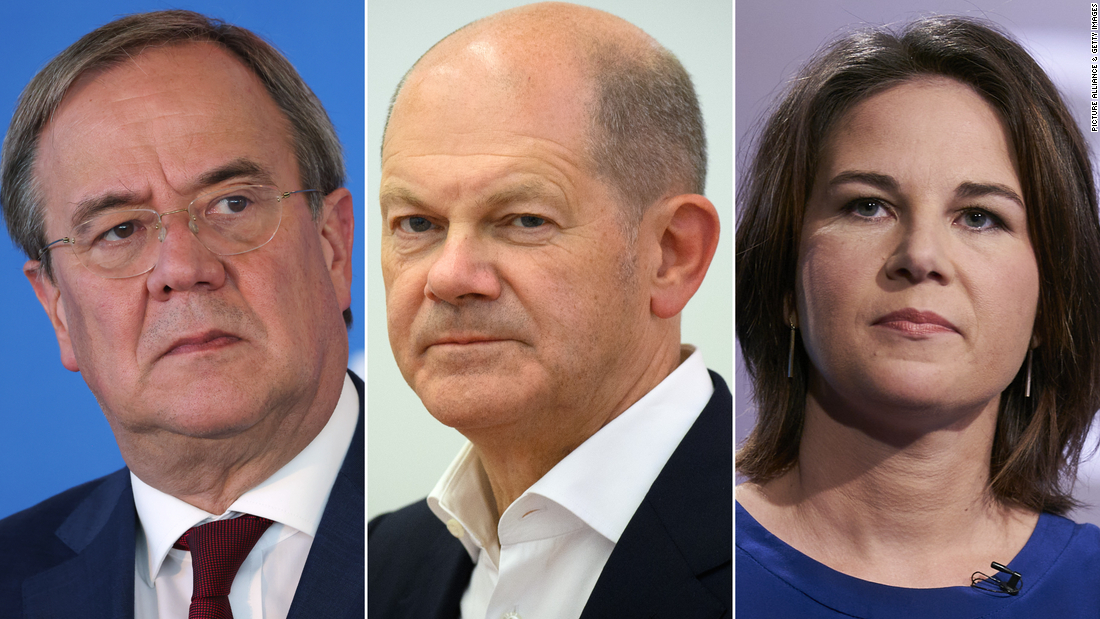 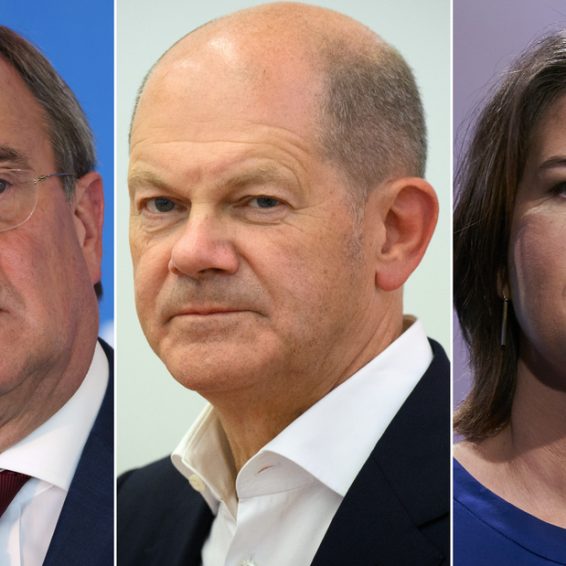 What does life after Merkel look like? Germans are set to decide in a tight election

4 weeks ago·7 min read
ShareTweetPinShare
Home
World News
What does life after Merkel look like? Germans are set to decide in a tight election
Chancellor Angela Merkel has been a symbol of stability in Europe since she took on the role in 2005; the chemist-turned-political mainstay has withstood a wave of populism, a financial crisis, a pandemic and Brexit to carve out an impressive legacy as the world’s most successful female leader.
But Merkel, 67, will step down once the repercussions of Sunday’s vote become clear, a move that has cast a sense of uncertainty over the weekend’s election.
Compared to the previous votes in 2017 and 2013, there is “much more chance of a significant shift in German politics and policy after the election,” according to Pepijn Bergsen, a research fellow who monitors the country for international think tank Chatham House.
The race to become Merkel’s successor is tight, and the ultimate victor may not be known for days or even weeks after polls close.
Read More
But for the first time in a generation, Germans will be deciding what post-Merkel Germany will look like. Whoever they turn to will face a catalog of challenges, both at home and abroad.

Merkel’s departure from the front lines of global politics has been a long time coming; she first announced in 2018 that she would not seek re-election at the end of her term, following a series of setbacks in regional elections.
In her time in office, she has dealt with five UK prime ministers, four French presidents, seven Italian prime ministers, and four American commanders-in-chief. Her period in power has been a remarkably eventful one, and Merkel’s imperturbable presence throughout has earned her an international reputation for stability and level-headedness.
“That worked very well politically for her in Germany, and on the world stage,” Bergsen told CNN. “Germany has done very well over the last 15 years from an economic perspective … (and) Germany didn’t do that badly during the financial crisis, but the realization has crept in that that won’t last.”
The European refugee crisis of the mid-2010s proved a major challenge to Merkel’s party, the Christian Democratic Union (CDU), and she has also earned detractors over her close relationship with China.
But after a pandemic which saw Germany fare better than many of its neighbors, analysts and polling suggest Merkel will leave office with the respect of most Germans.
“She’s seen very positively in Germany, because she’s associated with stability — people know what they’re getting,” said Ben Schreer, from the International Institute for Strategic Studies’ (IISS) Berlin-based Europe office.

Who’s in the race to replace her?

German politics is dominated by two parties — the center-right CDU and the left-leaning Social Democratic Party, or SPD — who have governed together in a coalition for the past eight years.
But other parties have grown in popularity over the past decade as the CDU and SPD have lost ground. This election is particularly close; the CDU and SPD have both held polling advantages, and the Green Party has also emerged as a serious contender.
Merkel’s successor at the helm of the CDU is Armin Laschet, 60, a long-time ally of the Chancellor and the party’s deputy leader since 2012. A devout Catholic whose father was at one point a coal mining engineer, he was selected as the party’s candidate after a torturous leadership tussle.
Laschet has a background in law and journalism, and was elected to the German Bundestag in 1994.
Merkel has voiced her support for Laschet, but despite her efforts to persuade Germans to stick with the CDU, polling suggests her replacement as the party’s leader has struggled to win over Germans.
His foremost opponent is the SPD’s Olaf Scholz, who has taken a surprise lead in the polls in recent weeks, leaving him as the marginal frontrunner heading into Sunday’s vote.
Like Laschet, Scholz has a long history as a political player in Germany. He has been Merkel’s finance minister and vice chancellor since 2018, placing him arguably in a better position to run as her natural successor than her own party’s candidate.
Scholz has earned increased visibility as he navigated Germany’s economic response to the pandemic, and cleared the last electoral hurdle with an assured performance in the final television debate.
But polls nonetheless suggest a huge number of undecided voters late in the campaign, increasing the unpredictability of the vote.
The Green Party’s leader Annalena Baerbock caused a brief sensation in German politics when she surged in the polls early in the campaign, prompting voters to wonder whether she could become the country’s first ever Green chancellor.
A 40-year-old former professional trampolinist, Baerbock stands out in a field of mostly male political leaders. And although her star has faded somewhat in the closing stretch, she has capitalized on voters’ climate concerns to establish her group as the third party in the race.
The far-right AfD remains a stubborn presence on the political scene, scrapping with the liberal Free Democratic Party for fourth place.
The refugee crisis that sparked the AfD’s surge in German politics has subsided as a pressing political issue, but the party remains an outlet for voters angered by immigration issues. In March, they became the first German party since the Nazi era to be put under government surveillance.

How does the voting work?

German elections to the Bundestag are run on a system of proportional representation, meaning that each party’s vote share relates directly to how many seats they get in parliament.
That principle makes it virtually impossible for a party to lead a government alone; coalitions must instead be formed after the vote, and these often contain more than two groups.
Many Germans have already cast their ballots; the pandemic has increased the amount of postal voting that took place before polling day.
Regardless of how they choose to vote, Germans are asked to pick their local lawmaker, and also their preferred overall party. Once the results come in, a race will start to put together enough seats to govern — meaning smaller parties can become kingmakers.
“Whoever wins on paper on Sunday night probably can’t be sure that he or she will actually lead the government, because there’s going to be so many permutations,” Schreer explained, adding: “We may not know until November, if we’re lucky.”

What are the issues?

All the candidates are caught in a Merkel-sized conundrum, as they attempt to define their own agendas while allaying Germans’ fears over a change in leadership.
Climate change has been a major factor in the country’s national debate, particularly after devastating flooding hit the country in July.
In Canada and Germany, the climate crisis is finally on the ballot. But can it win?
A push from Merkel has put environmental issues at the heart of German politics, and virtually all parties have stressed their green credentials.
In this campaign the Green Party has called for a 70% cut in greenhouse gas emissions from 1990 levels by 2030, compared to the current government goal of a 55% cut.
Economic worries have also come to the fore; in a last-gasp pitch to voters, Laschet said Monday that a left-wing coalition led by the SPD would cause a “severe economic crisis,” Reuters reported.
Laschet has also followed Merkel’s line regarding the European Union; in the final pre-election debate, he emphasized European cohesion as one of his flagship policies.
But the campaign has been mostly defined by domestic matters; a minimum wage hike and pension reforms are at the heart of Scholz’s campaign, and he stressed those plans again in the debate.

Will a Merkel-less Germany still lead on the world stage?

The global consequences of Sunday’s vote are clear; Merkel’s longevity saw her become Europe’s de facto leader, and it’s unclear whether her successor will fill the same role.
“Germany’s going to be faced with some significant foreign policy challenges which the new government has to take on,” Schreer said.
“The question is, who’s going to replace (Merkel), and will that person have the same charisma and ability that she did?” he added. “Allies are skeptical, and Germans as well are quite cautious in that regard.”
A key part of Merkel’s role was her steadfast determination to maintain European cohesion and paper over the cracks between EU member states.
“Macron will try to usurp Merkel’s position in Europe,” predicted Bergsen, signaling a possible shift in the balance of power towards France, Germany’s western neighbor. “The German position won’t necessarily change, but whoever now comes to power will have to deal with a broader (domestic) coalition so they will find it slightly harder to lead on the international stage.”
Looking further afield, Germany’s new leader will also have to balance the country’s relationships with the United States and China, two nations with whom Merkel attempted to maintain close ties.
And keeping the United Kingdom close after its departure from the EU is key. “The UK remains an important partner in strategic terms, and Germany knows that if the UK isn’t engaged in the European continent, then you will split the Europeans,” said Schreer.
“(Germany) is a well-respected country at the international stage — that is undoubtedly the case,” he added. “The question is: Does that now enable Germany to weather those international storms that are certainly coming?”