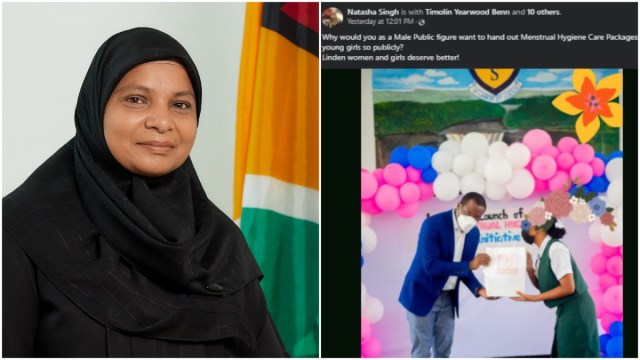 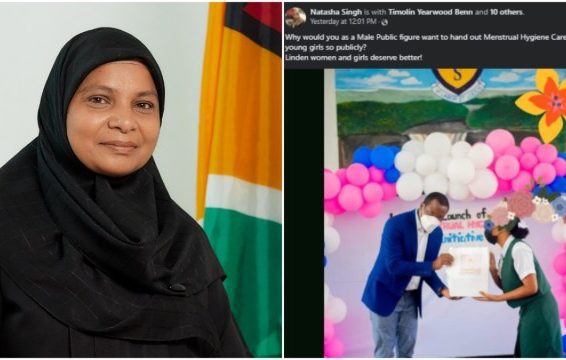 APNU+AFC Opposition Member of Parliament (MP) Natasha Singh is facing immense backlash over remarks she made in relation to the distribution of menstrual hygiene care packages to students.

The Office of the First Lady Arya Ali on Monday launched her Menstrual Hygiene Initiative in Region Ten (Upper Demerara-Berbice) where care packages were distributed to students there.

Guyana’s Minister of Foreign Affairs Hugh Todd was on hand to deliver some of the packages to the students there.

However, the APNU+AFC MP took to Facebook to express concerns over a man distributing sanitary pads to girls.

The MP posted: “Why would you as a male public figure want to hand out menstrual hygiene care packages to young girls so publicly? Linden women and girls deserve better!”

Her remarks did not go unnoticed as many users wasted no time in condemning the Opposition politician.

“Natasha Singh are you sure you are a woman??? It is because of people like you our young women often faced with challenges especially at a teenage! What is so wrong discussing period with a male? Some women never ceased to disappoint me with their illiterate statements and thinking! Your father never buy pads for you? Your husband never did? Your male cousins never did? Your brothers never did? Well I’m privileged to have men in my life that does this for me! Since when this is a Taboo? And if it is in Natasha’s book then you better end it now!! You too big fuh this!!!!” one user posted.

Another used contended that “many people love to complain that men have no interest in women’s health, and are too ashamed to discuss topics of female personal hygiene with their partners/ daughters/ female family members, etc., and when they finally step up and part of initiatives like this, it’s problematic. Personal hygiene isn’t a male or female matter, everyone should be privy to the importance of good personal hygiene and how to achieve same so that they can advise/ assist their peers if the need ever arises. Additionally, steps like these remove the taboo on the topic of periods. It creates a more open and comfortable mindset for young women who feared they can’t have conversations about menstrual health/ personal hygiene with males who are knowledgeable. Change the taboo.”

Another person posited that “Natasha Singh is the perfect example of what not to be in this day and age!! We must never attach a stigma to periods, it is quite natural and at times painful!! We no longer live in the stone age! Dear Natasha delete your post and get with the times!”

When contacted for a comment on the matter, Head of the Women and Gender Equality Commission Indra Chandrapal shared similar sentiments, noting that these are modern times and that public figures should understand the importance of raising awareness on traditionally taboo topics.

“There’s absolutely nothing wrong with that,” Chandrapal said, referring to the act of a man delivering sanitary pads to a young woman.

“I think the only way you can deal with people like that is, you have to make them aware that it’s okay to discuss these issues, just like, suicide or how we talk about domestic violence,” she noted.

“Take for an example, in 1989, domestic violence was considered a family affair, but after the Bill was passed in 1996, people realised and those never thought about it before, those that thought it was okay, but then when you start to promote the awareness, they realise it’s a human rights violation against the person (victim),” the activist pointed out.

“So, I would to say Natasha, come on, we’re living in modern times…we need to be worrying about those negative things that are taking place and those negative images that are happening on Facebook rather than somebody receiving sanitary pads…you need to wake up and smell the coffee…” she posited.

UNICEF has noted that schools often lack the supplies and sanitation facilities girls need for managing their periods and that girls without adequate healthcare may feel discomfort or pain. The organisation also noted that shame, stigma and misinformation may discourage girls from attending school while menstruating and prevent schools from teaching healthy attitudes about menstruation.

“Gender inequality, cultural taboos, poverty and lack of basic services undermine many girls’ and women’s ability to meet their health and hygiene needs. Emergencies like the COVID-19 pandemic can exacerbate these deprivations — especially among the most vulnerable — with far-reaching adverse effects,” UNICEF noted.

UNICEF further points out that “shame and misinformation about menstruation are a global problem, in both high- and low-income countries. A recent report found that menstruation taboos in East and Southern Africa can keep girls and women from touching water or cooking, attending religious ceremonies or engaging in community activities. Involving whole communities fosters a better understanding of menstruation. Communities are more successful at questioning taboos and reducing stigma when parents and leaders, and boys as well as girls, share in the effort.”

Guyana’s Education Minister had also disclosed that some 26% of students in the country cannot afford to purchase sanitary products and often females are forced to use their pads longer than required.

It is against this backdrop that Guyana’s First Lady embarked on the Menstrual Hygiene Initiative which has already been rolled out in a number of communities across the country. The initiative which seeks to end period poverty in Guyana is largely funded by through private sector donations.

The donations being made to female students across the country are not one-off but rather, are one year’s supply of menstrual hygiene products.