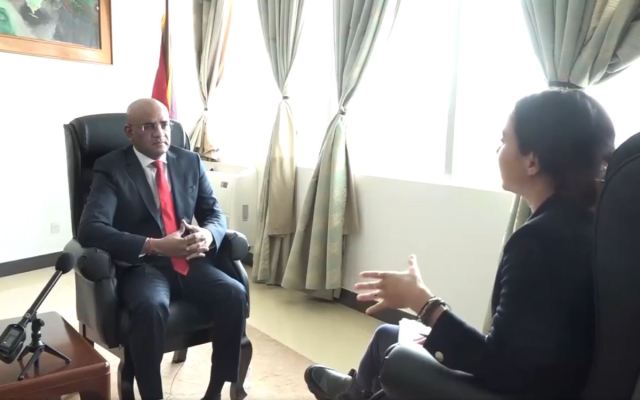 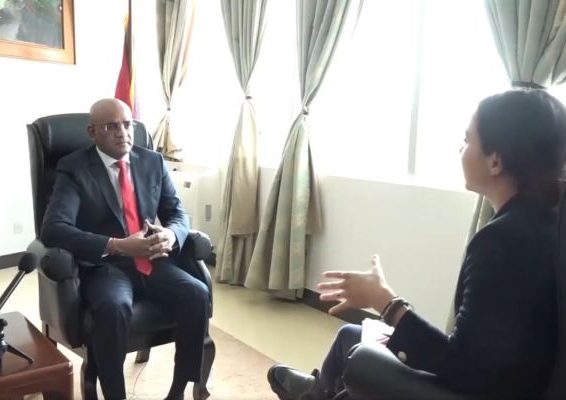 In the wake of the airing of a VICE News feature titled “Guyana for Sale” that contains allegations against Vice President Bharrat Jagdeo, sources indicate that legal action is likely to be taken against the parties involved in Chinese businessman Su Zhi Rong being caught on camera by the news agency making these allegations.

Social media commentary on an episode on Guyana by United States-based media outlet, VICE News, which aired on Sunday evening, was dismissed by senior officials within the Government since the interview was released on February 5, 2022.

The full interview was aired February 5 following the two-hour interview with Vice President Bharrat Jagdeo by a journalist of VICE Media Group, which was conducted on February 1, 2022.

In the interview aired on Sunday by Showtime television network, which is now only 16 minutes, Su Zhi Rong, who operates in Guyana, claimed to be close friends with Guyana’s Vice President, Bharrat Jagdeo.

In the same breath, however, he also made clear in the undercover interview that Jagdeo does not take bribes. In the preview released ahead of the full airing, Su Zhi Rong is also heard referring to Jagdeo saying, “his hands are very clean.”

At no point in the full recording of the episode did VICE News present any evidence of wrongdoing or corruption on Jagdeo’s part. In the full recording, however, Su Zhi Rong was recorded using Jagdeo’s name in trying to negotiate a payment from the undercover VICE operator posing as a Chinese investor.

When the Vice President was visited at his house by Su Zhi Rong and the undercover VICE crew (the journalist posed as the secretary of the undercover investor), Jagdeo in the secretly recorded conversation did specify that he can assist with investment deals but made it clear that he will not get involved in any financial dealings.

“No no, I’m not getting involved with business… my thing is that I’m in Government. So, I assist from the Government side. That’s it,” Jagdeo said, after which Su Zhi Rong spoke to the Chinese ‘investor’ in Mandarin to further solicit the bribe, so that the Vice President could not realise that he was being used.

Persons falsely using Jagdeo’s name to solicit money from investors is nothing new and in fact Jagdeo had cause to publicly warn investors during a press conference last month, not to fall for this scam.

During his press conference, Jagdeo had given a recent example of someone being arrested right at Office of the President, for this very offence. The Vice President recalled that the man, who was a complete stranger to him, took a photo next to him and then later used this photo to collect money from companies on the false promise that he knew Jagdeo and could act as a liaison between them and the Vice President.

“He then showed up here, because my secretary called and arranged a meeting. He showed up with another person he was conning, bringing to the meeting. And he was arrested right here,” Jagdeo had said.

“So, this is going on, it has become almost like an industry, where people claim they are representing companies and I don’t know what they are representing to these people. So, if anyone is stupid enough to lose your money by thinking you will get any preferences, because someone arranged a meeting with some policymaker, it’s your loss.”

In February, the Vice President in response to the interview had said: “I help a lot of people but without consideration… I see lots of companies, but is not for money or a bribe… She asked me about the laws we are changing to help the contractors… she then went on to say that Su said we have changed the Constitution of Guyana so we can give them contracts… I don’t know that I have the power to change the Constitution of Guyana to give contracts to people.”

The Media Group has been on a downward spiral in recent years and is clearly trying desperately to survive by inventing “exposés” of corruption in developing countries to feed the old colonial narratives in its North American markets.

In May 8, 2019, Disney had told investors that it had wiped out US$353 million of the money it had previously put into VICE. A month later, on June 10, 2019, HBO cancelled Vice News Tonight, putting an end to its seven-year relationship with VICE.

A year later, the downward spiral continued when VICE laid off 155 employees in May 2020. Finally, in August 2021, they launched a new wave of layoffs, reflecting the youth-culture media company’s ongoing financial struggles and need to realign toward profitable areas of the business — amid a broader shift toward video and visual content. 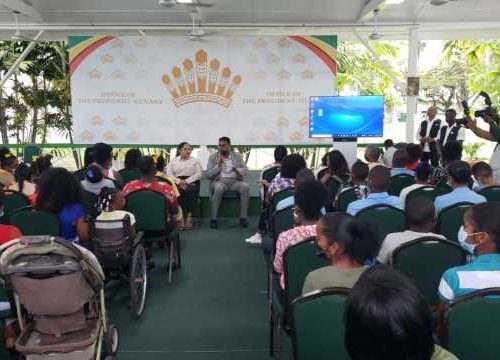 Pres. Ali announces $100,000 for every child with a disability

During the interview, after asking innocuous questions about the policies of the Government on investment in light of the massive oil find, the reporter suddenly alleged that based on “information” she had received, a Chinese logger named “Su” claimed that the only way to do business in Guyana was to pay incentives.

These allegations were immediately rebutted. The reporter’s line of questioning suggested that Guyana was taking financial incentives from the Chinese hence most of the contracts that are being awarded were given to Chinese contractors.

The Vice President had previously said that he knew ‘Su’, who was a tenant at his property, but he cannot respond to questions on hearsay that either the reporter or the claimed informant could have concocted.

He said that if there is evidence that ‘Su’ was using his name for financial gain then he will have to take legal actions against the businessman.

On February 9, the Chinese Embassy based in Georgetown, Guyana, slammed the distortion of the facts on Guyana’s bilateral relations with China, making it clear that relations with the two countries, inclusive of business relations, are founded on the law and international practices.

According to the statement from the Chinese Embassy, which is headed by Chinese Ambassador to Guyana Guo Haiyan, “China-Guyana friendly cooperation, featuring equality, mutual benefit, innovation, openness, and benefits for the people, is in accordance with the interests of the two countries and two peoples, not against any third party, nor should it be influenced by a third party.”

From a business perspective, Haiyan was adamant that Chinese companies operational in Guyana adhere to all applicable laws. From a foreign policy perspective, she also expressed China’s appreciation for Guyana’s support for the One China principle.