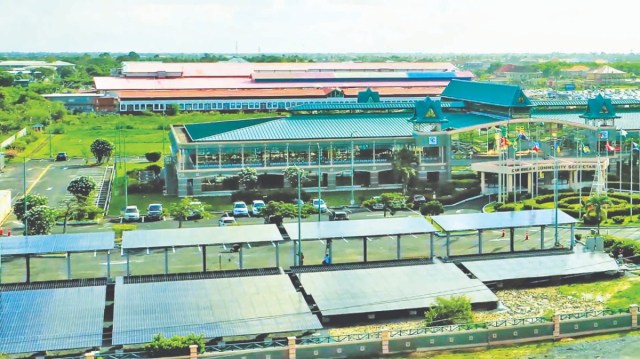 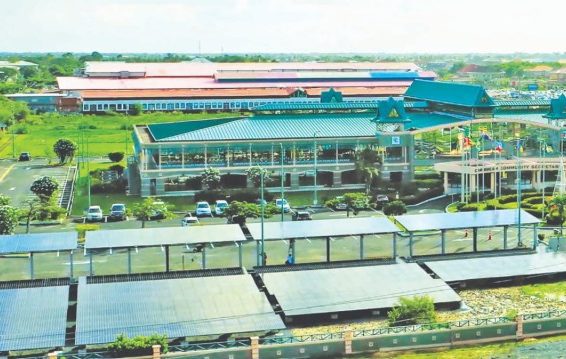 A US$7 million Japanese-funded Solar Photovoltaic Power Generation Plant was on Tuesday handed over to the Caribbean Community’s (Caricom) Secretariat at Liliendaal, Greater Georgetown, with Japan’s Ambassador to Guyana Tatsuo Hirayama using the opportunity to talk up strengthening ties with Guyana and the Caribbean region.

“Last year… our then Minister for Foreign Affairs (visited) Jamaica. The Minister discussed a wide range of bilateral, regional and global issues, along with the cooperation between Japan and Caricom. We certainly would like to continue, as well as strengthen our dialogue with Caricom member countries.”

“Japan and Caricom also share certain challenges, nationally, regionally and globally, including natural disasters, climate change and the prolonged COVID pandemic. However, I am proud to note that our collaboration has been progressing in a bilateral way at the community level, making us more resilient,” Hirayama said.

The Ambassador further referenced the assistance Japan has given to Caricom member states on the COVID-19 pandemic, through the CARPHA initiative. However, President Ali also spoke of the importance of partnerships and also urged Japan to lend further assistance in the area of renewable energy.

“I, like the Prime Minister, would encourage our friends from Japan that have mastered a lot of this technology, to also work aggressively… and for you to leave a strong message among the member states, not just Guyana, of our commitment to this form of energy and see how maybe you can work proactively in supporting many of the initiatives we are seeking to pursue,” President Ali said.

“Now Guyana has actively pursued renewable energy opportunities, as part of our energy mix. We are a member of the International Solar Alliance and have been working closely over the past 10 years, with the Energy and Resource Institute, to support the smart development of renewable energy,” he further explained.

According to the President, much of this development was focused on key sectors like manufacturing and agriculture. Additionally, they have been engaged in building capacity and developing technology. He suggested that Guyana is at a stage where it can share some of this resource with the region.

“Dr (Mahender) Sharma, who is here from the (Guyana) Energy Agency, can speak in a very elaborate manner on the various programmes and projects we have carried out so far in building capacity. And this is something we’re willing to share with the rest of the region.”

“We’re willing to share this capacity; we’ve built up quite some amount of human resource capacity. We’ve built up a strong planning unit and approach and we can help through the planning perspective,” President Ali also said.

The 400-kilowatt solar generation project was undertaken through a US$17.8 million grant agreement between the governments of Guyana and Japan, US$7 million of which was earmarked for the project. With more than 1500 solar panels available, the Secretariat is expected to have a net-zero energy balance. Additionally, excess energy will be contributed to the national grid… once a power sharing agreement is concluded with the Guyana Power and Light (GPL).

Prime Minister Phillips explained that the solar panels should have been handed over since 2020. However, the onset of the COVID-19 pandemic caused delays in getting crews to Guyana to complete the project.

“On April 30, 2020, works on the project had to be temporarily suspended due to the measures implemented by Guyana and by many countries around the world, to contain the COVID-19 pandemic. Specifically, the supplier was unable to dispatch staff to supervise the installation and commissioning of the equipment. However, works resumed on June 1, 2021, and commissioned on December 20, 2021,” Phillips said, also expressing the hope that more such projects will be replicated.