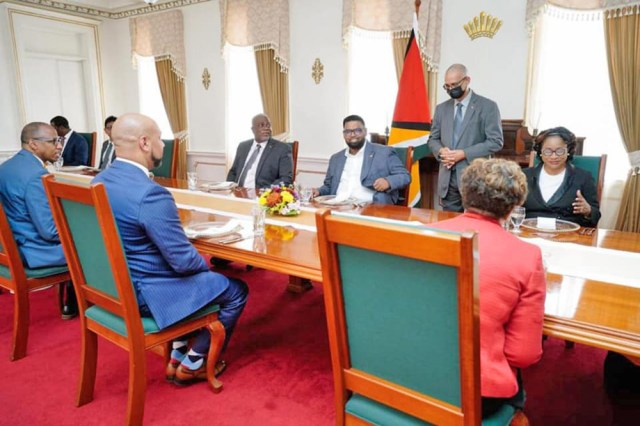 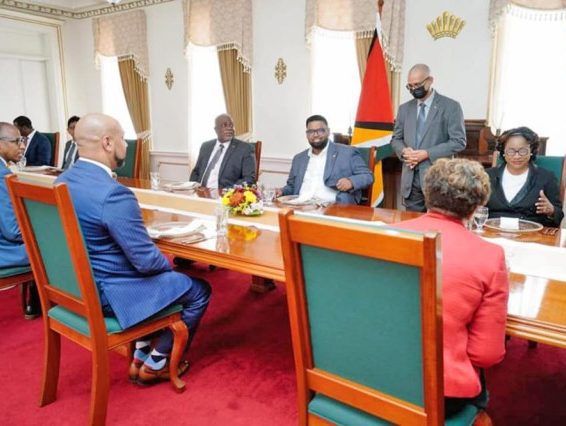 With Guyana still in the process of outfitting itself with the necessary capacity as an oil-producing nation, local Attorneys-at-Law could soon benefit from training from the United States National Bar Association, which has indicated its willingness to equip lawyers here with oil and gas expertise.

On Wednesday, President Dr Irfaan Ali met with the delegation for brief discussions after which he hosted a luncheon in their honour.

The US National Bar Association is in Guyana to establish partnerships with the local Bar Association, the Attorney General Chambers, and the Office of the Director of Public Prosecutions in order to invest in the development of Guyana.

Against this backdrop, the visiting delegation also met with AG Nandlall and staff of his Chambers on Wednesday.

During the engagement, the visiting team indicated that they were willing to collaborate in line with the needs of the Guyana Government. More specifically, it was related that they were ready to assist with equipping local lawyers in the area of oil and gas expertise.

In this light, the Attorney General suggested that the American Bar Association could facilitate the arrival of an expert in law reform to assist the recently-established Law Reform Commission (LRC).

Other areas in which the US Bar Association can partner with Guyana include exchange of interns and legal experts and seminars with local Attorneys, Nandlall informed the team.

He also outlined that his role was separate and distinct from the Director of Public Prosecutions, and further explained the legal system of Guyana, namely that Guyana is a common law country and that the Constitution was the supreme law which recognises the principle of the separation of powers.

AG Nandlall further informed the visiting team that members of the legal profession in Guyana played an important role in society by ensuring that justice was upheld, adding that the AG Chambers had a great working relationship with legal professionals in the United States of America, as law students have interned at the Chambers.

Meanwhile, other areas of discussion centred on electoral reform and the importance of the rule of law. Both teams agreed that respecting the rights of voters was sacrosanct.

Wednesday’s engagements with President Ali and AG Nandlall followed the visiting delegation’s meeting with Parliamentary Affairs and Governance Minister Gail Teixeira and Prime Minister Phillips at his office on Tuesday. At that engagement, the US Bar Association officials were informed of the Guyana Government’s inclusive approach to development and its commitment to the rule of law.