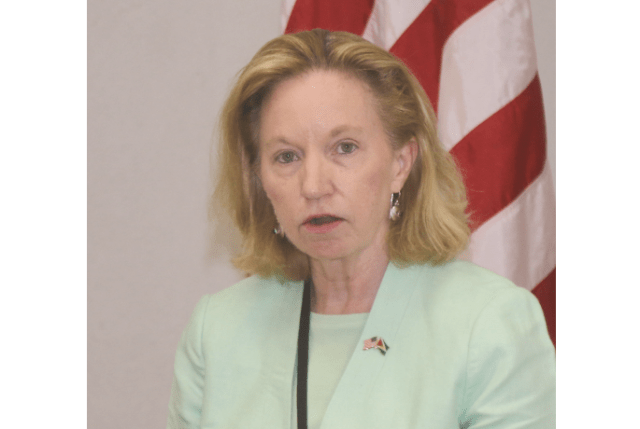 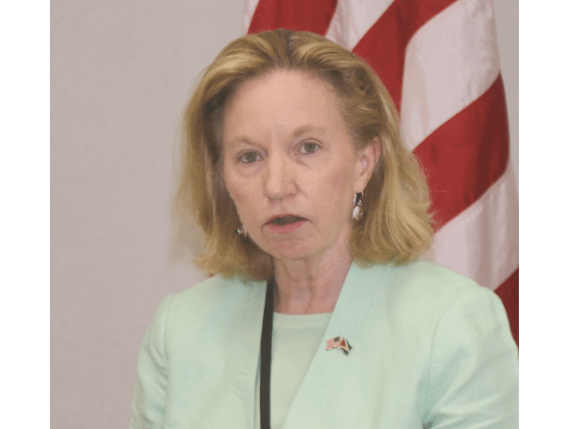 With Guyana recording some progress from 2019 to 2021 in the US Chamber of Commerce rule of law global dashboard, United States Ambassador to Guyana, Sarah-Ann Lynch has expressed pleasure at the steps that have been taken and urged the Government to stay on track.

The American Chamber of Commerce of Guyana (AmCham Guyana) held a virtual seminar on Wednesday, where the rule of law in Guyana was the topic of discussion. During the seminar, the Ambassador referenced the fifth edition of the US Chamber of Commerce Global Rule of Law and Business Dashboard report.

The report shows Guyana improving its overall rule of law dashboard score from 44.32 in 2019 to 48.73 in 2021, an improvement of 4.41 that the diplomat lauded and encouraged the Government to continue.

“Today’s event is auspicious, as it comes only a week after the chambers publication of its Global Rule of Law and Business Dashboard 2021. I encourage you all to review the document, on the US Chamber’s website. And I’m pleased to report that Guyana’s score has improved,” the Ambassador said.

“I want to underscore the importance of the US Chamber of Commerce’s five pillars, for measuring the rule of law and drawing foreign investment. Those pillars are transparency, predictability, stability, accountability, and due process. If these principles become the routine standard for doing business in Guyana, this nation’s future will indeed be full of promise.”

She noted that there was a direct link between the international community’s efforts to uphold the rule of law in Guyana during last year’s General and Regional Elections controversy and the five pillars. Additionally, the diplomat warned that those who promoted democracy last year should also be promoting these pillars.

“In Guyana, we at the US Embassy also invoke the US Chamber’s five principles underpinning the rule of law, in addition to implementing international best practices in procurement and promoting mutually-beneficial local partnerships,” Lynch said.

“I see a direct line between the commitment of the international community to the rule of law in the 2020 election cycle and the role of the five principles in promoting the rule of law in Guyana’s commercial climate, so that it fosters equality, economic growth, and shared prosperity for all Guyanese,” Lynch said, also noting that the US was looking forward to the Local Content Report and the Natural Resource Fund (NRF) Act being finalised.

Meanwhile, Attorney General Anil Nandlall, SC, another of the speakers at the event, assured the seminar that with Guyana now being governed by a democratically-elected government, the rule of law and the Constitution would be upheld.

“This has brought with it public confidence and an avalanche of interest from investors across the globe, in a manner never seen before. Once these investments begin to manifest themselves, the rule of law will continue to play a dominant role in our society,” the Senior Counsel said.

“I can go on, but time will not permit me. I hope, however, that I have been able to establish that there is a deep correlation and indeed nexus not only between the rule of law and a competitive business environment, but the rule of law being the foundation of economic and social progress in any given society.”

It is expected that once the NRF Act, which stipulates that various committees must be established to provide oversight for the Fund, is reviewed, it will be brought to the National Assembly by the current Government.

In keeping with its manifesto commitments, the Government has pledged to implement a number of measures to ensure accountable and transparent management of the country’s natural resources, including establishing an arm’s length Sovereign Wealth Fund insulated from political interference, and upholding the Santiago Principles of transparency and accountability, and the Extractive Industries Transparency Index (EITI).