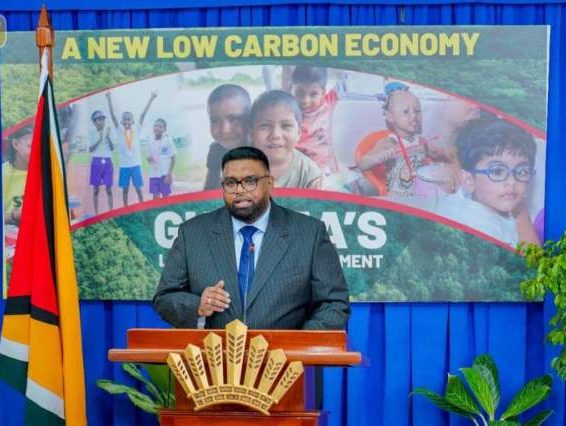 Being a major oil producer does not mean that Guyana will have to compromise on its already low carbon footprint.

This is according to President Dr Irfaan Ali who on Thursday launched an ambitious plan, the expanded version of the Low Carbon Development Strategy (LCDS) which sets out to ensure the country reaps the benefits from the lucrative oil sector while maintaining its global commitment to fighting climate change.

During the launch, the Guyanese Head of State defended the oil production activities offshore Guyana saying that it unfair to ask developing countries not to tap into their petroleum resources for the betterment of their people while incumbent oil-producers continue to enjoy the riches of such exploration activities.

The LCDS 2030, among other things, outlines how government intends to align Guyana’s status as an oil and gas producer with being active participant in the global search for climate solutions.

According to President Ali, the revenues that will be earned from the oil discoveries offshore Guyana, where production commenced in the Stabreok Block since December 2019, can transform the country and create unprecedented opportunities for its people.

However, President Ali recognised that the global market for oil and gas will not last forever especially in the coming decades as the world decarbonises in line with the targets of the Paris Climate Agreement and the need to stabilise global temperature increases at 1.5 degrees above pre-industrial levels.

“Actively managing the development of this marketplace in line with global decarbonisation targets is a challenge that the world continues to fail to grasp. This is why demand for oil and gas to safeguard global energy security continues to be high, rebounding after a slowdown due to the pandemic. Global policies are needed, and if they are to work, they must be fair, economically rational and based on science,” he noted.

Against this backdrop, the Guyanese leader argued that it is unfair to expect developing countries like Guyana not to explore its petroleum resources.

“Basic fairness means that the oil industry, and its US$3-4 trillion of annual revenue, should not just be for the benefit of incumbent oil producers, particularly when those incumbents are already very wealthy. Expecting developing economies to leave their oil in the ground really means protecting the monopoly-like situation of existing producers so that they can maximise their income from oil and gas,” he contended.

The Head of State pointed out that the three major global oil producers produce about 24 million barrels today – the level of oil production that needs to be reached by 2050 to align with the Paris goals. He opined that it would be perverse if the market was protected for them alone. In fact, he highlighted that the world’s largest oil producer – the United States of America – has a per capita income of US$65,000 which is about 10 times that of Guyana’s.

“No responsible government should volunteer that its people stay poor so that richer countries can have their market protected. Putting faith in solutions that expect this to happen is irresponsible and ultimately damages the prospects of climate success,” he maintained.

Nevertheless, President Ali outlined that in order to drive global decarbonization, there needs to be a global price on carbon, levied on the consumption of oil and gas. This, he said, is the way to incentivise both the investment in lower carbon replacements for fossil fuel-based electricity and transportation such as renewable energy and electric vehicles, while at the same time managing the global low carbon transition through incentivising progressively lower-carbon sources of fossil fuels.

“Most of this was in developed countries, which are already the incumbents benefiting most from the trillions of dollars in the oil and gas market. The Government of Guyana supports calls for the elimination of such fossil fuel subsidies, especially in OECD [Organisation for Economic Co-operation and Development] countries where the subsidies are the most distorting, destabilise prices, and do nothing to reduce the carbon intensity of the world’s economy,” he stated.

President Ali believes that these two policies alone can create a much fairer marketplace for oil and gas that is compatible with achieving the goals of the Paris Climate Agreement, adding that Guyana will not shirk its responsibilities in such a marketplace.

In the same breath, the Head of State reassured that Guyana will pursue strong policies to ensure that its oil and gas sector operates to international standards. He added that his government is already working to eliminate flaring from oil production, except in the case of genuine emergencies.

“When my Government took office in 2020, there were no safeguards in place to disallow flaring. As a result, we introduced one of the very few taxes on flaring in the world – where beyond the commissioning period, all flaring will be taxed at US$45 per tonne of carbon, along with the actual gas lost. For newly-licensed production, the tax on flaring will be accompanied by legal limits on the overall amount of flaring. In parallel, with advancing a “no flaring” policy, new measures have been introduced to ensure that all waste management is the responsibility of the oil producer, in accordance with international standards, from “cradle to grave”,” Ali noted.

He went onto say that government will continue to engage oil producers to also ensure that exploration and production operations will explore all opportunities for lower carbon technological innovation – including the use of renewable energy in oil production, Carbon Capture Utilisation and Storage (CCUS) and – when technologically viable – green hydrogen.

“My Government will meet our responsibilities to the people of Guyana by maximising the benefits to be accrued from the oil and gas industry while at the same time advocating for global policies to create a level playing field to align the global marketplace for oil and gas with the goals of the Paris Climate Agreement. But to only focus on oil and gas is to be short-sighted. In all scenarios, a future global economy will decarbonise, so the other two themes of the LCDS 2030 look beyond the oil and gas sector,” he asserted.