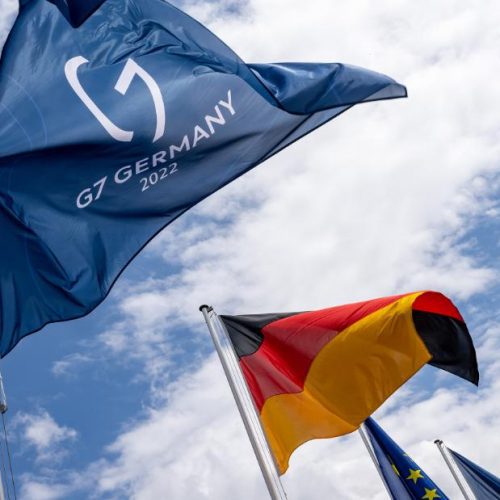 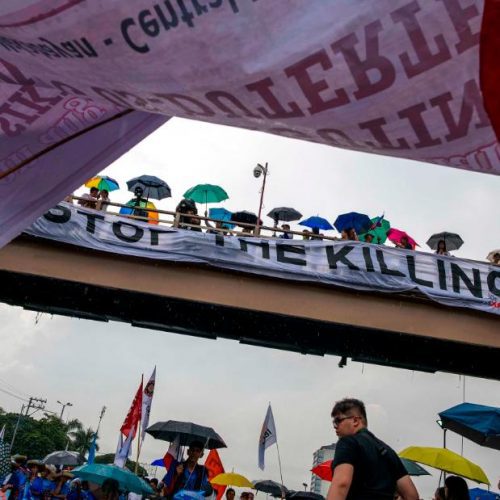 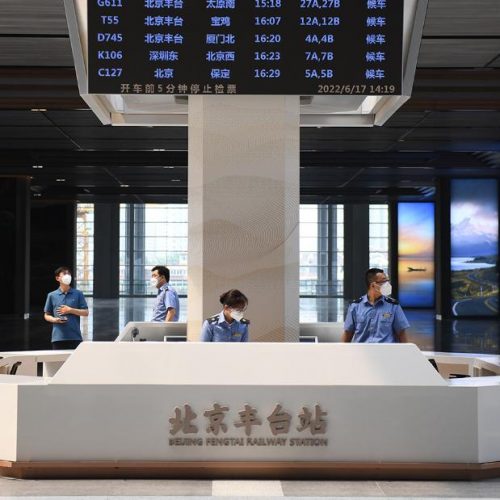 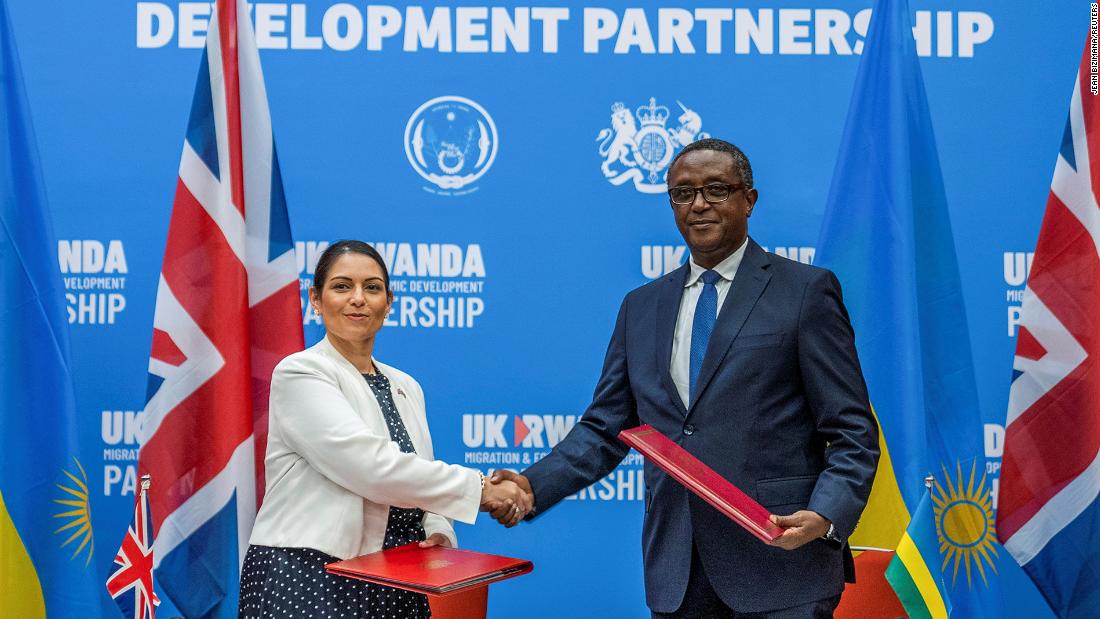 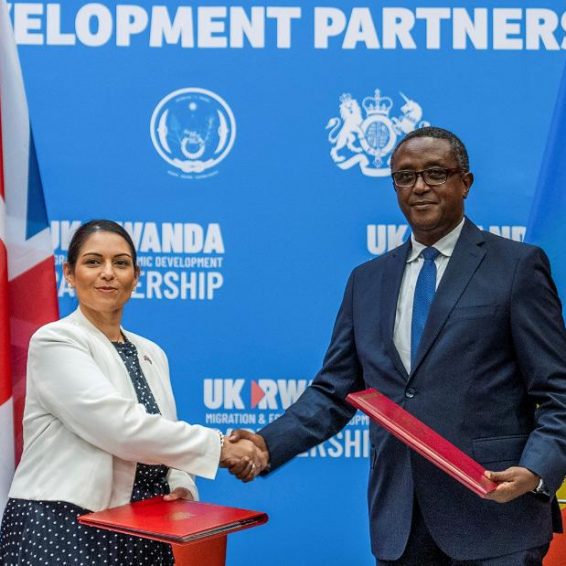 (CNN)The United Kingdom’s controversial plan to send asylum-seekers to Rwanda as early as next week was green-lit on Friday, after the High Court in London denied an injunction to block the first flight.

Britain’s government announced in April that it had agreed a deal to send asylum-seekers to the East African country, in a move that it insisted was aimed at disrupting people-smuggling networks and deterring migrants from making the dangerous Channel crossing to England from Europe.
A challenge to block the deportation flights was brought by human rights groups Care4Calais and Detention Action, along with the Public and Commercial Services Union (PCS), a trade union representing civil servants in Britain’s Home Office, and some asylum-seekers facing deportation to Rwanda. They claimed UK Home Secretary Priti Patel’s policy was “unlawful on multiple bases,” and sought an injunction to stop the plane from taking off.
The claimants also challenged Patel’s legal authority to carry out the removals, the rationality of her claim that Rwanda is generally a “safe third country” given its human rights record, the adequacy of malaria prevention in the country and whether the policy complied with The European Convention on Human Rights.
But Justice Swift rejected the campaigner’s urgent injunction at London’s Royal Courts of Justice on Friday, saying on the “balance of convenience” there was a “material public interest” in allowing the flights to go ahead while the judicial review was ongoing.
Read More
Both Patel and UK Prime Minister Boris Johnson welcomed the court’s decision on Friday. “We cannot allow people traffickers to put lives at risk and our world leading partnership will help break the business model of these ruthless criminals,” Johnson said on Twitter.
British Home Secretary Priti Patel shakes hands with Rwandan Foreign Minister Vincent Birutaare after signing the partnership agreement at a joint news conference in Kigali, Rwanda, on April 14.
Rights groups have vowed to fight on. Care4Calais said they have been given permission to appeal the ruling on Monday “as we are deeply concerned for the welfare of people who may be forcibly deported to Rwanda, a fate that could profoundly harm their mental health and future,” the human right’s group founder Clare Mosley said in a statement.
“Today was just the beginning of this legal challenge. We believe that the next stage of legal proceedings may bring an end to this utterly barbaric plan,” she added.
The United Nations Refugee Agency and other international human rights groups have also opposed the plan, arguing that it would increase risks and cause refugees to look for alternative routes, putting more pressure on front line states.
Two days ahead of the High Court decision, Detention Action Deputy Director James Wilson said in a statement that Patel had “overstepped her authority” in her “desire to punish people for seeking asylum by forcing them onto a plane to Rwanda.”
“By rushing through what we say is an unlawful policy, she is turning a blind eye to the many clear dangers and human rights violations that it would inflict on people seeking asylum,” Wilson added.

‘Dig in for the fight’

The High Court’s decision was handed down as Johnson comes under increasing scrutiny from members of parliament to prove the policy’s success.
Johnson told the Daily Mail that he expected a lot of legal opposition to the policy, but said the government would “dig in for the fight.”
‘We’re ready for that. We will dig in for the fight — we will make it work. We’ve got a huge flowchart of things we have to do to deal with it with the Leftie lawyers,” he said in an interview in May. He added that 50 people had already received notices warning that they faced removal to Rwanda.
The government has said the plan to send people to Rwanda would initially cost ?120 million ($158 million), with funding provided to support the delivery of asylum operations, accommodation and “integration.”
The Home Office announced on June 1 that people who had undertaken “dangerous, unnecessary, and illegal journeys, including crossing the Channel” were among those being issued notices for removal to Rwanda. “While we know attempts will now be made to frustrate the process and delay removals, I will not be deterred and remain fully committed to delivering what the British public expect,” Patel said in a statement.
Britain’s economy is in a bad place. Removing Boris Johnson might help
The plan is also facing a second legal challenge from refugee charity Asylum Aid, which applied for an urgent injunction on Thursday to prevent any flights from leaving.
Prior to Friday’s ruling, Care4Calais’ Mosley told CNN that the charity was working with more than 100 people who have received notices. Many fled persecution or conscription in their home countries to seek a better life in Britain and are terrified of being sent to Rwanda.
“So many of them have told me I would rather die than be sent to Rwanda,” Mosley said in an interview in the French port city of Calais, where the charity provides assistance to refugees living in and around the city.
Many asylum-seekers continue to travel to Calais, where a camp known as the “Jungle” drew global media attention at the height of Europe’s refugee crisis in 2015, before it was demolished by authorities the following year.
Thousands of people each year risk the dangerous journey across the English Channel, a relatively narrow waterway between Britain and France, and one of the busiest shipping lanes in the world.
More than 10,000 people have crossed the Channel in small, rickety boats so far this year, according to analysis of government data by the PA news agency. Last year, more than 28,000 made the crossing.

CNN’s Nada Bashir and Joseph Ataman contributed to this report from Calais.