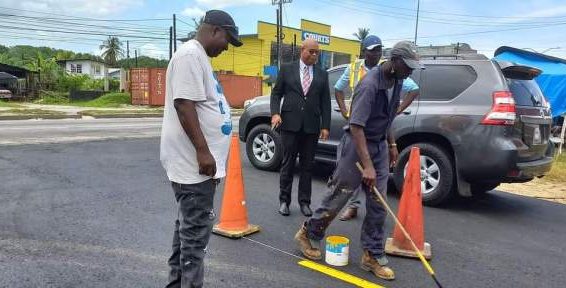 Traffic flow in Diamond, Grove to improve with upgraded infrastructure

To this end, the Minister said the government is making every effort to reduce traffic congestion.

“This might be a small but very, very important intervention. Thousands of people will benefit from, as a result of these small interventions that are made to improving the traffic flow.”

Works commenced just over a week ago and has seen the timely execution of milling and paving of an entire section of the Diamond Bridge to Jimbo Bridge roads.

Upon inspection, the Minister said the engineers have identified a spot along the road that is depressed and will immediately begin rehabilitative works.

With the improved paved road between Diamond and Jimbo bridges, the Ministry will be installing a slip lane, which will prevent motorists heading north or turning into Diamond from hindering the flow of traffic behind them.

Minister Edghill said an extra carriageway has also been paved to add to improve traffic flow.

Further, an alternate route has been rehabilitated for persons residing in the Diamond Housing Scheme to enter and exit through Avenue A and B instead of the usual route at the Diamond Junction. 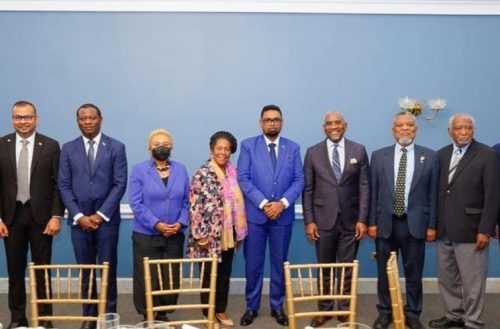 The government is aiming to have the road further rehabilitated until it reaches First Avenue in the Scheme.

Meanwhile, Officer in Charge of Traffic, Maniram Jagmohan who has jurisdiction from the arch at Agricola to Moblissa on the Soesdyke-Linden Highway, highlighted the benefits of the project.

“The newly paved road already started to assist the residents of Diamond in a great deal of a way. Also, with the newly paved road from the Diamond junction going to Jimbo bridge we have seen a great deal of improvement as it relates to the traffic flow. So, Imust say thanks minister for your intervention and the team for the slip lane at the Diamond Junction because the north bound traffic heading to Georgetown from the East Bank corridor will get to flow continuously,” he said.

The ministry is also actively working to remove encumbrances along the roadways and the Diamond, Grove area is no different. To this end, a market tarmac has been constructed to remove vendors and hire taxis from plying their trade on the roadways.

Minister Edghill said taxis parked on the shoulders of the road pose major traffic and safety issues that are being addressed.