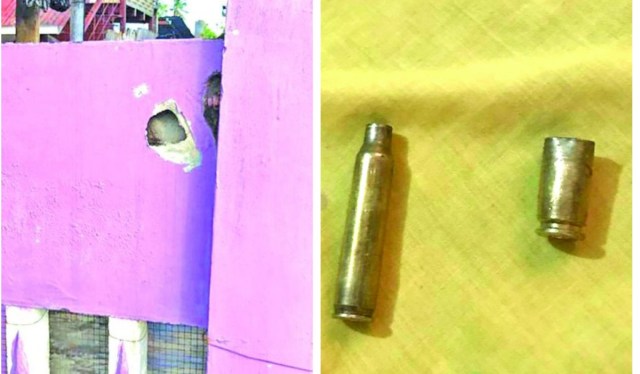 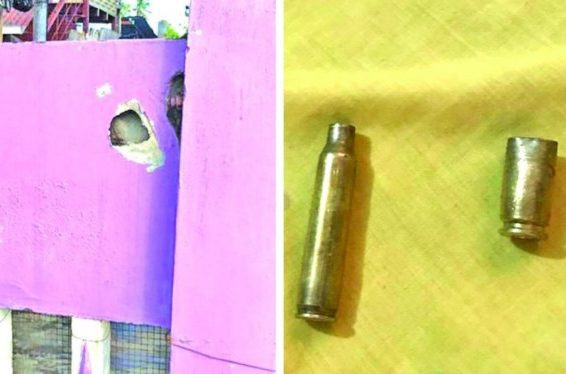 2 months ago·2 min read
ShareTweetPinShare
Home
Local News
“This is my career…I’m not going to run away” – Police Prosecutor says about attack on his house
The content originally appeared on: INews Guyana

As Police continue its probe into the riddling of bullets on the home of Police Prosecutor, Corporal Hemchand Sukhna, who is stationed at the Diamond Magistrates’ Court, East Bank Demerara (EBD), he is adamant that this will not deter him from his duties.

“This is my career and it’s not like I am going to remove from here…I am not going to run away, or show people that I am frightened but I am afraid inside… I have been living here for 15 odd years and I don’t have no issue with anybody…,” the prosecutor said.

Sukhna, who is still shaken by the incident, said the shooters have created an atmosphere of trepidation, which he is yet to recover from.

In an interview with this publication, the Corporal said he had received threats from someone whom he suspects is behind the shooting incident, and the Police are currently putting the pieces together to confirm his suspicion.

“There is a particular person that I would have given the Commanders his name because he was released from prison and during his trial, he would have threatened me…I thought those were empty threats but I now see something totally different,” he said.

Sukhna added that as a Police officer, one is constantly greeted with events and situations that threaten his life, but he fears for his life even more now that he “has to keep looking over” his shoulders.

“I don’t know if it can be the same person, if it can be somebody else, and sometimes another person can say okay somebody did it already, they can also come and shoot up by me,” the man expressed.

In addition, he said that he does not know what form of protection he will be taking or will be given to guarantee his safety. He said he now fears for his colleagues across Guyana who are prosecutors, and hopes that they do not face the same fate.

“Until you face it or actually feel it then you know exactly what goes down. People threaten you daily; in court, out of court but sometimes you don’t take that for anything. There are conversations between me and the Commander and the Commissioner, and I am not sure what might go down, but I know that something is in the pipeline,” he said.

The prosecutor’s home came under gunfire at around 21:00h on November 7 while he and his family were in their yard.

The family, while socialising, heard loud explosions sounding like gunshots and ran for cover.

It was then two men wearing hoodies and armed with guns were seen standing in front of the home firing shots into Sukhna’s yard and in their direction.

The shooting, which was captured on CCTV cameras, lasted for about a minute before the gunmen made good their escape.

Just after the incident, Police ranks responded to the scene, where two .40 spent shells and five .22 spent shells were recovered from the scene.

According to Sukhna, Police are currently reviewing a second CCTV camera that should reveal the identity of the shooters, as investigations continue.

“They [the Police] are presently pursing another footage which I think once that is acquired, it will bring more clarity as to the person, or one of the persons whose name I would have given as one of the shooters along with somebody else.”

Sukhna has been working in the Force for about 20 years, and this is the second attack on his life. The first incident occurred some eight years ago when he was beaten and robbed after exiting a bus on the Craig Public Road. [First published in the Guyana Times]