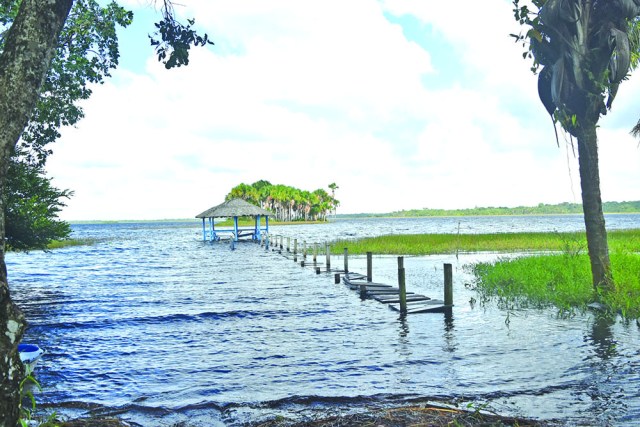 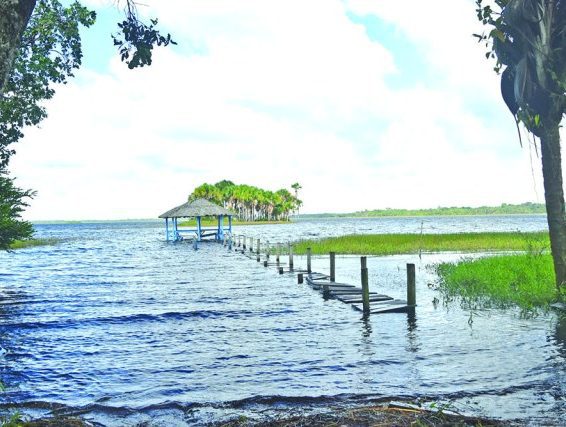 Tapakuma: A budding tourist destination in a quaint Indigenous village

These are the things that movies are made of: a rustic trail, being a mixture of loam, sand and stone, a bumpy ride for any type of vehicle but the scenery pays dividends for your troubles.

As the trail winds, dips and ascends, a lush green canopy creates a barrier between explorer and the piercing sun. But the sun refuses to be left out of this picturesque scenery, as its rays force its way between the tall looming trees that enclose the forest.

This trail is one that you’ll never forget. As several exotic animals peek out from their wooded abodes to catch a glimpse of those who return their stares in awe. Just when the vast red loam smoothens the trail, it comes to a stop, for a demanding creek that is adamant about adding to all the wonders previously witnessed on this trail. A kissing bridge, as Guyanese would casually call it, allows Guyana’s signature “black waters” to carry on flowingly, as it opens up into the personification of “the simple life”.

This trail is the epitome of eco-tourism, the perfect sightseeing package and the history that unfolds at the village’s gate is what will keep potential tourists enthralled and thirsty for more. This trail belongs to St Deny’s Tapakuma Village, and the people are willing to share this treasure with all those who are willing to take the trip.

Casually referred to as “Tapakuma”, the now thriving Indigenous village was, over a century ago, just a settlement formed by several families. As told by the village’s Toshao, these settlers travelled from two other villages in the Pomeroon.

“The history Tapakuma started over a hundred years ago, our fore-parents actually came from the other Wakapao and Akawini from the Pomeroon and they came up the Tapakuma creek to live,” Aubrey Fredericks, Toshao of Tapakuma said.

However, this village which sits in a forested enclosure some 14 miles from Anna Regina on the Essequibo Coast, Region Two, has not been untouched by the European influence.

Fredericks related, “At the bridge where we visited the first site, there was a Police station there and our fore-parents said that the Dutch had built that outpost and there were Dutch bottles there and that stuff.”

“So, that’s how it started in Tapakuma and time went on.”

In Tapakuma, worries are easily washed away, as one becomes captivated by what the small village has to offer. The clear sounds of chirping birds, cooing animals and rustling trees bring one as close to raw nature as they can get; but Tapakuma is looking to be much more than a peaceful hideout, hoping to venture into the tourism sector.

Accessible by road, through a trail from Anna Regina, boat from the Pomeroon or the backlands of Charity and Supenaam, the villagers at Tapakuma believe that there is much more that they can offer Guyana and the wider world.

Currently, Tapakuma thrives on subsistence farming, fishing, hunting and the resources of their forest to get by, but this is no fairy tale, since these resources are no longer enough to sustain the community of just under 500 residents.

Toshao Fredericks shared with the Sunday Times, “But of lately our wood species are being diminished very quickly and we don’t have the marketable species available anymore. So today, we are hoping to get into tourism, to develop that sector in our village, because we need, we need a new source of income, especially for the Village Council to manage our affairs in the village, to pay our expense.”

“We are also pursuing agriculture to develop that area also, but both sectors are posing challenges that we hope to get over them and reach our goal,” he went on to reveal.

“We are hoping that one day, Tapakuma would be able to benefit from that lake.”

The lake he spoke of is the majestic Tapakuma Lake which is owned by the village through the Amerindian Reservation (Land) Title, which is widely regarded as one of the largest in the Essequibo region. Located just a mile and a half from the village, the infamous Mainstay Lake is pale in comparison to the rich scenery and tranquillity that Tapakuma offers.

Interestingly though, the Tapakuma Lake stretches around its surrounding villages, making its way around to Mainstay; a collaborative effort from Mother Nature herself, the situation of Mainstay on the banks of one of Lake Tapakuma’s most beautiful look out points, pushes for a joint effort between the two communities to have the area developed into what can become a top tier tourist attraction.

“We are willing to have a meeting with the Mainstay Council and pursue the idea and see how we could negotiate and see how both villages could benefit,” a reserved Fredericks stated on the matter.

Quite frankly, the Toshao is willing to do whatever it takes to transform the village he presides over.

The trail leading to Tapakuma village

Another of Tapakuma’s potential tourist attractions is the remarkable piece of engineering that is the Dawa Pump Station. Built in 1961, on roughly 7 acres of land in the Tapakuma Lake, the Pump Station provides water for the Essequibo Coast.

Another gem that the village possesses is the Tapakuma Creek, which they have begun to develop. According to Fredericks, the Village Council combined Government grants to commence work on the creekside and establish the Lukanani Deck in 2019, however, this was stalled due to varying circumstances.

Nevertheless, Fredericks and his Village has a clear vision of what the Creek can become.

“We hope at some point in time we could hold activities right here at this area when it is completed. We could do canoeing, swim competitions, racing, we could do fishing also in the Lake and we could organise different things, getting tourism packages prepared. So, that when visitors come, we have everything ready from the time they enter into our village, we must know what we are going to sell to them.”

While their hopes and dreams are many, there are challenges that can hinder the community from becoming Guyana’s newest tourist destination.

On this topic, the Toshao shared, “Because the road is in a bad condition and that also need to be upgraded so people can visit our area and we could showcase our village.”

“We believe in our village that we have tourism potential, but we’re at a stage where we need much development and would like to seek help from our Government in doing so.”

With the Tourism Ministry and the Guyana Tourism Authority (GTA) finding the destination favourable, Tapakuma may soon receive the assistance it needs to commence its transition into a tourist destination.

“We want to explore the possibility of adding Tapakuma to our list of supported projects. As you know we support Indigenous communities in the development of sustainable tourism,” acting Director of the GTA, Kamrul Baksh said during a visit to the aforementioned sites.

He further stated, “That niche market has grown tremendously and the fact that Tapakuma is quite accessible to the city, it opens up the market for domestic tourism. Sports fishing, it’s largely for the international audience, but these new areas that we are exploring here as part of the broader Essequibo circuit will certainly be able to capitalise on that really trending opportunity”.

For now, Tapakuma remains one of Essequibo’s untouched gems but a formal expression of Interest to the Tourism Ministry, in good time, will open it up to all those who are brave and awe-inspired enough to travel that amazing trail.