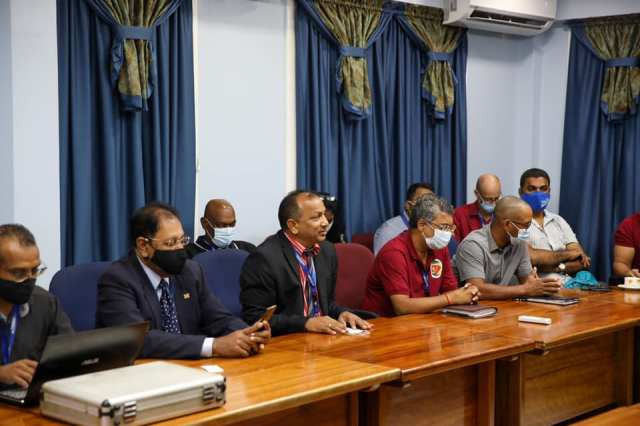 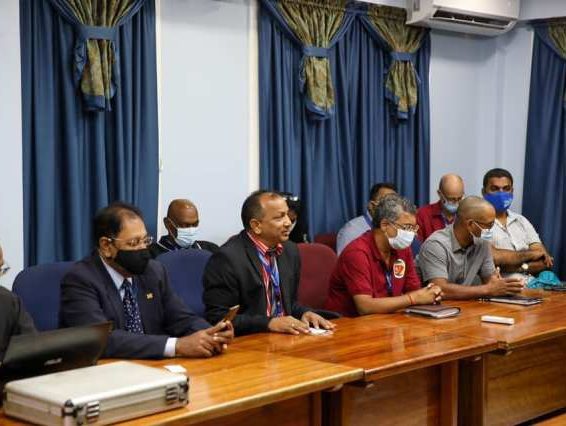 A private sector team from Suriname – representing small and medium-sized enterprises – is currently in Guyana to scope out investment opportunities here.

The delegation comprises 17 persons who operate in sectors such as retail, real estate, landscaping, waste management, and tourism.

In an invited comment, Minister Walrond explained that the meeting further cements the collaboration between Guyana and Suriname, not just at a governmental level, but through the private sector.

During the meeting, the two sides broadly discussed about the opportunities available in the country across all sectors including oil and gas and tourism.

On the topic of tourism, Minister Walrond explained that the two sides discussed how they can further collaborate to “twin” both countries’ tourism products. She made reference to the large influx of Europeans travelling to Suriname with KLM Royal Dutch Airlines, noting that the teams discussed how they get those visitors to come to Guyana.

Minister Walrond also explained that the Guyanese side underscored the importance of the Surinamese investment team partnering with local companies in the pursuit of their business ventures here.

Ministers of Natural Resources Vickram Bharrat, Tourism Oneidge Walrond, and Minister within the Ministry of Public Works Deodat Indar during the meeting

Formal diplomatic relations between Guyana and Suriname were established on November 25, 1975.

While the two countries have always enjoyed good relations, these ties have intensified in 2020 following the assumption of Dr Irfaan Ali as President of Guyana. Suriname’s President Chan Santokhi had visited the country for the Guyanese Head of State’s inauguration in August 2020. President Santokhi returned to Guyana in August 2021 for a four-day State visit where the two sides further discussed ways in which the countries can collaborate. The Guyanese President had also visited Suriname in November 2020.

During each of the visits, the Guyanese and Surinamese Presidents had met with members of the private sector and diplomatic community during which business and commerce opportunities, among other mutual areas of benefit, were discussed.

As newcomers in the oil and gas sector, the two countries are looking to tap into each other’s private sectors to peddle sustainable development and further strengthening bilateral ties. President Ali had noted that Guyana and Suriname must not compete but complement each other as they embark on this new development trajectory.

Moreover, a Memorandum of Understanding (MoU) was signed between the two countries to facilitate the joint bridging of the Corentyne River – a process which is in the making.

Since the engagements, a Suriname’s Optiek Ninon in August 2021 opened its first branch in Guyana.

During the opening ceremony, Guyana’s Finance Minister Dr Ashni Singh had explained that the geographical positioning of Suriname and Guyana has a plethora of possibilities for the expansion of markets and trade across borders, and he urged stakeholders from both countries to capitalise on these untapped opportunities.