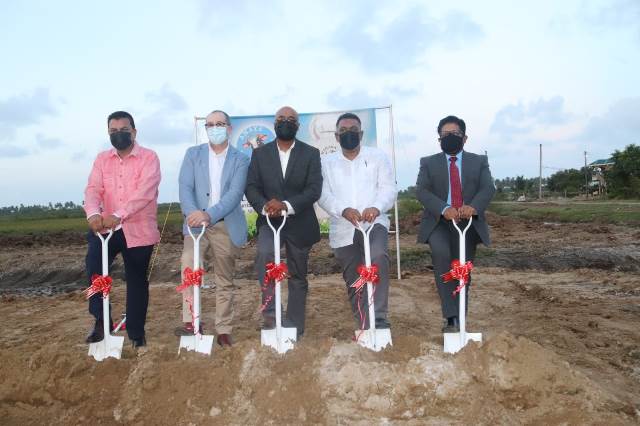 Several senior government officials on Friday joined the owner of the Amaya Milk Company for a sod-turning exercise to signify the commencement of the construction of a multi-million dollar state-of-the-art milk processing facility.

The facility, which is being constructed at Onverwagt, West Coast Berbice by Canadian-based investor Omkarr Sharma, saw an initial investment of $150 million.

In March of this year, a Memorandum of Understanding (MoU) was signed between the Amaya Milk Company, the Guyana Office for Investment (Go-Invest), and the Ministry of Agriculture for the construction of the facility.

While delivering remarks at the sod turning, Minister Mustapha said that the investment represents a remarkable opportunity for the transformation of Guyana’s traditional dairy industry.

Senior Minister within the Office of the President with responsibility for Finance, Dr. Ashni Singh in his address said the establishment of the milk plant demonstrates the kind of value-added opportunities that exist in Guyana.

“I’m particularly pleased to see Amaya proceeding with an investment that will clearly contribute to value-added processing. What we’re witnessing today is a demonstration of the kind of value-added opportunity that exists. This is an example of what can be done with a primary product; value-added processing to deliver a good world-class product to the Guyanese consumer and others living in Guyana and buying Guyanese products. This is, in fact, part of a broader wave of investments that we’re seeing and when I see a world-class product, whether it is bottled milk or bottled juices or some other spice or condiment packaged in a world-class package, ready for the international market place, it tells me that we are finally taking that critical step that we’ve long advocated,” Dr. Singh said.

The project is expected to be rolled out in two phases, the first phase focusing specifically on the production of pasteurized milk. Phase two, which is expected to commence within two years, will see the company producing other milk-based products such as yogurt and flavoured milk, specifically strawberry and chocolate, among other unique flavours.

Omkaar Sharma in his address credited the open invitation issued by His Excellency, President Dr. Mohamed Irfaan Ali to Guyanese from the diaspora to invest in the country and the work of the Guyana Office for Investment for easily facilitating the process that led to the sod-turning so soon after signing the MOU back in March of this year.

“We have all the conditions for a successful dairy sector. We have the land, we have the animals, we have the people, and we have the knowledge. When Dr. Ali was elected President and he invited the diaspora to come back and invest in Guyana, I knew that the time had come. His decision not to solely rely on oil and gas for Guyana’s growth was hartening and his focus on agriculture was music to my ears. When I saw the hard work put in by our Honourable Minister of Agriculture as he tirelessly works to promote agriculture in Guyana and the efforts of Dr. Ramsaroop to attract investment to Guyana and to make that process as easy as possible I knew that this government meant business and that this project would succeed,” Mr. Sharma said.

Initially, the plant will be able to produce 100 gallons per day. This amount could later increase to 800 gallons a day depending on the supply from farmers. At capacity, the facility is expected to make in excess of $75 million per month in direct payment to dairy farmers in Regions Five and Six.

It is expected that the construction will be completed making way for Amaya’s products to be on the shelves of local supermarkets by April 2022.

Earlier in the year when news of the MOU that was signed between Amaya Milk Company and the Government of Guyana for the construction of the milk plant broke, persons expressed their satisfaction with the return of the production of pasteurized milk in Guyana.

With the introduction of Amaya’s products to the local market, it is expected that Guyana’s milk import bill, which is currently estimated to be US$35 million per annum, will see a significant reduction. (Department of Public Information)