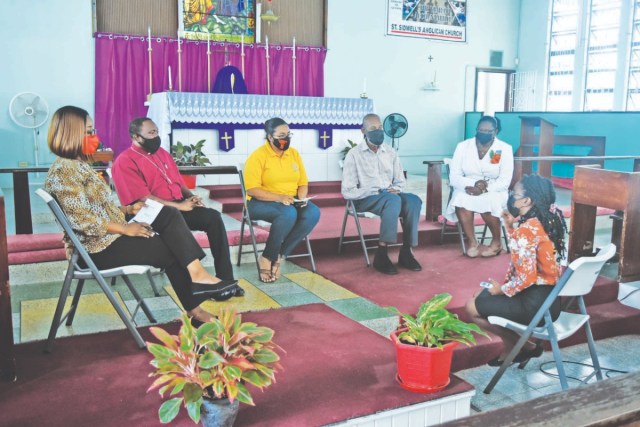 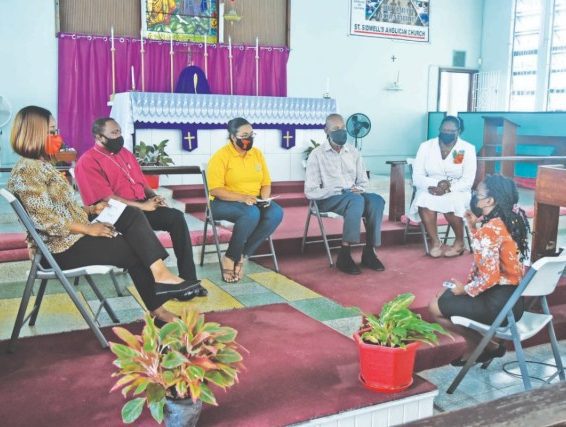 4 days ago·8 min read
ShareTweetPinShare
Home
Local News
“So many women are hurting” – Rev. Alves explains how the church plays an important role in ending GBV
The content originally appeared on: INews Guyana
Journalist Jemima Holmes interviewing Reverend Monsell Alves and others on Gender Based Violence

Gender Based Violence (GBV) has become too common an occurrence, especially in a society that one would describe as ‘modern’. Almost weekly, headlines are splashed with murder and convictions, stemming from this practice but on a much graver note, there is a large number of these occurrences that receive no publicity, unreported and unheard of by the public.

The devastating reality is, that GBV does not discriminate. It can rear its ugly head in the lives of individuals from all ethnicities, sizes, religious beliefs, social statues and gender.

And even more important to note, is that abuse can take on emotional, psychological and financial forms; much more than the physical and verbal methods we have been familiarised with.

It is for this reason, that awareness has become an integral action in dealing with GBV. For many, this awareness provides the perfect opportunity to share information, scenarios and stories from survivors.

“I personally believe we should have had a 356-day campaign because 16 days is insufficient to address the many issues that plague our societies,” Professional Social Worker, Akilah Doris reasoned.

The topic at hand was, of course, is “16 Days of Activism Against Gender-Based Violence”, which will commence today, November 25, on what is also the International Day for the Elimination of Violence against Women.

While 16 days may appear as adequate enough for events and awareness; Doris reasons that combatting the astronomical numbers of GBV in Guyana, would require an all- year effort.

Nonetheless, she gave insight into the significance of the observance, saying “It’s a period where countries worldwide, they come together and they advocate for the ending of violence against women and girls. It started in 1991, with the Global Women’s Leadership Institute, when they first advocated for a period where they needed to raise awareness on the issue of gender- based violence.”

The 16 Days of activism is primarily focused on instances of GBV towards women and girls, however, the scope of violence and abuse, when interpreted, can be widened to much more than what is typically considered to be abuse.

The “16 Days of Activism” ends on December 10, which is globally observed as International Human Rights Day. The link between these days, is simply not to use up it’s mandated 16 days, but to offer the inference that human rights are strongly liked to the need to eradicate GBV.

One faction of society that is mandated to be cognizant for signs of abuse, abusive relationships or situations, is the church. After all, it is regarded as a safe haven for many, who are dealing with whatever trials life may toss their way.

At the St Sidwell’s Anglican Church, 16 Days of Activism is of utmost importance, as the church seeks to play a positive role in awareness activities.

Like many other places, Parish Priest, Reverend Monsell Alves admitted that the church is likely to house victims of abuse, unbeknown to those who may sit, even in the same pew.

“In the church today, we have so many girls, so many females, who are hurting and they cover these scars, sometimes with their make-up. So, you don’t see the bruises, more-so, you don’t see the pain and what is quite interesting is that, sometimes the men who you see come to church look well attired, they have the most esteemed job in our society, those are the men who are very abusive,” Reverend Alves shared with this publication.

In continuing, he highlighted the importance for the church, in particular, to create an environment where persons feel safe enough to share or report their abuse.

“For us as the Anglican Church, in the Parish of St Sidwell’s, it is for us to recognize these issues.”

Additionally, with the first Day of Advent approaching themed “Hope”, Reverend Alves appreciates the coinciding observances, stating, “This GBV 16 Days of Activism, could not have fall at a better time, than when we are encouraging ourselves to give ourselves hope and to give those who are hopeless, hope.”

Abuse can happen to anyone

Cosigning on Reverend Alves’ belief that abuse can occur under anyone’s nose is another member of the St Sidwell’s Church Alison Barkie, who is also the Deputy Branch Leader of the Mothers’ Union.

Barkie, in sharing an analogy, detailed how difficult it may be for victims to share their stories, especially in a place like the church where perfection is expected from an oblivious few.

“Sometimes the church tries to hide things, because you’re not happy that in this place of worship, somebody can be abused, but it can happen and when we cover it up, it is not helping the individual, it is not helping our society. Worse yet, if a church leader is involved,” an empathetic Barkie highlighted.

She went on to immediately add, “You’re not going to hear anything about it, hardly but when it hits social media, of it’s a big story.”

As such, she made the bold call for gender-based violence on a whole to be taken as seriously as it is.

Barkie shared, “When we look at what is happening, even in our churches, members aren’t immune to Gender Based Violence. Women, girls, boys, even our men. Yes, we are looking at the elimination of violence against women, but the overall gender-based violence aspect really needs a lot of attention.”

Particularly at St Sidwell’s, Barkie revealed that on November 27, a Global Day of Action will be observed, where members will participate in three minutes of silence for those victims of GBV. Additionally, the church will also host a Prayer Group on December 3, with the eradication of GBV being the focal point of their prayer.

Stand up, speak up and act

Prayer is the common thread between the Mothers’ Union and the church, as the former will take a prayerful approach to this year’s 16 Days of Activism. This is according to the Mothers’ Union Diocesan Social Policy Officer, Dawn English.

“We intend to stand up, speak up and act,” English said firmly.

She further stated, “There are too many people who are not very clear on what abuse is or what violence is, so they think they’re not victims. They need to be aware so they can stand up for what is right.”

On the Mothers’ Union list of activities, is a meeting today (November 25) where their members will sport purple scarves. However, in an act of symbolism of the 1 in three women who suffer abuse in the world, every third woman’s scarf will be worn as a gag around their mouths.

On December 2, the Mothers’ Union will host a church service, the feature presentation of which is expected to encompass GBV and on December 9, they will explore the Biblical perspective of the family, and its importance in combatting GBV.

While the knowledge prevails that GBV is an ongoing act of terror in many homes, the biggest issue in stamping it out, is not only to help victims understand that they are indeed a victim, but to also find ways for these victims to open up about their experiences.

One way that St Sidwell’s is hoping to foster an environment of comfort, is through their newly formed Women’s Ministries programme.

“We are encouraging all women, those especially who are not attached to our Mother’s Union, to be a part of everything that is happening in the church and we will also be encouraging them to meet in smaller groups,” Barkie revealed.

In disclosing their reason for focusing on smaller groups, Barkie commented that such an environment is more likely to result in women sharing their difficult experiences.

“Sometimes we want to say something to someone about whatever is affecting us, but we don’t really get the urge to do it because we are so many,” Barkie explained.

She continued, “We are hoping that when we meet, whether it is here in person, or in our Zoom chat, because it wouldn’t be 70 women at one time; we know from experience and studies that smaller groups tend to produce a little more, and people are a lot more open when you’re asked to share with 10-15 persons, compared to 70 women sitting together.”

Akilah Doris was very receptive of this initiative, commenting on the importance of the church being an advocate against GBV.

“It’s refreshing to know that the church has taken a proactive approach towards joining forces in addressing this very issue that we face,” Doris remarked.

On making the church a safer space, the Professional Social Worker commented, “There are persons who are broken, who need help, who acknowledge that they need help, but they would never come to us because of all of these rules and laws and stuff that are in place. Somebody said, we are in no position to judge others and I thank the good Lord that he is the ultimate judge, because if we were to look at our own lives, I don’t think we would have any more time to look at anybody else’s own.”

As such, the group encouraged the use the colour Orange, since it is the global shade attached to the 16 Days of Activism initiative.

“It is a signal or an indication, that we are a part of the cause, towards ending Gender Based violence,” Doris informed.

She also took the opportunity to highlight that while the focus will be on women and girls, men also suffer silently.

Touching on the societal notion that ‘men shouldn’t cry’, Doris urged, “We need to move away from these traditional norms.”

“During this period, it is also good to raise the awareness as it relates to our men, because you see, we have not socialized our men to express, to be expressive or to say what is bothering them, or to even show emotion,” she went on to state.

Aside from the church, civil society is expected to show out ‘in their numbers’ over the next 16 Days, to display their solidarity against GBV. Intrinsically, the notion is heartwarming but as cases of gender-based violence, especially in Guyana, continue to rise as they years go by, there needs to be much more talk.

Like at St Sidwell’s, action needs to take the front seat in dealing with GBV.