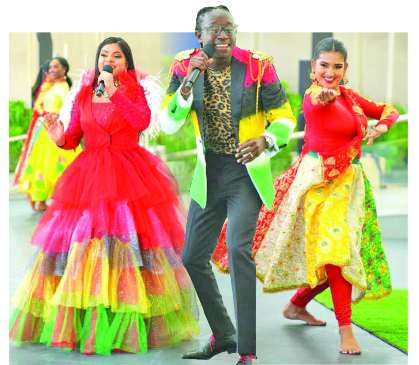 Showcasing Guyana to the world: Randy Madray designs a show-stopper in Dubai

While many lauded the performances by various Guyanese artistes at the recently held National Day Celebrations at the Dubai Expo 2020, eyes were riveted on the performers’ colourful costumes created by Guyanese fashion designer Randy Madray.

Showcasing the colours of the Golden Arrowhead and Guyana’s rich cultural heritage, the Randy Madray designs were a show-stopper.

The designer expressed his gratitude for the “outpouring of love and support” he received from various individuals, both locally and internationally. He also thanked the Ministry of Culture, Youth and Sport for affording him the opportunity to showcase Guyana through his designs on such a prestigious stage in Dubai.”We made stunning jackets for Samuel. Many messaged us saying he looked like a ‘Guyanese royalty’. We designed for talented singers Gavin Mendonca, Poonam Singh, Tennicia De Freitas and Daniela Araujo. It was such an exciting experience working for these local artistes and dancers on this project.”

Madray pointed out the indigenous costume worn by one of the dancers was accessorised with a mix of contemporary materials, like wooden beads, and enhanced with rhinestones. His creations also included necklaces, bracelets, and even chest plates.In an interview with Sunday Times, the 28-year-old designer, who has received several awards and accolades over the years for his intricate and glamorous designs, spoke about the inspiration behind his designs showcased in Dubai.

“My inspiration for the designs worn by Guyanese singers and dancers in Dubai was to simply showcase the richness of our Guyanese culture. I was fortunate to have a briefing from a very dynamic team, which was in charge of the performances, on what they desired the costumes to portray. I diverted a little bit and added my Randy Madray touch and brought everything together. I’m very proud of the end product,” stated the designer.

Madray mentioned that he and his team designed not only for the Guyanese singers, but also for every Guyanese dancer at the Dubai Expo 2020. He noted that designing dance costumes was a “rare” decision, as his fashion house usually does not do such designs. However, it was a challenge he was willing to take on.

Incorporating “exciting and very fashion-forward ideas” which are representative of the Randy Madray brand, the designer aimed to “showcase the depth and beauty of our Guyanese culture”.

“Each design was tailored to the personality of every dancer and custom concept. Each piece took a different amount of hours to produce. For example, singer Poonam Singh’s piece took days because of the 15,000 rhinestones manually placed on her costume. There were also very intricate details on every piece,” Madray explained.

According to the debonair fashion designer, a total of 11 persons wore his designs in Dubai. He recalled receiving several messages praising the jackets he designed for Guyanese singer Samuel Medas.

He also praised his “amazing” team for their dedication and creativity.

“I have such an amazing, dynamic and creative team which made the production process successful in two weeks. Some days we worked 16 to 20 hours. Doing this is a testimony of our dedication and love for our country Guyana.”

“I think this is a story that should inspire youths who want to get into the fashion industry, or into the arts, or other industries that are not fully developed in Guyana. I want them to know there are many opportunities, but they need to grab them and fight to fulfill their dreams without hesitation,” Madray encouraged.

So, what’s next for the fashion designer? Currently, Madray is preparing as a contestant for Mr India Guyana 2021. Check out his Facebook page, Randy Madray Official.