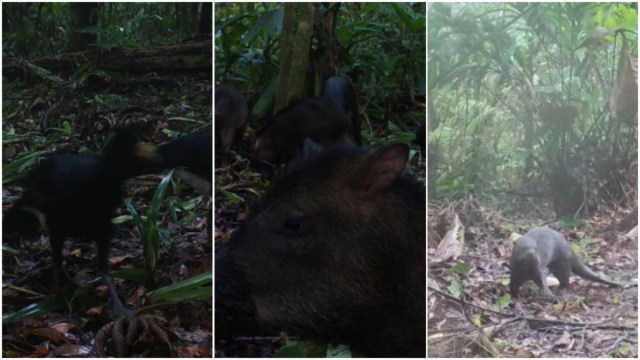 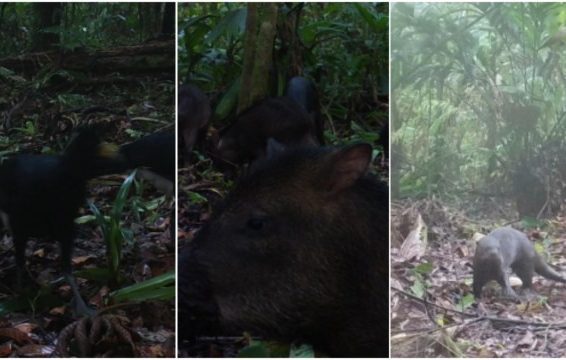 Several animals which are on the International Union for Conservation of Nature’s (IUCN) Red List were earlier this year found along the Barima-Mora Passage (BMP) in Region One (Barima-Waini).

The IUCN Red List of Threatened Species(TM) is the world’s most comprehensive inventory of the global conservation status of plant and animal species. It uses a set of quantitative criteria to evaluate the extinction risk of thousands of species.

Additionally, two birds on the IUNC Red list were also recorded. The Grey-winged trumpeter is listed as “Near Threatened” while the black curassow is a “Vulnerable” species.

The discovery of these animals was made during two different studies conducted by teams from the Guyana Marine Conservation Society (GMCS).

The first project was done in February 2021 as part of the Barima-Mora Mammals Survey (BMPMS). It was a four-month-long camera trapping project which ended in May 2021.

The camera trapping project entailed a total of 30 camera traps being placed and systematically spaced throughout the region of study the area in the BMP.

At the end of the four-month period, the Project Coordinator Felecia Collins and the GMCS team returned to the BMP to retrieve the cameras.

A preliminary assessment of the camera trap photos done by Collins led to the discovery of six IUCN red listed mammals.

“Based on the preliminary species list, the camera traps set in the Barima-Mora Passage recorded six mammals which are currently on the IUCN Red list. The giant anteater, jaguar, and margay are near threatened species while the white lipped peccary is listed as vulnerable and the giant river otter is listed as an endangered species. Additionally, two birds on the IUCN Red list were also recorded. The Grey-winged trumpeter is listed as near threatened while the black curassow is a vulnerable species,” a report on the study outlined.

Meanwhile, the other study was conducted from September 6 to the 11 in the BMP and led to the discovery of the Megalops atlanticus (Cuffum) which is an ICUN Red Listed Species.
“The fish survey was a crucial requirement for the proposed BMPSPA (Barima Mora-Passage Special Protected Areas) since it provided baseline data on the current fish community composition in the area and their conservation status,” the report on the study documented.

“Overall, we recorded a total of 329 individuals from 32 species of fishes of which 51% are consumed by locals. We also recorded one vulnerable species, Megalops atlanticus (Cuffum) on the IUCN Red List of Threatened Species, indicating that this species has a high risk of extinction and it needs urgent protection,” Project Coordinator Mark Ram explained to INews.

“Our findings showed that the area supports many commercial species and vulnerable species, making it important for the livelihood of the local indigenous communities. It also emphasises the need for legal protection of this area to preserve the existing mangroves, biodiversity, and ecosystem services while maintaining the livelihood of locals,” he added.

Last month, GMCS conducted a birding study in the area where two new species of bird were recorded for the first time in Guyana.

GMCS President Annette Arjoon-Martins explained that these studies were never conducted in this part of the region before.

“The birding study, the camera trapping study, the fishery studies, these are pioneering initiatives that have never been done in Region One in this area before,” she remarked.
Arjoon-Martins noted too that locals from the region were also included in these studies.