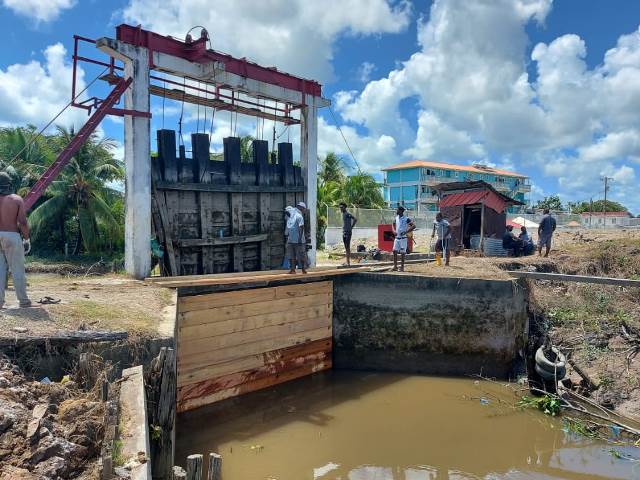 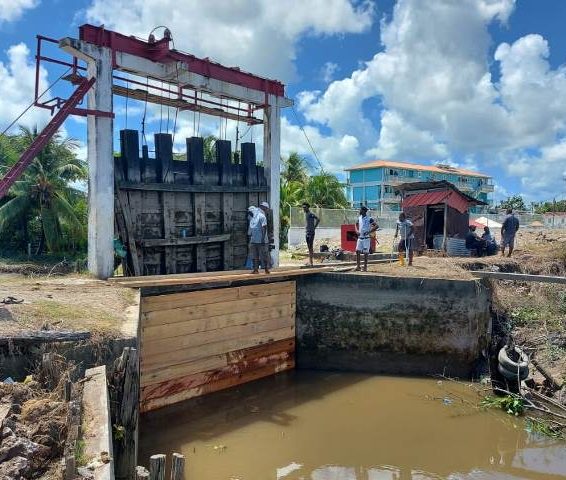 The Ministry of Agriculture reported that at approximately 2:00h on Thursday, the sluice door at Providence, East Bank Demerara, developed a breach resulting in flooding in some parts of the area.

Over 200 households in Providence and Peters Hall were said to be affected by flooding, with the lower flats of these houses being inundated with seawater.

Subject Minister Zulfikar Mustapha and other senior officials and engineers attached to the National Drainage and Irrigation Authority (NDIA) subsequently visited the area where an assessment was done.

The collapsed koker at Providence

The Minister explained that the door collapsed as a result of the tide and that engineers from the NDIA were on site working to address the situation and bring relief to those affected.

“At around, 2:00 am this morning, the koker door at Providence collapsed resulting in our officers immediately mobilizing resources to seal the breach. A contractor was also engaged and installed stop logs until a new stainless-steel door is fabricated and installed to replace the damaged wooden door. A pump will also be on site until the new door is installed. Additionally, the stop logs will be operated during the low tide to facilitate gravity drainage to compliment the pump,” Mustapha explained.

Minister Mustapha further explained that the local Regional Democratic Council is responsible for maintaining the structure, adding that it appeared this was not being done regularly.

“The operation and maintenance of this structure fall under the RDC. From my observation, the structure was not maintained as it should be. I will now have to sit with the NDIA and the other authorities to determine a way forward. We cannot continue like this so the NDIA may have to assist with operating and maintaining this structure as well. We cannot have the lives and wellbeing of our citizens threatened because those in charge are neglecting their responsibilities,” he added