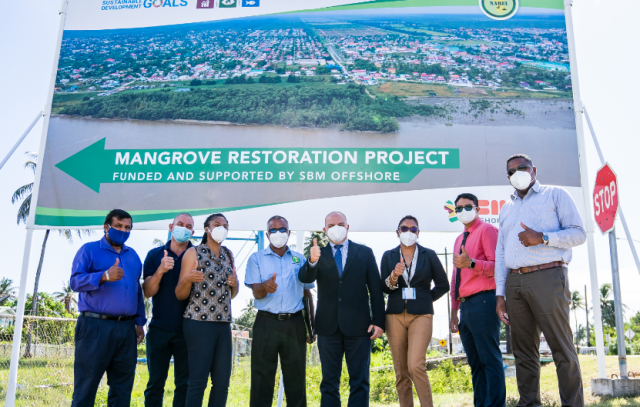 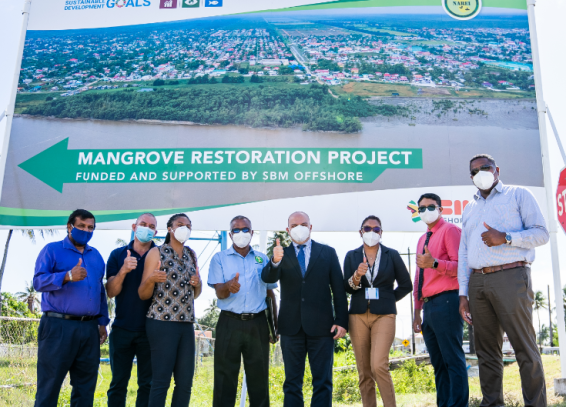 The project launch and stakeholders’ engagement was hosted at Tipperary Hall, Buxton, East Coast Demerara. This followed the unveiling of the project’s billboard at Annandale.

The project involves the construction of a 400-metre geotextile tube groyne field, and the propagation and planting of 20,000 mangrove seedlings. It will offer coastal protection from the sea and feature community participation. The project will also be internationally certified.

SBM Offshore’s General Manager of Guyana, Mr. Francesco Prazzo in his remarks said that the company embraces a sustainable business model that creates shared value, serving at the same time the best interests of the society, the environment and its clients and shareholders.

“This ethical behaviour is what, for me, makes good corporate citizenship and, put simply, goes hand in hand with good business. Institutions, then, play a crucial enabling role for the success of all of us, as they have powerful effects to define opportunities and shape behaviours. That, in turn, affects what investments are promoted and what activities are encouraged.”

Mr. Prazzo explained SBM Offshore’s commitment to the project, stating that mangroves are a gift for the environment and their restoration offers the greatest protection in terms of coastal endurance and will improve the lives of thousands of Guyanese who live along the coast.

NAREI’s Chief Executive Officer, Mr. Jagnarine Singh, who applauded SBM Offshore for its participation in the project, said that the Government of Guyana recognises the importance of the mangrove ecosystem to flood prevention.

He said, “The conservation and restoration of this unique and valuable eco-system will increase the resilience of coastal communities to floods due to rising sea levels, while providing a habitat and nursery for birds and fishes.”

Mr. Jagnarine added that, “The partnership between NAREI and SBM Offshore to restore over one kilometre of mangrove along the foreshore of Annandale, Buxton and Friendship will not only increase the flood protection of the communities, but will also provide valuable opportunities for the community members.”

United Nations Food and Agriculture Organisation (FAO) Representative in Guyana, Dr. Gillian Smith, while commending the collaborative effort of SBM Offshore and NAREI, noted the importance of leveraging public/private partnerships to projects of this nature. She said, “We really appreciate and congratulate you for this good initiative; it is coming at a good time. It has the potential to catalyse the transformation of livelihoods for thousands of persons in these communities. Their involvement at every level of the project will enhance the project.”

Major General (ret’d) Joe Singh in his remarks encouraged the community representatives to use the project as an opportunity to develop community enhancement and livelihood projects that would complement the mangrove restoration intervention. He noted that the project will provide an opportunity for residents to develop tourism, apiculture and other livelihood projects once the mangrove ecosystem is restored.

Project Coordinator of NAREI’s Mangrove Department, Kene Moseley provided an overview of the project and emphasised the importance of community involvement in order to achieve success. Representatives of the Neighbourhood Democratic Councils, Community Development Council and other representatives of the communities were in attendance.

Mangroves provide protection for people, houses and farmlands from natural disasters such as storms, floods and tidal waves. The trunks and branches act as a barrier helping to reduce the impact of the waves and flooding.