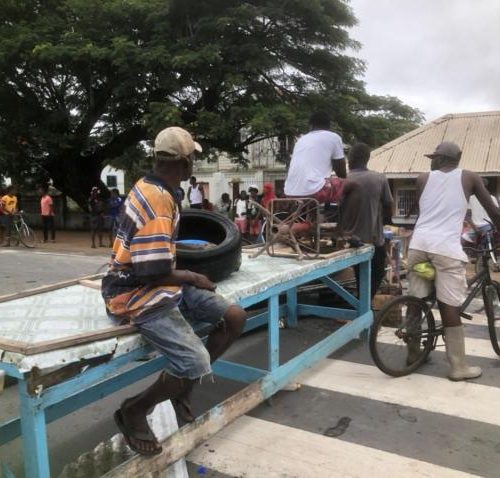 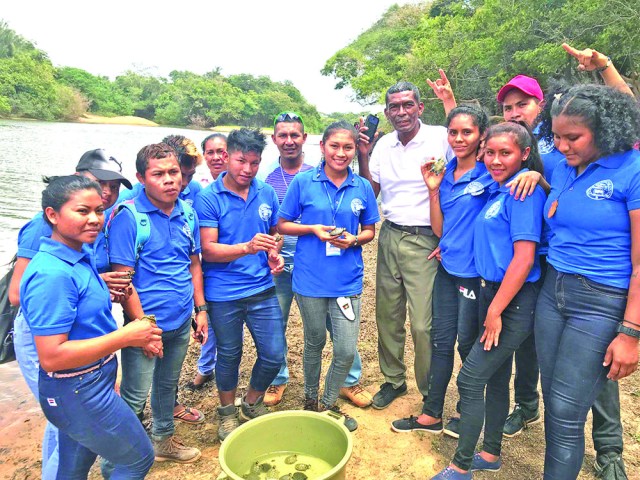 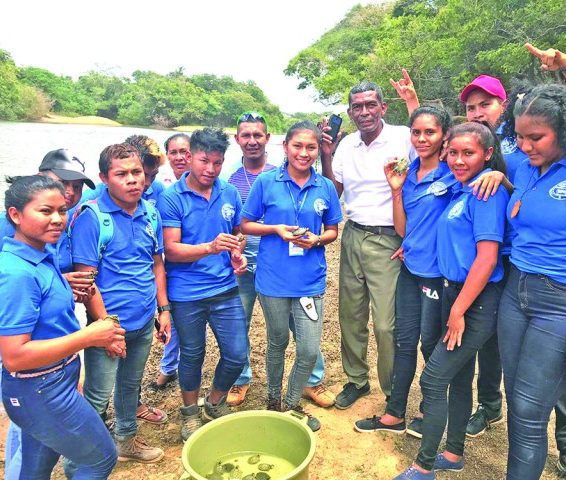 Saving the turtles at Yupukari

2 months ago·3 min read
ShareTweetPinShare
Home
Local News
Saving the turtles at Yupukari
The content originally appeared on: INews Guyana
Students of the Bina Hill Institute preparing to release turtles into the river during the festival in 2019

On May 14, 2022, residents of the Central Rupununi village of Yupukari will witness the annual release of baby turtles in the waterway there. It is a spectacle and a months-long process that culminates in one day; the event is called the Annual Turtle Festival.

Releasing the baby turtlesOn the day of the festival, the organisers present their reports of the conservation activities and on the day of the event, visitors can visit the various booths set up to educate people on the turtle population, conservation issues, and history of the festival among other vital pieces of information.The activities attract tourists, visitors from other communities, conservationists, and officials of the Government, given its deep resonance with saving a mammal population that takes decades to replenish.

In many Indigenous communities, eggs and meat from turtles are considered a delicacy given its high nutritious content. But over the years the number of turtles caught may outweigh those still roaming the landscape and as such, the annual festival highlights the need for the remaining number of animals to be conserved. The Sustainable and Wildlife Management programme is in collaboration with Caiman House, the non-profit entity which is based at the heart of Yupukari village.

Samantha James, an environmentalist in community conservation and resource management for over 20 years in the North Rupununi, told Guyana Times recently that the idea for the festival came from the wildlife festival. James, whose focus has been on wildlife clubs and environmental education, and conservation leadership, noted that it is based on the concept of having young people involved in conservation activities.

The yellow-spotted turtles at Yupukari, after they were released into the environment

James said that turtles are a traditional source of food for the Indigenous populations of Guyana and according to her, turtle harvesting in the Rupununi is usually done during the dry season. “Turtle meat has an incredible amount of fat,” she explained, noting that the giant river turtle, one of the species found in the area, can weigh as much as 100 pounds. She said it lays as much as 200 eggs.

The smaller yellow-spotted turtle, another species found in the area, is also rich in food content and can lay between 30 to 40 eggs. “So, the problem now is that turtles have a slow growth rate and if we over harvest, what will one be left with?” she said.

So what exactly happens at the festival? The first-time visitor will witness a parade in the morning hours of the festival and this will be followed by the opening ceremony at 9:00h.

After the opening ceremony, the festivities kick off and visitors can visit booths that will be set up and which will give an interactive learning experience about the turtle project, caimans, tourism, wildlife clubs; there will even be a library booth and partners of Caiman House. Those entities, which include the North Rupununi District Development Board and the South Rupununi Conservation Society, will have their own booths at the festival.

Saving the turtlesAfter lunch, a few activities, which include public speaking exercises, quizzes, and educational outdoor games will lead to the highlight of the day – the releasing of the baby turtles. This will occur at around 16:00h and according to the organisers, this late evening release will allow the turtles the best opportunity to avoid predators. An exciting campfire with accompanying social items will bring the curtains down on the festival.

The yellow-spotted turtles at Yupukari, after they were released into the environment

James said Caiman House and the village of Yupukari collaborate on the conservation programme in which persons would retrieve the eggs from the mother turtles which are laid on the sand banks of the nearby river. She said they are taken safely to the village where they are placed in a hatchery – a structure similar to a swimming pool filled with sand. When the eggs are hatched, the baby turtles are then placed in sacks of water for a year. On the day of the festival, the small reptiles are then released into the water.

She said each turtle is tagged and when released. The reptiles acclimatise with the natural environment. James explained that since the turtles are a source of food for residents, Caiman House does not stop persons from catching the mammals in the area but persons are asked to report when a tagged turtle is seen.

A similar project is being undertaken at Sand Creek by the village in collaboration with the South Rupununi Conservation Society. At Sand Creek, residents do not collect the eggs from the turtles which are found at 6 protected ‘beaches’ found along the nearby Rupununi River.

James said the Sustainable Wildlife Management body is providing support to a turtle conservation project at Rewa which is home to much bigger species of turtles. As a long-term move, the conservation bodies are working with the agencies to share various methods to save not only turtles but other animal populations in the area.