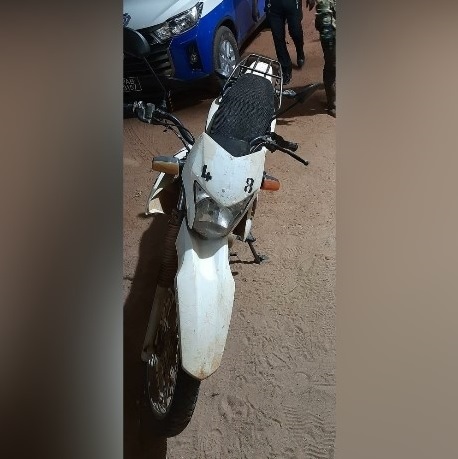 Police have arrested a Rupununi, Region Nine, man who robbed a teacher of his motorcycle after receiving a free drop.

The incident occurred sometime around 17:45 hours on Friday at St. Ignatius Village, Central Rupununi. The motorcycle in question is a white and black XR150 motorcycle, #CH 4728, valued at $250,000.

Investigations revealed that about 17:00hrs on Friday, the 36-year-old male teacher was proceeding north on Parikwarunau Village Access Road heading home when he was flagged down by the alleged suspect, who is unknown to him.

The alleged suspect then asked the victim for a lift to St. Ignatius Village and he obliged.

But when they reached St. Ignatius Access Road, the suspect asked the victim to stop for him to urinate. However, upon stopping, the suspect placed a knife to the victim’s neck and ordered him to get off of the motorcycle.

After the teacher complied, the suspect rode away in an eastern direction with the victim’s motorcycle.

The area was combed for the alleged suspect and he was contacted about 21:00hrs in his neighbour’s yard.

He was told of the allegation and cautioned, under which he replied “Sir dah man pull a knife on me so I tek away he bike and hide it.”

He subsequently took the police to a bushy area in Kumu Village and the motorcycle was found in some bushes.

The 30-year-old suspect is in custody pending further investigation.