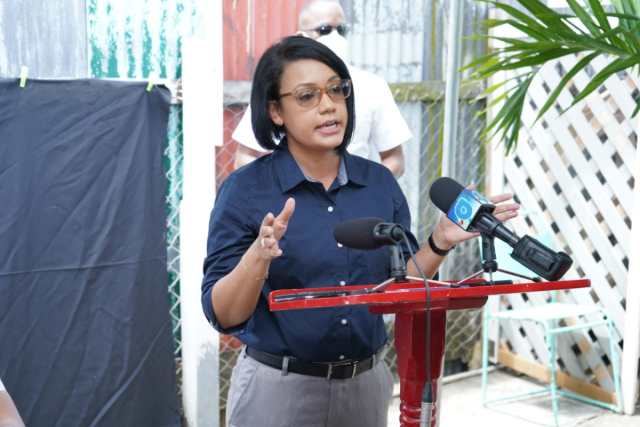 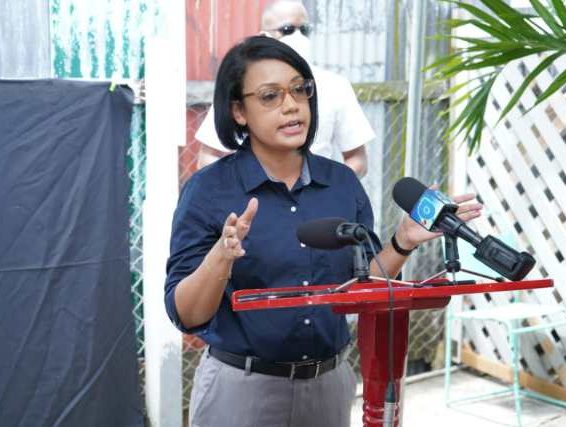 Minister within the Ministry of Housing and Water Susan Rodrigues

Minister within the Ministry of Housing and Water, Susan Rodrigues, has committed to a range of relief measures for Berbicians during her one-day outreach to Region Six (East Berbice-Corentyne).

The Minister began her first series of meetings at Fort Ordinance, where she highlighted works being undertaken by the Central Housing and Planning Authority (CH&PA) and the Guyana Water Incorporated (GWI).

In her address to the gathering, the Minister urged residents to utilise the forum to raise their concerns, which she committed to resolving in a timely manner.

“We have been trying as far and as much as possible to give every region the type of attention they need…we have started putting together budget 2022, this is an opportunity to identify the needs of the community.”

Referring to these types of engagements as the hallmark of the Government, Minister Rodrigues told residents that every region will benefit from a cabinet outreach that will see all sector ministers.

After listening to a slew of complains raised by residents, including the need for street lights, road rehabilitation works and the long wait house lot allocation the Minister assured that her Ministry will work assiduously to have these issues addressed.

In response to poor street lighting, she has committed to the donation of ten street lights in Fort Ordinance, which will help to enhance security in vulnerable areas.

Further, she underscored that the Ministry is currently undertaking infrastructure development works in the region and the Ministry’s plan to address the backlog of 7,000 applications for house lots in Region Six.

The completion of these works will allow allottees, who are eagerly waiting, to finally access their land.

Misconduct in public office: PI into charges against Roxanne Myers to proceed

In the water sector the Minister announced plans for a third water treatment plant for the Corentyne Coast which will ensure one hundred per cent coverage for treated water in communities across the Corentyne.

Regional Chairman, Mr. David Armogan, lauded the Minister and her team for the initiative, as he said it allowed for direct consultations with residents.

“The very energetic Minister has been moving around the country and this is her way of getting a first-hand view of the housing and water situation given the fact that the provision of housing schemes in every area in a priority for her,” the Regional Chairman said.

Similar engagements were also held at Chesney Village, Babu John and Ankerville, where residents were also able to have their concerns addressed.