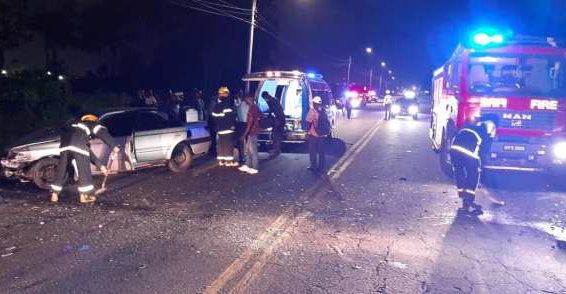 The scene of an accident on Homestretch Avenue which occurred on April 14, 2021 [NCN photo]By: La’Wanda McAllister

“Distasteful” was the word used by Assistant Superintendent Ray Marcurius to describe the act of robbing persons who have been involved in road accidents.

It is a situation that has become very common in Guyana. According to Guyana Police Force’s (GPF) Public Relations Officer Stan Gouveia, passersby would often pretend to be helping accident victims when, in fact, they are actually robbing them of their valuables.

Items such as cellphones, wallets, money, and jewellery are often stolen from victims at accident scenes. In some cases, vehicle parts are also looted before help is even sought.

Marcurius, who is the Officer-in-Charge of the Crime Laboratory, strongly condemned these actions. He was at the time being interviewed by Gouveia during this week’s ‘Police and You’ radio programme.

He said the situation is “upsetting to watch”.

“We need the public support to stamp out and eradicate these kinds of behaviours. There are responsible persons who are there and who need to take charge of certain things until the police get there. The Police is not going to be everywhere all the time…,” he highlighted.

During the programme, it was also outlined that accident victims may stand a better chance of surviving if the first responders help, rather than rob them.

No electoral advantage from changes to election laws – AG

“You see people in a position and you have an opportunity to help and you use that opportunity for personal greed…We need more programmes to educate people to move away from these kinds of behaviours…people need to speak out more as well,” Marcurius posited.

Only recently, a video was circulating on social media which showed that a peacemaker trying to part a fight between two persons used the opportunity to push his hands in one of the individual’s pockets and removed some valuables.

It is still unclear if that man was arrested for this act.