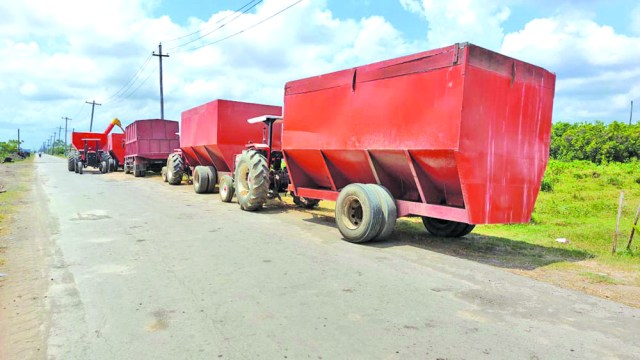 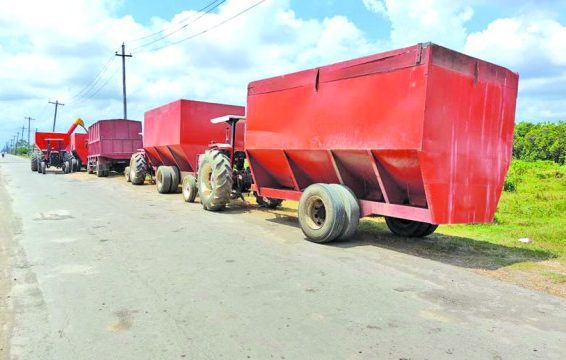 2 months ago·3 min read
ShareTweetPinShare
Home
Local News
Rice farmers in dire need of water as they get ready to replant with 4 non-functional pumps at Black Bush Polder
The content originally appeared on: INews Guyana
Paddy trucks in Berbice

Seventy-five per cent of harvesting in the Black Bush Polder (BBP) has been completed and some farmers have already started to prepare lands for the next crop. However, the replanting of rice has been challenging as several pumps which supply water to farmers are not operating.

“The next crop is due to start somewhere around October 24, so whilst we are finishing off the other 25 per cent harvesting of this present crop, we are now moving apace to start the other crop,” Region Six (East Berbice-Corentyne) Chairman, David Armogan said.

However, three pumps at the Mibicuri Pump Station are not working.

The Chairman, who was at the time addressing the Regional Democratic Council (RDC) on Thursday, was expected to officially inform Agriculture Minister Zulfikar Mustapha about the situation.

To add to the water woes, the pump at Manarabisi is also out of order.

“That has not been working for a long time now. For the entire crop, that pump has been out of order because of a radiator problem. I am hoping that some of these little things would be sorted out so that we don’t have any hiccups for the start of the new crop. As you would notice, the weather is a bit friendlier and so once we start the crop around the 24th, it means that we will have to pump irrigation water for a while because all of the farmers will need irrigation water,” the Chairman noted.

He said he is seeking the help of the Agriculture Minister to ensure pumps are up and running in time for the next crop.

“Right now we are in the process of doing dams,” Armogan told the RDC while adding that most of the dams have already been repaired.

“The Ministry of Agriculture did give us a substantial amount of money to repair dams and so quite a number of all the dams that were slated to be repaired have already been repaired. There are still a few dams left and we are working to get those done. The entire sum has been expended so whatever work has to be done now, has to be done with machines that we have in our system,” Armogan added.

Meanwhile, the BBP which cultivated BBP 14,161 acres still has another 3500 acres to harvest. The yield is 38 bags per acre.

For the front lands which include the 52/74 Neighbourhood Democratic Council (NDC) Maida/Tarlogie NDC, Good Hope/Number 51 NDC and Macedonia/Joppa NDC, where 26,246 acres are under rice cultivation, 44 per cent have already been harvested. The farmers there are getting an average of 35 bags per acre.

While the yield is a somewhat low, it cannot be considered bad when compared with some previous crops when the yield was stuck at 26 bags per acre.

The price being paid by millers in the Region is between $65,000 – $66,000 per tonne which is the same as what was being offered to farmers during the last crop.During the crop, there has been a moderate infestation of paddy bugs in some communities.

Meanwhile, cash crop farmers in both the front lands and the BBP are calling for the water levels in the canals to rise.

The water at the Adventure Canal has decreased considerably, resulting in salt sea water seeping in and making it difficult for vegetable farmers to get fresh water for their crops. Meanwhile, all rice farmers have since collected their flood relief cash grants. However, some 50 livestock farmers are still to uplift their cheques from the Guyana Livestock Development Authority (GLDA).

According to Armogan, these persons cannot be found. He said most of them have no phone numbers listed. The administration, he added, will compose a list of those names, so that when persons contact the regional administration enquiring about their flood relief cheques, they will be able to check the list of outstanding payments and advise the persons accordingly.

Meanwhile, the National Agricultural Research and Extension Institute (NAREI) has completed its distribution of flood relief cheques to rice farmers.

He pointed out that the Agriculture Ministry is working very closely with all farmers, be it rice, cash crop or livestock so that they can produce as much as possible.

“As you know, the prices of vegetables have increased in the market and so we are trying to ensure that all our vegetable farmers get going again so that we can reduce the price and get it back to some normalcy in the marketplace.”