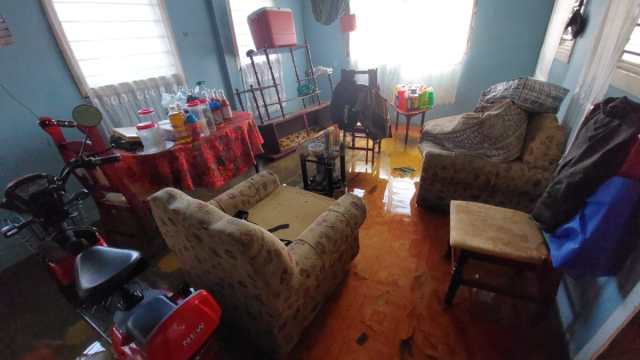 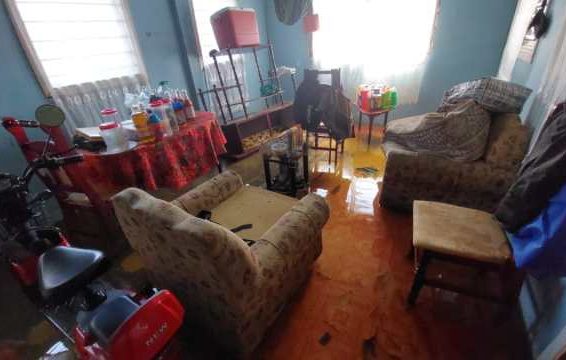 Villages in both Region Five (Mahaica-Berbice) and Region Six (East Berbice-Corentyne) were up to Friday evening under water as a result of heavy rainfall over the past two days.

In Region Five, scores of persons at Ithaca were forced to paddle through several inches of water to get into and out of their yards while others had to relocate as flood waters washed through their homes.

The flood is as a result of a koker, which was not fixed on time. A contractor was awarded the contract to fix the koker but was unable to do so because of the high tide.

A chicken pen flooded in Region 5

A number of households are affected also livestock, cash crops and other crops have been affected at Ithaca.

Following the rise of water on the land which entered several homes, the Regional Administration visited the area on Friday afternoon and engaged those affected.

Region Five Chairman Vickchand Ramphal, who also visited the affected community, has since made arrangements to have systems put in place to assist those who have been affected.

The Chairman further told this publication that Prime Minister Mark Philips has since been contacted and has pledged his support by sending some cleaning agents for those that are affected.

Meanwhile, water levels in both the Canje and Berbice Rivers have been rising as a result of continuous rainfall in Regions Six and 10 (Upper Demerara-Upper Berbice).

Sections of East Canje remained under water on Friday night after continuous rainfall on Thursday and Friday morning.

Some residences say it is the second flood to have hit them within a very short period.

Some persons could not go to work on Friday as several inches of water remained in their homes; others were just waiting hoping that the water would subside.

Both crops and livestock have been affected there as well.

Some residents claim that their furniture and other household items are damaged since it is not the first time that floodwaters have been in their homes in recent days.

A Region Six woman in her flooded kitchen

Jalisa Joseph told this publication, “The first time we had to throw away a chair. The freezer is on empty drink cases since the first time last year. The people come around and my mother gave them her name and they say they will look into it and nobody came back.”

Joseph said they have to dump a gas stove which was damaged as a result of that flood.

“The wall divider when we come out this morning we see it brake. Look how high the water is… those chairs in there we will have to throw away again. I could not go to work because the bathroom and toilet under water so I could not bathe,” the woman disclosed.

Another resident Mahadeo Indar explained that the community is low and has water coming in from other communities when there is heavy rainfall.

“The water from Bun Bush end coming down here. Bunn Bush don’t have any drainage right now, the drainage it totally shut down. We report it to the Council and nothing happening,” he said.

Desmond Balgobin who showed this publication his kitchen garden under water said livestock has also been affected for him.

“Four days now and the water haven’t drained off as yet. This is the second flood. The first one was last week.”

Some residents say the flood is as a result of poor dream drainage, blaming work done by a contractor and a clogged drain which the Neighbourhood Democratic Council has not serviced for years.

“Since the hymac dig to make the street, they block the culvert mouth and I went in and told the Overseer during the dry weather and up to know they have not come and cleaned it and this is two floods come and hit us so the water taking very long to drain out,” he said.

According to Indar, a contractor was engaged in rehabilitant Bun Bush Dam and had set the foundation for the street during when there was a huge flood last year which hit all ten regions.

He explained that the sand which was in place to construct the road was all washed into the drain causing it to be blocked.

“They didn’t dig it back so now when the rains fall everything running back this way.”

Regional Executive Officer, Navindra Persaud, told this publication that residents in some of the affected areas have been contacted and assistance should be provided to them though the CDC.