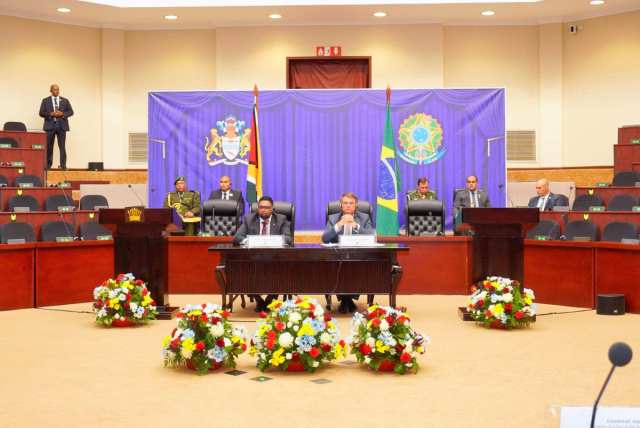 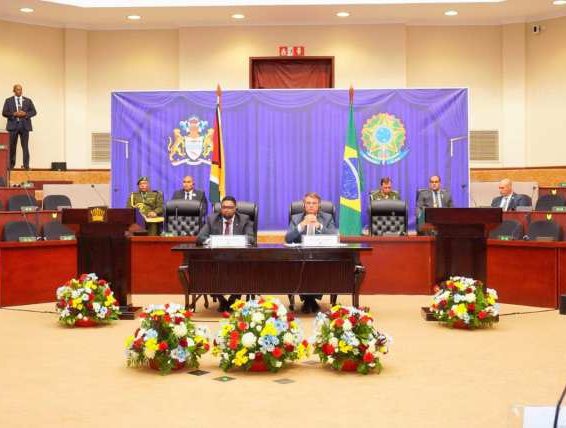 The land transport link between Guyana and Brazil could be significantly enhanced as President Dr Irfaan Ali and President Jair Bolsonaro mull the possibility of road-rail link to further enhance trade relations.

This was among the extensive discussions held on Friday as President Ali welcomed his Brazilian counterpart in Georgetown for a one-day visit during which several high-level meetings and discussions were had.

High on the agenda were talks on the integration of infrastructure, energy security and expanding trade arrangements and opportunities.

On the issue of infrastructure development, President Ali explained during brief remarks at the Arthur Chung Conference Centre (ACCC), where a high-level caucus was held between the two delegations, that the focus is on integrated critical projects such as the deep-water port, the road-rail link, fiber optic connectivity, development of an energy in corridor, the creation of a free zone, and the linkage of natural resource development.

“So, we are not only talking about the deep-water port in isolation of these things. It is now one integrated project that we are looking at. And we’re agreeing to establish a team that will comprise of investors, the Federal Government of Brazil, the Government of Guyana and the State of Roraima, and [we have] defined a time path through which we will move this project forward in an accelerated way,” he said.

Moreover, a joint statement on the high-level visit revealed that during Friday’s engagement President Ali stressed that the establishment of a deep-water port in Guyana, linked with a future road corridor, could have a beneficial impact on the development of trade between the two South American nations and beyond. It was in this context that the possibility of a complementary rail link between the two countries was raised.

According to the missive, both Presidents Ali and Bolsonaro acknowledged the pivotal importance of infrastructure integration to further unlocking the potential of the two neighbouring countries and the wider region.

To this end, the bilateral working group was established and tasked with assessing the potential gains of a Boa Vista-Georgetown Road corridor in terms of trade and investment flows, as well as identifying possible needs of technical assistance and potential private partners and international financial institutions that could contribute to the initiative.

The teams from both sides were instructed to settle, no later than the third quarter of 2022, the measures necessary to enable the full implementation of the Guyana-Brazil International Road Transportation Agreement.

They also agreed to advance the process of implementation of the Memorandum of Understanding (MoU) signed in November 2020 for the Technical Feasibility Studies for the installation of a fibre optic link between Guyana and Brazil.

Friday’s discussions between the Guyana and Brazil Heads of State were a continuation of ongoing talks.

A part from teleconferences, the two leaders had met back in January in Suriname where trilateral talks were held on a number of areas including establishing an energy corridor between the three South American neighbours together with French Guiana.

The joint statement also detailed that Presidents Ali and Bolsonaro on Friday reaffirmed their commitment to further strengthen the enduring ties of friendship and cooperation that have subsisted between their two countries and to cement an enhanced partnership for the future aimed at increasing integration, promoting sustainable development, and advancing the wellbeing of their peoples.

President Ali disclosed that he further discussed with his Brazilian counterpart, collaborating in the oil and gas industry with a focus on renewable energy.

“We’ve discussed working together on natural gas strategy and how that can be integrated in the development of Brazil and how we can coordinate and cooperate in this area. The potential of hydro renewable energy and to look at this in a holistic frame in terms of energy production. We also discuss areas that we can see cooperation in oil and gas. The experience of Brazil in the management of the oil and gas industry itself is immense,” the Guyanese Head of State noted.

Moreover, it was noted that the neighbouring Leaders recognised that the unfolding developments in the energy sector in their respective countries provided scope for an expanded bilateral agenda in energy cooperation, including environmental aspects. They acknowledged the valuable cooperation that was ongoing through the exchange of experiences and knowledge.

As a result, they both expressed interest in intensifying the exchange of information between Guyana and Brazil on the respective national energy plans, the exchange of experiences in regulatory matters in the oil and gas sector, as well as collaboration in the prevention of oil spill accidents. 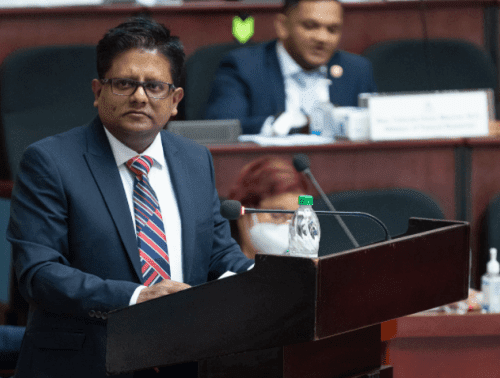 Gazetted Natural Resource Fund transactions to be laid in Parliament

The two Presidents ratified the importance of collaboration in the field of electrical interconnection between Brazil, Guyana, French Guiana and Suriname, and encouraged the Inter-American Development Bank to proceed with the new phase of the technical, economic and environmental feasibility studies, under the Memorandum of Understanding signed in 2019 by that institution and the energy companies of the interested countries.

Further, during the meetings on Friday, President Ali reiterated Guyana’s invitation for Brazilian investment in the energy sector.

In response, President Bolsanaro reassured that he will be encouraging businesses in the Portuguese-speaking nation to explore and take advantage of the many investment opportunities available in Guyana.

Via a translator, the Brazilian Head of State remarked, “We encouraged all of those who are interested in investing in Guyana. Of course, after this visit, we will further encourage and incentivise members of the Brazilian business community to further invest in Guyana.”

The Brazilian Leader went onto note that Friday’s visit in Georgetown has was “very promising” to both countries and their people.

“Guyana has a bright and promising future ahead, especially given its major oil and gas potentialities, but also because of the way your government has fostered closer and closer relations with Brazil. We are, and stand as, partners. And I’m quite certain that, Mr. President, fruits will be reaped as a result of this visit [and] meeting of ours today. Dear President Ali, thank you so much for the opportunity. I feel very honored to deal with the fact that you called me a friend and the feeling is mutual,” Brazil’s President said via translator.

Friday’s visit by the Brazilian President comes just over three months after he was forced to cancel his trip to Georgetown following the death of his mother on January 21.

Upon his arrival on Friday morning at the Cheddi Jagan International Airport (CJIA) President Bolsonaro and his delegation were welcomed by Prime Minister Brigadier (Ret’d) Mark Phillips and Foreign Affairs Minister Hugh Todd before being escorted to State House to meet with President Ali and Vice President Dr Bharrat Jagdeo.