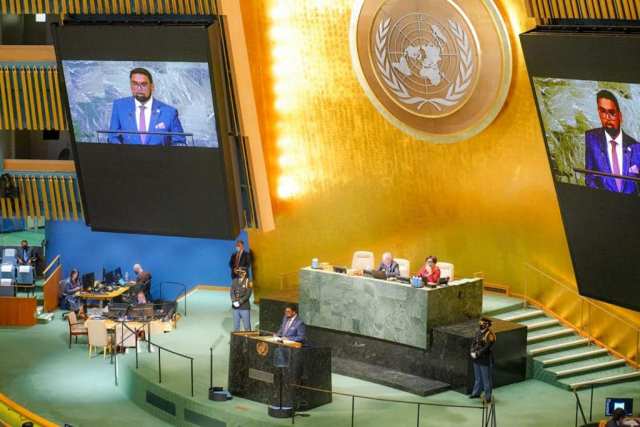 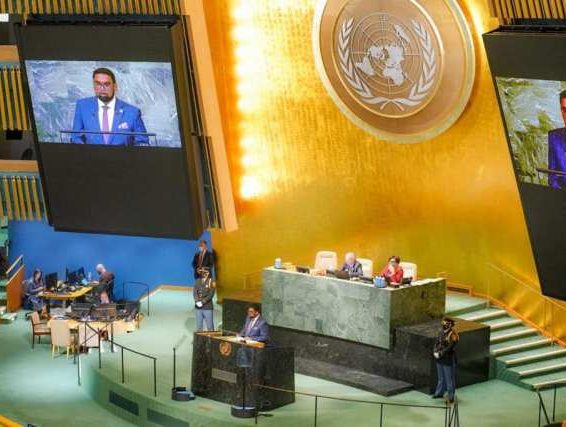 One of 18 leaders to address the 6th plenary meeting of the United Nations General Assembly (UNGA) on Wednesday afternoon was President Dr Irfaan Ali, who used the opportunity to advocate for increased prices for carbon credits on the global market, and for continued access to affordable financing for new entrants to oil production.

He called the US$100 billion pledge made by rich nations at a previous UN climate summit “paltry”, and chastised countries that have failed to meet it, noting that this failure would affect the costs for climate change mitigation and adaptation. This is even with the US$79.6 billion allocated to developing nations in 2019.

According to the President, the current prices for carbon credits on the global market are also inadequate. “The adoption of broad rules on carbon markets in Glasgow has the potential to unlock critical resources for forest-rich countries. Forested countries like Guyana can potentially earn billions of dollars accessible through the voluntary carbon markets,” the President said.

“However, the current approximate price is US$10 per tonne on the voluntary market; while, according to an IMF Report, the price should be closer to US$70 per tonne. COP27 must make progress in refining the rules for the implementation of Article 6 of the Paris Agreement, and make decisions that would increase the price of carbon traded in voluntary carbon markets,” he said.

Touching on the matter of energy and why recent oil producing countries like Guyana should not be penalised, President Ali noted that the world is currently facing an energy crisis that would see global energy demand increasing by 47 per cent in the next 30 years.

“Based on a recent energy outlook from the US Energy Information Administration, coal fire generation is expected to be a key energy component as a result of several factors, including a drop in the share of natural gas and rising oil prices.”

“In this energy transition, fossil fuel remains necessary. We’re convinced that new entrants like Guyana must be part of this balanced approach. Even as a new entrant, Guyana proposed at COP 26 the removal of subsidies from fossil fuel production and advocated the need for a strong global carbon price,” he said.

“We, however, do not believe that new entrants should be punished by removing access to financing and increasing costs of financing. This in effect will protect an existing monopoly, drive up the costs of investments, and deliver a higher-priced product,” President Ali further explained. 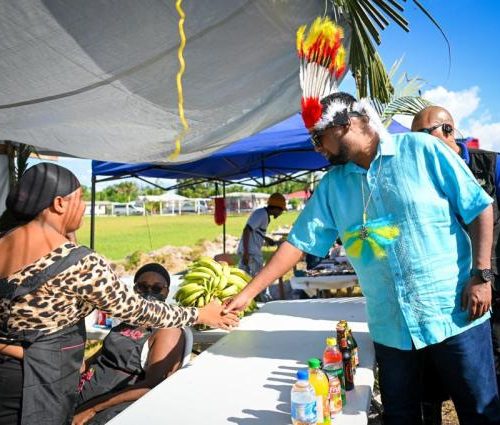 Laluni would be transformed into a food production hub – Pres Ali

The Government of Guyana had previously said that it was carefully weighing global events and developments, and how they may influence the sale of Guyana’s carbon credits, when it decides to go out on the market.

A carbon credit is a tradable permit or certificate that allows the holder of the credit the right to emit a stated tonnage of carbon dioxide or an equivalent of another greenhouse gas.

Countries and companies that exceed their permitted limits can purchase carbon credits from other nations that have low emissions, such as Guyana. Guyana’s 18.4 million hectares of largely pristine forest stores approximately 5.31 gigatons of carbon.

Back in April 2021, President Ali had announced that Guyana had signed a letter of intent with US-based non-profit organization (NGO) Emergent Finance Accelerated Inc to market the country’s carbon credits through a credit contract – a deal that could earn the country millions of US dollars.

Last year, Vice President Bharrat Jagdeo had said that Emergent would soon be commencing work towards marketing Guyana’s carbon credits on the world stage. And indeed, the process of seeking proposals has attracted interest on the world market.

Jagdeo has been vocal about the need for the developed world to create the incentives, including a better price, for carbon credit products from the developing world, as the fate of the world and carbon emission targets hangs in the balance.