Analysis: Boris Johnson’s latest scandal is the worst yet

Brazil will have sold off dozens of airports by end of 2022, government says 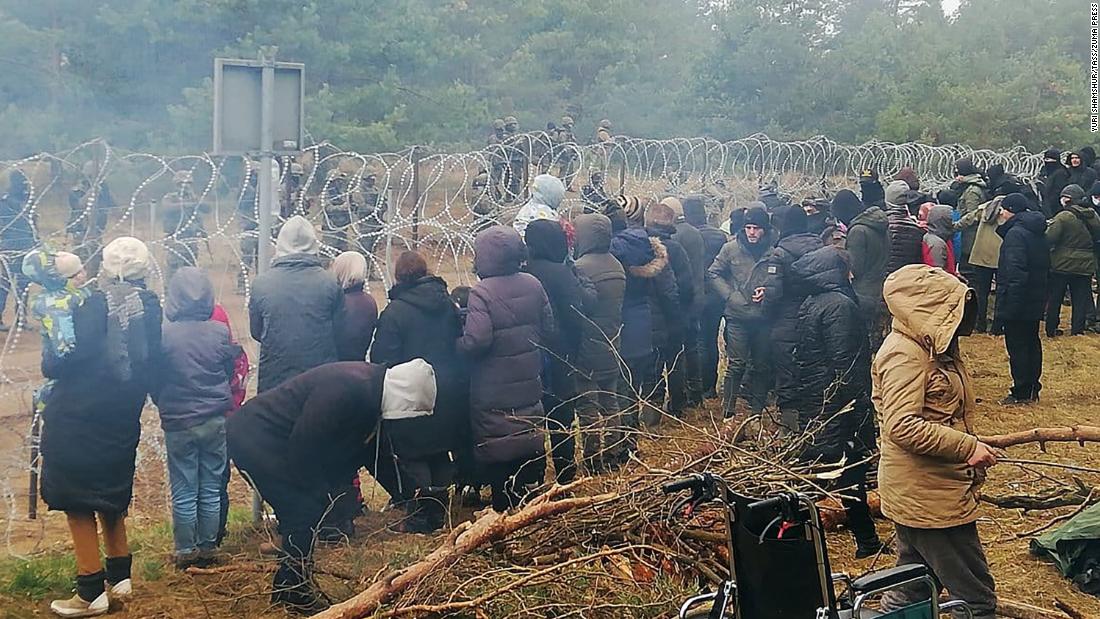 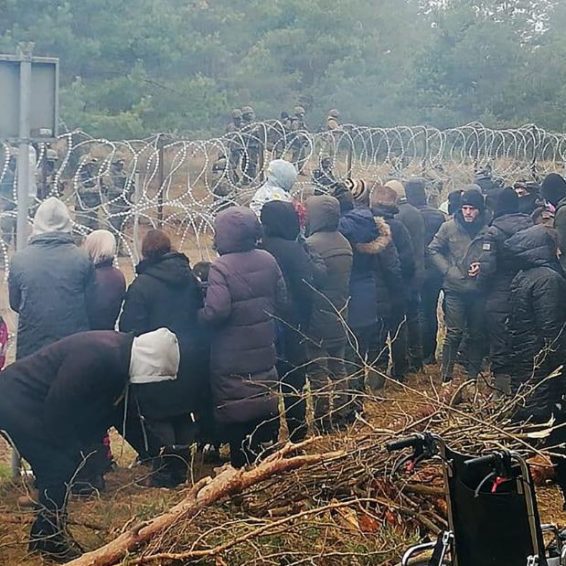 4 weeks ago·8 min read
ShareTweetPinShare
Home
World News
Poland-Belarus border crisis deepens
The content originally appeared on: CNN
The thousands of stranded people are caught at the center of an intensifying geopolitical dispute in which the European Union, the United States and NATO have accused Belarusian leader Alexander Lukashenko of manufacturing a migrant crisis on the EU’s eastern frontier to destabilize the bloc as retribution for sanctions over human rights abuses. His government denies the claims, and instead blames the West for dangerous, sometimes fatal, border crossings and poor treatment of migrants.
The Polish border guard said it had recorded nearly 600 crossing attempts by migrants Tuesday, as well as “three large scale” efforts overnight into Wednesday, with more than 100 migrants in each group trying to breach the fence.
Nine people were detained and 48 people were immediately sent back to Belarus, a border guard press officer told reporters Wednesday. Polish defense minister Mariusz Blaszczak told Polish radio that there was still a substantial group of people on the Belarusian side of the Kuznica border crossing, which authorities closed on Tuesday. A Polish border guard representative previously told CNN that some of the migrants were pushed toward the barriers by Belarusian services.
Blaszczak added that a camp of migrants at Kuznica had also split off into smaller groups, without giving numbers.
Read More

Journalists and aid workers have been blocked from traveling to the area by an exclusion zone put into effect after Poland declared a state of emergency recently. Only local residents are permitted to enter the area after showing identification documents.
Several of those who live inside the zone told CNN the increased presence of military police and border guards has been noticeable and that they aren’t seeing more migrants than normal. Polish rights activists have said the additional troop deployment appears to have sealed the border near Kuznica as they haven’t received any calls from migrants seeking help in the last three days.
Youssef Atallah, a 37-year-old Syrian, arrived in Poland recently after his third attempt at crossing from Belarus. Speaking at a refugee center in Bialystok, he recalled how upon arriving at the border, guards caught his group of four and he was beaten, leaving him with facial injuries, a broken nose and bruised ribs.
“They took us to the forbidden area. That was the first try to cross the border to Poland,” he told CNN. He said Belarusian officials refused to provide medical aid and repeatedly told them to head to Poland rather than return to Minsk.
While making their way through the forest, the group got separated while trying to flee Polish guards. Atallah said his memory of the journey is muddled because of his medical issues but he has been told he spent three days in the forest before he was picked up by Polish police and brought to the refugee center. While making the treacherous journey into Poland, Atallah said he had no food and drank water from a swamp. He added, “I saw stuff left by another refugee group (and) I found a cube of sugar. I just start sucking on it because I can’t chew, I can’t bite or anything.”
He said his experience of the Polish guards and at the center has been starkly different to his treatment by Belarusian officers. “They are very kind with us actually. They took me to the hospital and the crew at the hospital are marvelous. The doctors even gave me clothes.”
Despite the grueling journey, Atallah said he’d make the trip again for his family due to the perilous humanitarian situation back in Syria.

Polish authorities Wednesday posted two videos from the border that they claim shows Belarus troops firing into the ground and scuffling with people. Poland said the footage shows the tactics employed by the Belarusian services to intimidate migrants in their presence. CNN cannot verify that claim as the video is not clear enough to say what is happening — but it is yet an example of the war of words which have escalated in the conflict.
Anton Bychkovsky, the press secretary for the Belarusian State Border Committee, which is responsible for the country’s external borders, pushed back on the allegation, saying the video does not allow an objective assessment of the full picture. He described it as a likely provocation from the Polish side “with the aim of further escalating the situation and diverting attention from its own actions in relation to refugees, as well as for manipulating public opinion.”
Separate footage posted by Polish police to Twitter Wednesday showed rows of officers in riot gear with large protective shields lining parts of the border as helicopters monitor the situation from above. Aerial footage shows tents and smoke billowing from small campfires scattered along the Belarusian side of the barrier close to nearby forests. In other Polish footage shared overnight, soldiers remained in formation closely watching the fencing, occasionally raising torches to check any movement close by, their breath visible in the sub-zero temperatures.
In multiple videos from Polish authorities earlier this week, migrants were seen desperately trying to breach the barriers with shovels, wire cutters and brute force.
Poland, Lithuania and Latvia have seen a surge of people attempting to enter their countries from Belarus in recent months. Many of the migrants — most of whom are from the Middle East and Asia — are hoping to travel on from Poland deeper into Europe. Lithuania declared a state of emergency for a month, which went into effect at midnight on Wednesday.
Meanwhile, video from Belarus state media showed children shouting “Germany, Germany” towards the barrier on Tuesday.
In an attempt to deter migrants, the Polish government has been sending text messages to foreign cell phone numbers in the border area which read: “The Polish border is sealed. BLR [Belarus] authorities told you lies. Go back to Minsk!” It ends by warning migrants against taking pills from Belarusian soldiers — referring to a claim from Polish officials that a migrant was given a tablet before falling ill and dying.
The press officer for the Polish border guard, Katarzyna Zdanowicz, said the situation in the Kuznica area was calm on Wednesday and that migrants had received hot food and drinks from Belarusian servicemen overnight.
Zdanowicz put the number of migrants camped out along the border at around 4,000, citing border guard estimates. She did not rule out the possibility that more people were making their way towards the border area from other parts of Belarus. However, the Belarusian State Border Committee said Tuesday there were around 2,000 migrants at the scene.
Multiple Polish officials have accused Belarus of helping migrants in attempts to cross the border. Deputy Interior Minister Bartosz Grodecki told Polish media on Wednesday that migrants are “constantly transported to the border by the Belarusian services.”
Grodecki also alleged that “apart from the Belarusian services, there are probably also representatives of the Russian services” among the crowds of migrants attempting to breach the border.

As the border row intensifies, the EU has said it is likely to impose further sanctions on Belarus, with the European Commission labeling it a “a gangster regime” on Tuesday and criticizing Lukashenko over his “false promises” that it said lured migrants to the border believing they will gain “easy entry into the EU.”
Polish Prime Minister Mateusz Morawiecki claimed Moscow was the puppetmaster behind the scenes at the border and that Minsk was operating under the Kremlin’s directive.
Speaking in the Polish parliament Tuesday, Morawiecki alleged “the security of our eastern border is brutally violated today by a ruthless dictator who wants revenge on Poland and Europe for opposing human rights violations in Belarus. But we know that his revenge is controlled from Moscow.”
“Russia’s neo-imperial policy is a fact. We are watching the next steps of Lukashenko’s employer — which is President Putin. This is his scenario of rebuilding the Russian empire. A scenario that all Poles must stand up to with all their power together.”
EU accuses Belarus of acting like ‘gangster regime’ as thousands of freezing migrants camp on Polish border
Belarus, which has denied all the allegations, said Wednesday it was seeking a “joint response” with Russia to “unfriendly actions” from EU states.
According to Belarus state media BelTA, Belarus Foreign Minister Vladimir Makei claimed the West was abusing the human rights theme to exert political pressure. In a press conference following talks between Russian and Belarusian foreign ministers in Moscow, Makei said that “a large-scale complex aggression has been unleashed against Belarus,” which cannot remain unanswered.
Russian warplanes performed patrols over Belarus airspace on Wednesday. “These are measures of adequate response to the evolving situation both in the air and on the ground,” the Belarus Defense Ministry said on its Telegram channel. Joint flights with the two countries’ air forces will be “performed on a regular basis” going forward, it added.
The two long-range Russian Tu-22m3 bombers practiced “issues of interaction with ground control points” with armed forces of both countries, according to the Russian ministry of defense.

Migrants caught in the middle

Humanitarian groups have also previously criticized Poland’s nationalist government over its treatment of migrants at the border, where they face grueling conditions as temperatures plummet overnight and a lack of food and medical attention is available. Rights groups have also accused Polish authorities of multiple illegal pushbacks — a claim border officials have rejected, arguing instead that they are acting in accordance with government regulations.
Save the Children Europe Director Anita Bay said the situation at the border was “against EU laws and values” and that states needed to ensure the safety of migrants and refugees stuck at makeshift camps in a statement on Tuesday.
“Children stranded near the border with Poland, Lithuania, and Latvia since the end of August have been struggling with hypothermia, exhaustion, and hunger, while their mental and physical health have deteriorated from their perilous journeys and the drawn-out situation they’re facing,” Bay said. “We’ve seen footage of entire families pushed back to Belarus, and their request for international protection and immediate help ignored.”
Bay said it was “unacceptable that the lives of children and their families are being used as a bargaining chip in a regional conflict” before calling on the EU to provide access “so they can request international protection.”
US State Department Spokesman Ned Price reiterated Washington’s support for Poland on Tuesday, saying “The United States will continue to stand by Poland and all our partners in Europe who have been threatened by Belarus’ unacceptable actions.”