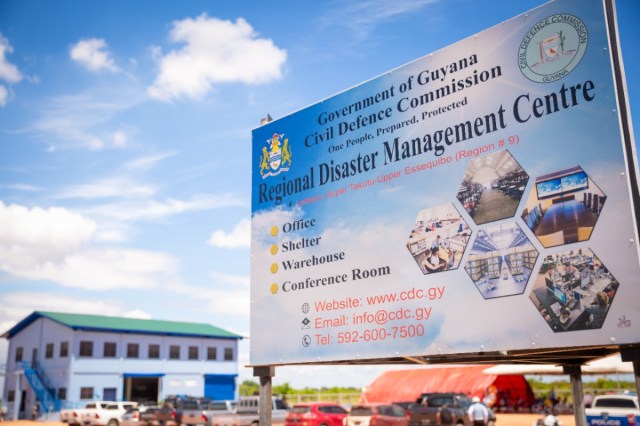 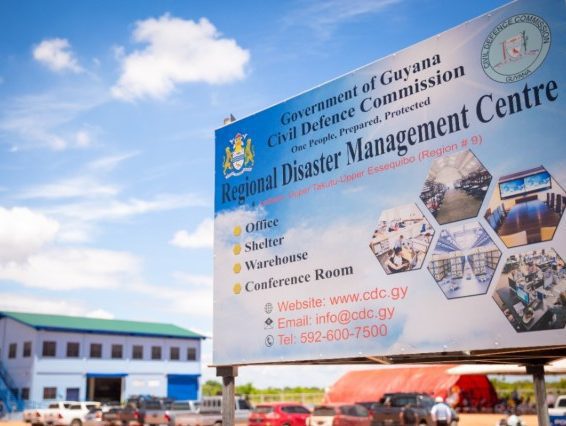 The facility, which cost over G$112 million (inclusive of the building, fencing and landscaping, beds, etc.), is a warehouse, shelter and conference room for the Region.

The commissioning ceremony saw many important invitees such as the Regional Chairman, Regional Executive Officer, Lethem’s Mayor, Deputy Mayor and Town Clerk, members of the Rupununi Chamber of Commerce and Industry, and other Regional Heads. The Regional Chairman, Mr. Bryan Allicock, provided opening remarks, lamenting on the importance of such a facility in the Region. Mr. Allicock thanked the CDC and the Government of Guyana for adding the asset to Lethem.

The Director General of the CDC, Lieutenant Colonel Kester Craig, then gave his remarks, pointing out that the Centre is the first of its kind in Guyana and can be considered as a monumental achievement for Disaster Risk Management locally.

“The warehouse will be used to pre-position and stockpile relief supplies. This is expected to increase the efficiency of emergency response operations in the Region by reducing the cost and time for shuttling relief supplies from Georgetown into the region. The facility will allow for items to be sourced within the region, which is anticipated to have a positive effect on the local economy. Additionally, the shelter facility will boost the region’s capacity to provide housing for residents displaced during floods and other hazard impacts. The office and training facilities will improve preparedness and be used to host meetings, training, simulation exercises and other capacity building activities.”

Lieutenant Colonel Craig praised the Regional Office and Municipality for their continued support during this project and assured all in attendance that the facility will serve the Region, and ultimately Guyana, in the realm of Disaster Preparedness and Risk Management.

The Prime Minister indicated that the Region must take charge of this monumental asset and utilize it in every regard.

“This center, continuous training and injection of other resources along with an active early warning system, will enhance the regional capacity to reduce the loss of lives, damages to assets and put it a step ahead of reducing its vulnerability to hazards. The facility comes fully equipped with all the modern amenities and is ready to use.”

Mayor of Lethem, His Worship John Macedo, delivered the vote of thanks as the ceremony came to a close. The Mayor said the Region is proud to host the first Disaster Management Centre in the nation and will ensure that opportunities are not wasted to use its many features. He expressed gratitude to the CDC, Government of Guyana, Regional Authorities and all others who aided to make the structure a reality.

The Prime Minister was given a tour of the building and was consistently impressed with the layout, amenities and other features.

The CDC will work closely with the Regional Democratic Council and Municipal Authorities to ensure that the center is always ready to support and Management any hazard or disaster in the Region.