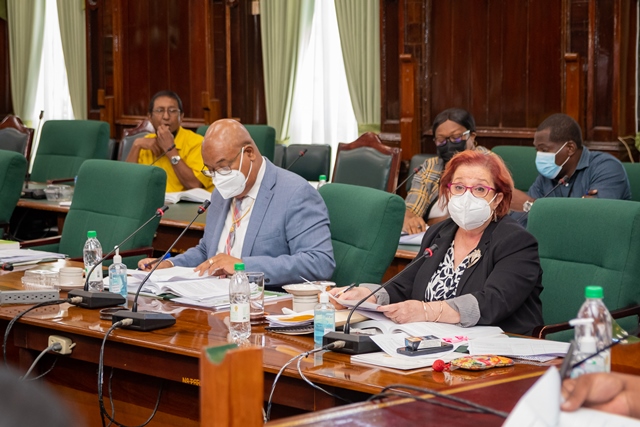 Minister of Parliamentary Affairs and Governance Gail Teixeira, on Monday denied a request made at the Public Accounts Committee (PAC) to further statutorise the meetings of body.

In a brief interview on the sidelines of Monday’s meeting, Minister Teixeira explained that there was no need for the committee to designate any other days to meet. The committee, she said, has mechanisms to address any additional work of the committee.

“Throughout all the Public Accounts Committees…we have from time to time met specially, with consensus, because of a particular task to do. What the opposition has been trying to do is statutorise other meetings. We are saying there’s no need for that. What has worked from 1966 to now can continue to work. We agree to meet when it’s necessary to get our work done,” Minister Teixeira explained.

The Minister made reference to a previous PAC meeting, where a consensus was arrived at among members of the committee to determine an appropriate time for another meeting, should it become necessary.

“Under Mr. Irfaan Ali’s chairmanship in the last PAC, they tried to get around some of the regional presentations and met several days in a row, to try to move the issues of the regional reports. That was their solution and it was worked out between the chairman Mr. Irfaan Ali, now President, and Volda Lawrence, Minister of Public Health at the time,” she detailed.

Minister Teixeira noted that after a lengthy discussion on the issue, the request was out-voted by PAC members.

The Minister said the government is willing to come to a mutual agreement with the opposition to schedule meetings of the PAC, as it becomes necessary.

PAC government members in October, issued a statement calling out opposition members on their “crass bullyism”, noting that the addition of another statutory day to the weekly sitting could potentially stymie the work of the government.

This is because PAC requires the presence of constitutional representatives such as the Auditor General and Accountant General.

“[They] carry out hectic and critical posts in the executing of their mandates as well as the management of the government on a day-to-day basis,” the statement stated. [Extracted and Modified from DPI]