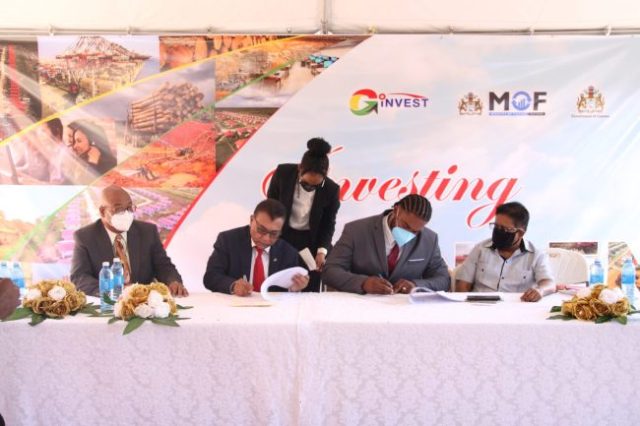 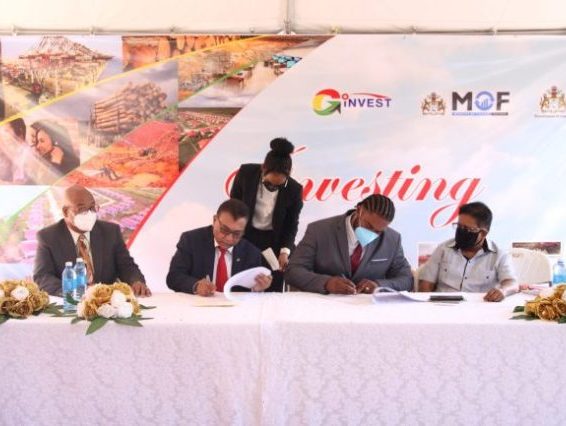 More than 250 persons in Linden, Region 10 (Upper Demerara-Berbice) will soon be gainfully employed following the signing of a Memorandum of Understanding (MoU) for the establishment of a Call Centre in the mining town.

The MoU was signed between the Government of Guyana and MIDAS BPO on Friday by the Chief Executive s (CEO) of Go-Invest Dr. Peter Ramsaroop and of MIDAS BPO, Malcolm Sobers.

Senior Minister in the Office of the President with responsibility for Finance, Dr. Ashni Singh, MP, in his address said government is building an industry that will create meaningful employment for young people. He said the call centre industry is able to create more jobs for young people than any other sector.

Dr. Singh said the PPP/C Administration remains committed to its promises. In addition to pushing for the creation of 50,000 jobs, the government has also liberalised the telecommunications sector, as promised in its manifesto. The liberalisation will help investments like MIDAS BPO.

Reading an excerpt from the manifesto, Minister Singh said “the ICT sector if properly incentivised, can generate thousands of new jobs through co-investment, providing infrastructure support, state sponsored training and employment opportunities for the disabled.

“I want to submit to you my brothers and sisters of Linden, that what you are witnessing here today, is the living manifestation of this very paragraph in action. A partnership with a private company, investment in infrastructure, facilitation of infrastructure and improved and more affordable access and job creation.”

Minister of Public Works, Bishop Juan Edghill, MP who also delivered remarks, said the signing of the MoU is a signal that government is a partner for development. Minister Edghill said a mature political culture is what is required for the township to be developed.

“What we are doing here is to the benefit of Linden, jobs coming to Linden. Every political leader in Linden, if they take to a platform, they will speak about high unemployment in Linden, that is the issue. Well, here it is your government, the PPP/C Government is answering by way of a solution, by bringing to Linden an opportunity for Lindeners to be employed and work in Linden.

“So, what we need, is a clear statement to investors and others. We are going to behave in a mature and a responsible way that people can invest, benefit from their investment and that the people of linden could get real jobs.”

Meanwhile, the CEO of MIDAS BPO noted that there is a genuine interest by the government to create employment for Guyanese. He said four years ago he approached the previous administration to undertake the same venture but was faced with roadblocks.

“It is an extreme pleasure, it is a dream, the highest portion of motivation to see that we are able to do this when we have all of the things that we need in place. We have the government’s support, we have a very progressive business happening, we have very committed clients that are looking to grow significantly in Guyana, and we have the potential with prospective employees here.”

Sobers said 95 per cent of the positions at the centre will be filled by Lindeners. He said the hope is that by October 15, at least 75 persons would be employed following a job fair set for October 1 and 2. He said by the end of the year, another 150 persons should be employed, and based on the job demand, that figure could double.

Sobers disclosed that in the near future, MIDAS BPO will expand its operations to Regions Two, Three, Five and Six.