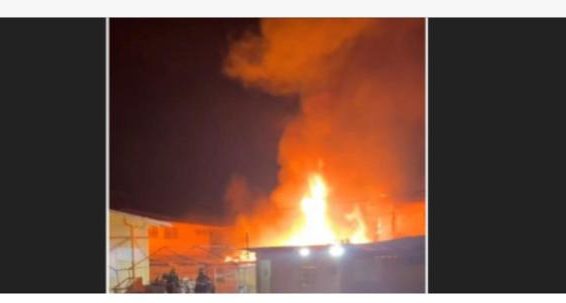 Off-duty firefighter “reprimanded” for responding to fire without safety gear

The off-duty firefighter at the scene of the fire [Guyana Daily News photo]An off-duty female firefighter has been reprimanded for responding to the fire at Camp and Charlotte Streets, Georgetown.

This was confirmed by Public Relations Officer of the Guyana Fire Service (GFS) Silyne Griffith who told media operatives that “that firefighter breached the protocol and was reprimanded for doing so.”

The PRO was at the time providing clarity on a statement issued by the GFS which stated that “it is against protocol for a firefighter to mount/ride the fire truck without being in full firefighting gear.”

The PRO further indicated that while the firefighter did not ride the truck, she showed up on the scene of the fire and provided assistance without wearing protective gears.

For this, the PRO indicated, the firefighter was reprimanded.

When asked what penalty was meted out against the officer, the PRO did not respond.

The fire in question erupted at around 21:00h last evening and resulted in several persons being homeless.

The house which served as an apartment building was completely destroyed leaving two persons homeless, while two other buildings suffered minor damages due to the radiated heat.

The supposed cause of the fire at this time is malicious setting by person (s) unknown.

There were no casualties or injuries sustained by any firefighter or civilian as a result of the fire.

The Guyana Fire Service is therefore refuting several inaccurate reports made by the Guyana Daily News in relation to the fire.

Contrary to what was reported, no firefighter fell into the burning building or needed to be rescued.

Additionally, it is against protocol for a firefighter to mount/ride the fire truck without being in full firefighting gear.

The Daily News report which stated “when the report was made, the brave Rogers, who was not on duty, jumped onto the truck and headed to the scene” is therefore incorrect and brings discredit to the Fire Service.

Another section of the report falsely stated “Daily News learnt that at the time of the report of the fire, there was a domino competition at the fire station”.

The GFS strongly denies this allegation and would like to clarify that there was NO domino competition being held at the time of the report.