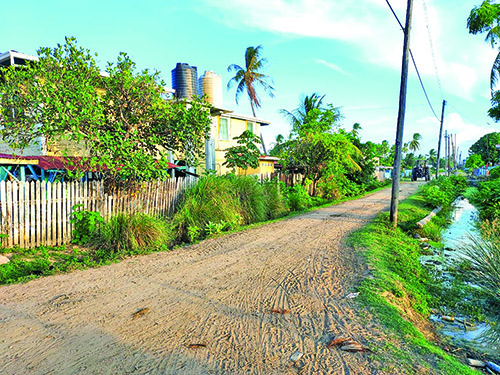 Number Naught – a village created by a surveyor’s error

Region Six is the easternmost Region of Guyana and borders Suriname. The region has vast tourism potential from the country’s largest beaches to bird watching, fishing and numerous tourist sites.

Most of the region’s economic activity takes place on the Corentyne and that is where we find the smallest village- just 13 house lots in length.

Situated to the western end of the 52-74 Neighbourhood Democratic Council (NDC) is Number Naught Village.

As strange as the name may seem, even stranger is the fact that it falls right between Numbers 54 and 55 Villages.

In that NDC, all of the villages are 750 meters or half a mile in length but it was an error on the part of a surveyor that created Number Naught Village.

In 1958, D. M. Edghill was tasked with marking the villages along the Corentyne; each village being 150 rods or as it is converted today, 754 meters which is half a mile.

What Edghill did while in the area which will eventually form the 52-74 NDC, was to start surveying from both ends and he was left with 130 meters.

Between Number 54 and 55 Villages the space was left and so, Edghill made a new Village with the little space and it was called Number Naught Village panning just 13 house lots on either side of the Corentyne Highway.

Most of the males work as labourers in the rice industry or as fishermen while others are into cash crop farming. Even with a scarcity of jobs, large rice farmers cry that there is a shortage of labour. That is to say that on many occasions it is very difficult to get people to work.

“If you ask them to work, the first question they ask is, How much you paying?’, and they don’t want to come and work with you for a week or month, they want to do job work and if you are not paying that like that they don’t want to work,” Bassant Lalapersaud a rice farmer said.

Kamile Babsie, one of the oldest residents of the village, stripping sijan at her roadside stall

However, while such jobs are available in the small village of Number Naught, those seeking other jobs have no place within the village to find them.

One of the known characters in the village is ‘Kaka Now C’ who is referred to as the ‘Village thief’.

“We always losing something, from you fowl to you fruits in the tree,” one resident told this publication.

“If you leave you bicycle, he would pick it up and ride away and whenever he stop that is where he would leave it.”

The use of illegal drugs by many youngsters is a cause for concern to many of the older folks there.

However, despite not currently having any teacher, police officers or other public servants living in the village, Number Naught still has its pride.

A cricket club which was feared by many other teams on the Corentyne and with the likes of Ramdeen Mohobir the village was proud of its sportsmen. But, some also some very fast horses came from the village. Many recall the lightning speed at which Confucius, Shadow and Golden Arrow went around the track collecting trophies at every outing.

Meanwhile, Black Shadow still remains in the dark as the horse has not been able to take the track since being imported to Guyana because horseracing has been put on hold as a part of the measures introduced to prevent the spread of Covid-19.

The village also offers fresh fruits with some bearing all year round as well as fresh vegetables all year.

So, the next time you are on the Upper Corentyne, do not pass without stopping. Everyone has a fruits tree. [First published in the Guyana Times]