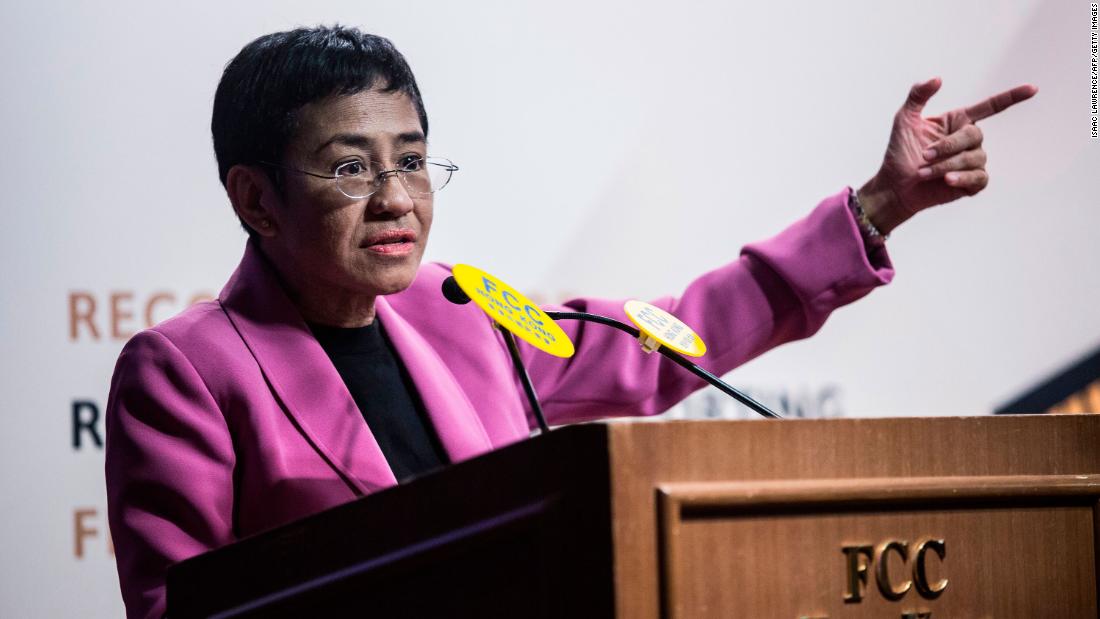 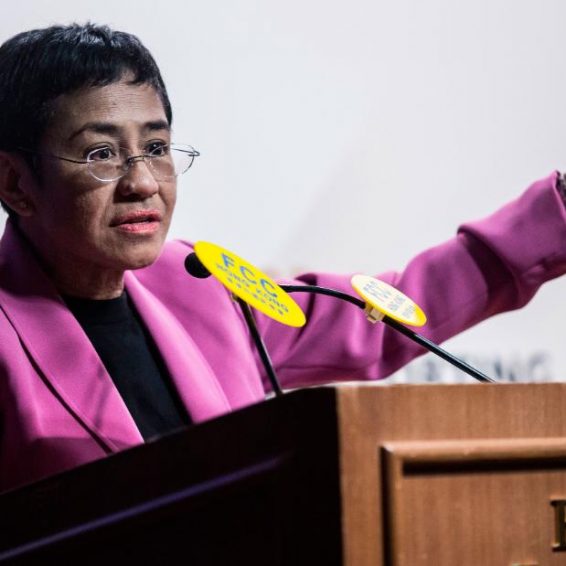 1 week ago·3 min read
ShareTweetPinShare
Home
World News
Nobel winner Maria Ressa vows to fight for facts and the rule of law
A day before receiving the Nobel Peace Prize, Ressa — the CEO of news site Rappler — spoke to CNN from her home in the Philippines.
Ressa discussed the 2022 Philippines presidential elections, which will be held in May next year. Rodrigo Duterte is standing down after a single six-year term in power.
A former CNN bureau chief and TIME Person of the Year, Ressa has been engulfed in legal battles in recent years and says she has been targeted because of her news site’s critical reports on Duterte.
“I have covered this country since 1986, I’ve never been the news but the only reason I’ve become the news is because I refuse to be stamped down, I refuse to stop doing my job the way I should,” Ressa said.
Read More
“I think rule of law is critical for any democracy because if you don’t have rule of law then it is a hop, skip and a jump to fascism, because then whoever is in power decides who lives and who dies, literally.”
Before co-founding Rappler, the Filipino-American journalist spent nearly two decades as a lead investigative reporter for CNN in Southeast Asia.
“I’m very lucky because of CNN. You know. I had enough of a network to be able to fight back … I’m not fighting against the Duterte administration, I’m fighting for my rights. I’m still idealistic,” she said Thursday.

Ressa shared this year’s Peace Prize with Russian journalist Dmitry Muratov, who heads the independent Russian newspaper Novaya Gazeta. Ressa is the first woman to be awarded a Nobel Prize this year.
“Free, independent and fact-based journalism serves to protect against abuse of power, lies and war propaganda,” Berit Reiss-Andersen, chair of the Norwegian Nobel Committee, said as she announced the prize in Oslo on Friday.
In a news release, the Nobel Committee said Ressa used “freedom of expression to expose abuse of power, use of violence and growing authoritarianism in her native country, the Philippines.”
It added: “As a journalist and the Rappler’s CEO, Ressa has shown herself to be a fearless defender of freedom of expression. Rappler has focused critical attention on the Duterte regime’s controversial, murderous anti-drug campaign.”
Speaking to CNN on Thursday, Ressa highlighted the challenges she and Rappler have faced covering news in the Philippines under Duterte’s regime.
“At CNN, I covered all the presidents since 1986 and I’ve never seen rule of law be so patronage-driven and selective,” she said.
“Journalists have been targeted in ways that we’ve never gone through since the days of (Ferdinand) Marcos. In less than two years I’ve had 10 arrest warrants against me and I haven’t done anything different from what I’ve been doing (before).”
In August, a Philippine court dismissed a cyber-libel case against Ressa, one of several lawsuits filed against her.
The #HoldTheLine Coalition — a group of press freedom and rights advocates including the Committee to Protect Journalists and Reporters Without Borders — welcomed the dismissal of what it described as a “spurious charge” and called “for all remaining charges to be immediately dropped and the endless pressure against Ressa and Rappler to be ceased.”
Ressa was convicted in June last year in another cyber-libel case, filed by businessman Wilfredo Keng, and faces six years in prison unless the charge is overturned on appeal.

Ressa: ‘A battle for truth’

With regard to the elections scheduled for next year, Ressa told CNN that reporting the facts was vital if democracy was to function properly.
“How are we going to have integrity of elections if the platforms that deliver the news are biased against facts, that they actually spread lies laced with anger and hate? How are we going to have integrity of elections? This will be a battle for facts, it will be a battle for truth,” she said.
“There’s a lot at stake for the Philippines [in 2022] because if we don’t get fact based, evidence based reasoning, a shared reality, then we’re not going to come out of this. We’re going to splinter even further.
“But I’m not sure that’s not the state of the world … the weaknesses began when journalists lost our gatekeeping powers to technology. They’re intertwined to me, the collapse of democracy starts with the breakdown of facts. And if you don’t have facts you don’t have the shared reality to find the right path. This is a global problem.”