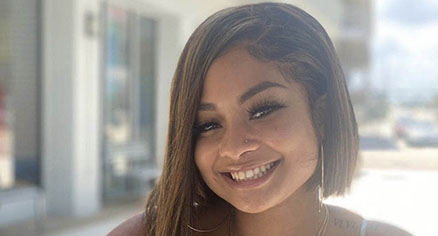 No Evidence That Caribbean American Teen Was Sexually Assaulted

Mina said that Miya’s body was bound with black duct tape across her mouth and tape also tying her hands and feet together. She was found wearing jeans and a bra, as well as a robe and her purse was found nearby containing the shirt she was last seen wearing.

Her cause of death has not yet been determined.

The confirmation came as Orange and Osceola Counties Chief Medical Examiner Dr. Joshua Stephany positively identified the female body that was recovered in a wooded area on October 2nd as Marcano.

Mina said he understands the family wants to place blame somewhere but was clear that “the person responsible for Miya’s death is Armando Caballero.”

Mina said officials still think 27-year-old Caballero, a maintenance employee at the Arden Villas complex where Marcano worked and lived, was waiting for her inside her apartment Sept. 24, before he killed her and dumped her body at another Orlando area apartment complex.

After Marcano missed a Sept. 24th flight from Orlando to visit her family in South Florida, her family asked the Sheriff’s Office to check on her at the Arden Villas apartments near UCF, where she lived and worked, according to the statement from Jodi Lewis, a spokesperson for the family’s attorney Daryl K. Washington.

During that welfare check, the deputy found Marcano’s bedroom door was blocked from opening by a dresser, which meant a roommate had to enter Marcano’s room from a back window, the statement said, adding that a responding deputy “noticed the window had been tampered with.”

“The deputy communicated to Miya’s mother that based on the condition of the room, it appeared something happened, however the deputy left, and the family didn’t hear back with any information about what the deputy intended to do,” the statement said.

Marcano’s family said they got little information from OCSO for hours while deputies brushed off their concerns. Later, according to the video also released by the family Wednesday, a deputy let Caballero, later named a “prime suspect” in Marcano’s disappearance, drive away.

Marcano, a graduate of Flanagan High School in Pembroke Pines, was in her second year at Valencia College in Orlando, pursuing an arts degree. Miya was the daughter of Trinidad born, US-based deejay Marlon Marcano, aka DJ Eternal Vibes and Giselle “The Wassi One.”