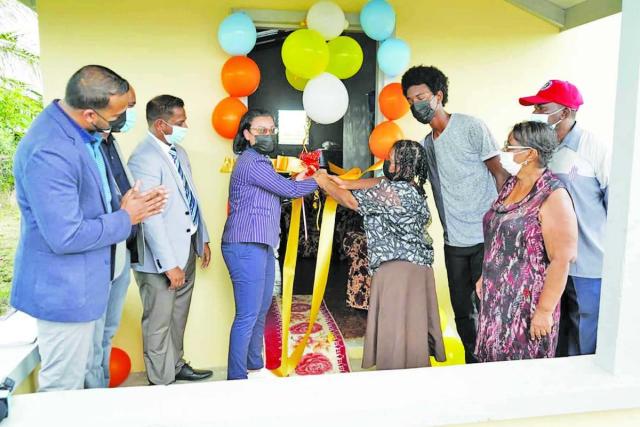 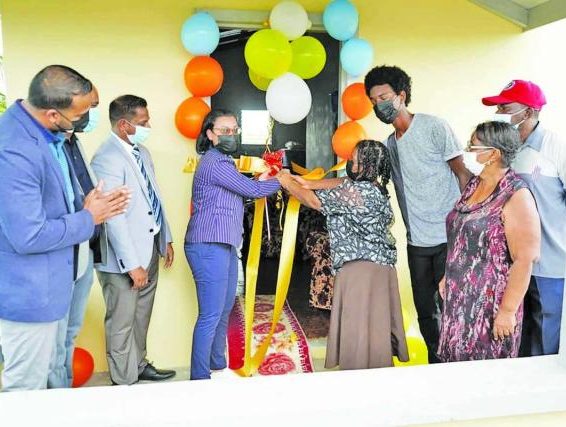 After struggling to construct a home for almost 12 years, a single mother of six was on Friday given the keys to a brand-new home which was constructed by the non-governmental organisation, Vitality Inc.

Fifty-seven-year-old Rutel Henry had acquired the land back in 2009 and over the past 12 years had been making plans to build a house but because of financial constraints coupled with illness, she could have only secured the blocks to make the pillars.

Thanks to the NGO, Henry and her 16-year-old son now have a roof over their heads.
Director of Vitality Inc, Abbas Hamid explained that the organisation has been involved in charitable work in Guyana since its launch last year and would have committed to construct several houses in collaboration with stakeholders including the Government of Guyana.

“In order for us to reach out to those people in need, we decided to work with the Government of Guyana and civil society because they are the ones who are at the grass root and who knows, the people that are in need.”

The $2.7 million two-bedroom home is equipped with sanitary facilities and a water trestle. This is the second home constructed by Vitality Inc, with the first being in Region One (Barima-Waini).

Meanwhile, Minister within the Ministry of Housing and Water Susan Rodrigues, who was also at the handing over ceremony on Friday, explained that Vitality Inc has a great sense of corporate social responsibility and has been contributing towards the development of Guyana.

“There is only so much Government can do and it is always important for the business community to be conscious of its social responsibility, the people who live around you, the needs of society and you must be willing to give back and to help. There are always these cases that may not be highlighted.”

Rutel Henry stands in front of her new home

$12M worth of ganja found at Scottsburg

She referred to Henry’s story as a sad one, noting that the house lot is in one of Government’s housing schemes.

The single mother has been working as a janitor at the Berbice Cricket Board office and fell ill, making it more difficult for her to acquire the necessary funding to construct her home.
Henry said she was overjoyed and even happier when she saw it was a concrete house and not a wood house on stilts which she was thinking of.

“I got sick and because of my sickness, I was unable to build the house. I started to put down the post but then I got sick, so I am very happy today.”

Henry explained that with her new house she will be saying goodbye to her landlord, noting that she will be able to do much more since she does not have to pay rent.