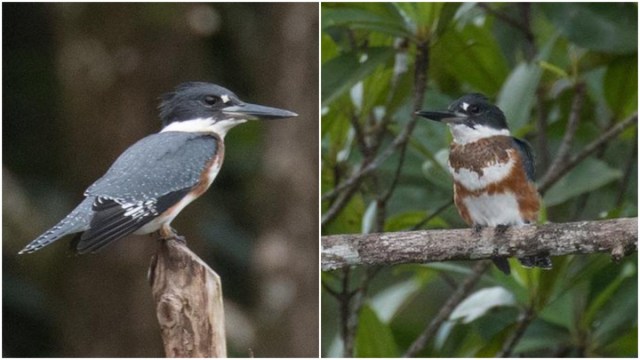 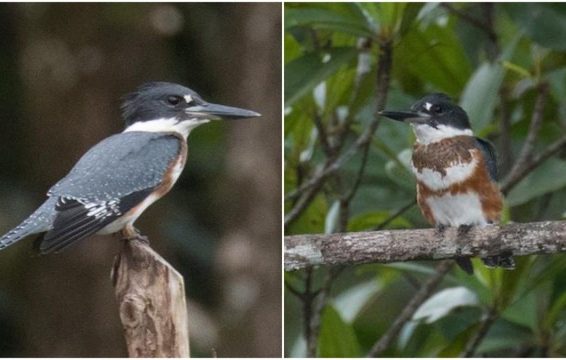 New species of bird recorded for the first time in Guyana

Birding experts Brian O’Shea and Leon Moore have recorded a new species of bird in Guyana during an ongoing study being conducted in Region One (Barima-Waini).

The new recorded species is the black-chested tyrant, which is more commonly found in neighbouring Brazil, Suriname, and Venezuela. It has a chestnut head, a black breast band, and gray underparts. This species has a large range, and does not approach the thresholds for vulnerability.

In addition to this new record, the experts also made the first confirmed record to the belted kingfisher, which is a stocky, medium-sized bird with a large head with a shaggy crest. Its long, heavy bill is black with a grey base. The belted kingfisher’s breeding habitat is near inland bodies of waters or coasts across most of North America, within Canada, Alaska and the United States.

The belted kingfisher was already reported as a new record but there was no evidence of this until now, when O’Shea and Moore succeeded in capturing a photograph.

“For new birds to added to any country list, you need picture proof or a voice recording to back up the sighting,” Moore explained in an invited comment to INews.

The Black-chested Tyrant [Leon Moore photos]The discovery of both birds was made along the Barima-Mora Passage (BMP) in Region One, which, according to Moore, “holds great promise as a megadiverse site with high tourism and conservation potential”.

“Our survey will provide the first comprehensive list of birds for the BMP, thereby adding to the emerging baseline dataset of vertebrates in the region, and will also build capacity of local scientists to conduct follow-up studies and monitoring,” the birding expert highlighted.

The first day of the birding study with experts Brian O’Shea and Leon Moore. They are conducting an orientation class on the various equipment with the Region One participants. [Guyana Marine Conservation Society photo]This birding study is being conducted under the auspices of the Guyana Marine Conservation Society which is led by environmentalist Annette Arjoon-Martins.

In addition to Moore and O’Shea, there are seven local participants from Region One engaged in this activity.

Moore is a native of Linden, Guyana and is the founder of Leon Moore Nature Experience. He has conducted bird surveys in both Guyana and Suriname, most recently working with shorebirds in partnership with the US Fish and Wildlife Service and BirdLife International. In the course of his work, Moore has trained and supported several budding field ornithologists in Guyana. He is an accomplished tour guide and photographer, and serves as a regional reviewer for eBird in Guyana.

O’Shea has studied birds in the Guianas for more than 20 years, working with many organisations including the Smithsonian Institution, Conservation International, WWF, the Iwokrama International Centre, and the South Rupununi Conservation Society. He currently runs long-term survey projects in Iwokrama and the southern Rupununi, and serves as a regional reviewer for eBird in the Guianas. O’Shea has mentored several students in Guyana and Suriname and believes strongly in fostering the development of skills that lead to career opportunities in environmental management and conservation.

NRG Holdings Incorporated, which is a Guyanese consortium that is developing a massive Port of Vreed-en-Hoop Project, provided $5 million to the Guyana Marine Conservation Society to fund for the birding study.

Arjoon-Martins, during an interview with this publication, lauded the efforts of the team in making these remarkable discoveries.

“Despite the rain being very terrible and giving them a challenge, imagine that they found two previously unrecorded species,” she remarked with excitement.

“They are on the river as early as 04:30hrs in the morning because that’s the best time to be prepared to get the birds, in the early morning period, and they basically do the bird watching there and then go and walk transects into the forest, to also go back to check, maybe where they see two species, they might see eight.”

According to the environmentalist, this birding study will bring tremendous benefits to the people of Guyana.

“So not knowing that we have these very rare species in Region One, now that we have it, we can now take steps and have the populations increase. So, this in itself would be a natural attraction for the tourist who want to go to Region One,” she explained.

Day Eight of the birding study. Here, the team is situation along the Barima River and in Benda Creek. [Guyana Marine Conservation Society photo]The areas being captured in the study include the Lower Kaituma area all the way down to Imbatero.

In fact, Arjoon-Martins explained that her organisation plans to establish a Research Centre in Imbatero for “national researchers to come and stay there while conducting studies”.