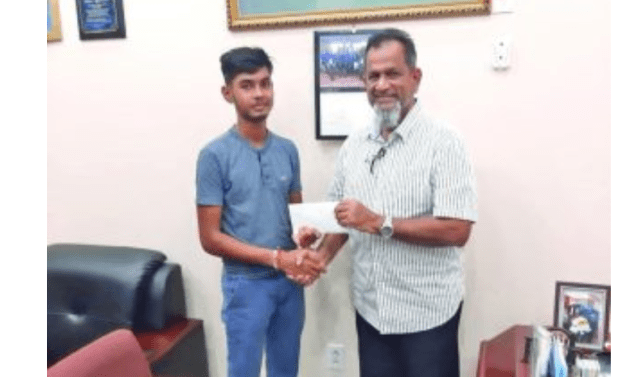 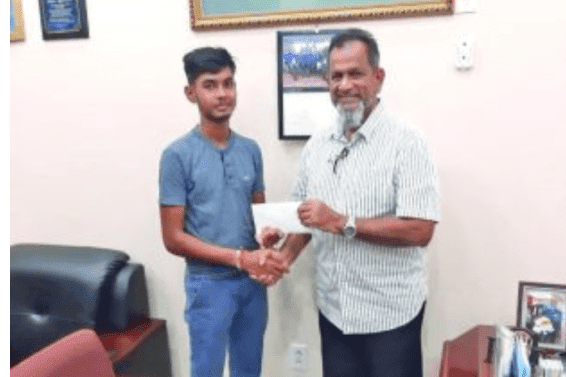 The struggles of one of the top Caribbean Secondary Education Certificate (CSEC) students of Essequibo Coast have not gone unnoticed, as Mohamed’s Enterprises has thrown its support behind the academic pursuits of Parmesh Ramgobin.

On Sunday last, the Guyana Times featured the top students of Essequibo Coast. During the interview, Ramgobin, who secured 15 grade ones and 5 grade twos, told his story about his struggles and his mother’s indefatigable efforts to give him a proper education.

Ramgobin, a teen who attended the Anna Regina Multilateral and who hails from the community of Charity, aims to further his studies in order to achieve an associate degree.

“I must say that it was a tough journey, and the struggles were real. My journey to school was not a smooth ride. From where I live to where I needed to be in order to catch the bus, it was tough walking to get there, especially when the rain pours down and makes it almost impossible to access the road,” Ramgobin had told this publication.

He added, “During my studies, I was surrounded by many beautiful souls, who encouraged me to push a little harder; and that was exactly what I did. I began taking many extra lessons, some that were dismissed until 6 in the evening, and getting transportation to head halfway across the Essequibo Coast was not easy. I would reach at home until 7 in the evenings…it was at that moment I realised that hard work really does pay off.”

Ramgobin also said that he had seen his potential, and after being encouraged by his lesson teacher and parents, he decided to write 20 subjects at the CXC exams.

“These subjects required a lot of effort and hard work, and I was ready for that; but what I didn’t anticipate was COVID-19; no one anticipated that. COVID-19 was one of my biggest struggles. Being a Garde 10 student, it was imperative that I attend school, as most of the curriculum is done at that level. However, the virus deterred me from that, and there was nothing I could’ve done, as we were kept at home for almost 8 months. From then onwards, I was faced with numerous struggles,” he said.

Ramgobin said his private extra lessons were costly, and this forced his mother to seek another means of income in order to cover his lessons’ expenses, which included transportation fees.

“Mommy at the time said that my education is important, and because of that, she started to fry chips: plantain, cassava, sweet potato, and chicken foot, and sold them to nearby shops…even at my lessons, I would take her chips to sell, just for me to receive money to pay my lesson fees,” the young man had stated.

Having read Ramgobin’s story, businessman Nazar Mohamed, who is also from the Essequibo Coast, contacted the teenager and offered to support his academic pursuits. He has already started his studies at the University of Guyana (UG) reading for a degree in Biology.

Mohamed, in an invited comment, stated that he was taken aback by the struggles of the young man, and wanted to assist him in any possible way. As such, the businessman has committed to assist him throughout his academic pursuits.

“It is quite unfortunate to read stories about the struggles of young people as they pursue their academic goals, and it is with this in mind, and more so because I am from the region (Region Two), I have decided to assist the young man,” Mohamed stated.

In a brief comment, the teenager, who is elated for the generous assistance, stated that it is indeed a blessing to have received such generosity. “Words are not enough to express how grateful I am for such an assistance…because of him, I am now a step closer to achieving my goals… I will always have him in my prayers,” the teenager added.

He further stated that the businessman is generous, and the world needs more like him. Meanwhile, he promises to make full and effective use of the assistance, and will undoubtedly make the businessman proud.