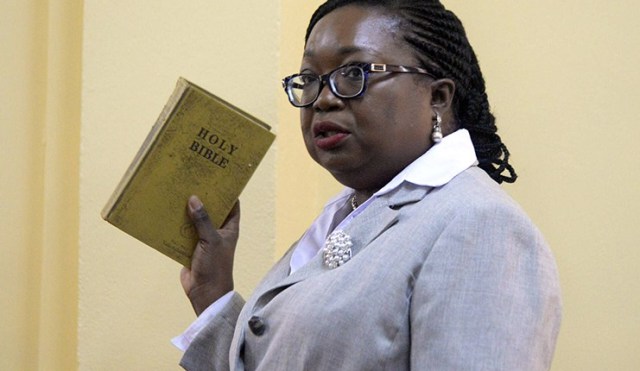 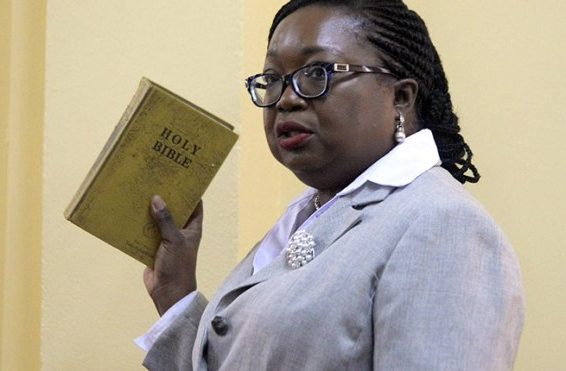 On Thursday, September 30, High Court Judge Franklyn Holder will rule on an application for judicial review filed by the Director of Public Prosecutions (DPP) Shalimar Ali-Hack, SC, who is seeking to quash the decision of Senior Magistrate Leron Daly to have the two counts of misconduct in public office against former Deputy Chief Elections Officer (DCEO) Roxanne Myers proceed indictably.

In February, Magistrate Daly ruled that a PI will be conducted into the charges against Myers to determine whether there is sufficient evidence to warrant a jury trial at the High Court.

In coming to her decision, the Magistrate had overruled submissions by a team of lawyers hired by the DPP to prosecute the electoral fraud cases against Myers and others.

It is alleged that between March 4 and 14, 2020, at High and Cowan Streets, Kingston, Georgetown, Myers wilfully misconducted herself together with former Region Four Returning Officer Clairmont Mingo and others, to declare a fraudulent account of votes for the Regional and General Elections of March 2, 2020, the said misconduct amounting to a breach of the public’s trust in the office of the said Returning Officer without any reasonable excuse or justification.

In her application for judicial review filed against Attorney General Anil Nandlall, SC, and Magistrate Daly, the DPP is seeking an order of certiorari quashing the decision of the Magistrate on the ground that it is irrational, unreasonable, arbitrary, ultra vires, without legal foundation, contrary to natural justice and without legal authority.

Ali-Hack, among other things, is also asking the court to grant an advisory declaration that in the circumstances of the charges and in compliance with the Constitution of Guyana and a fair trial that the charges against Myers proceed by way of a summary trial.

In her application, the DPP deposed that Magistrate Daly, in her oral reasons, said that the charge against the former DCEO was serious and should be heard indictably. The DPP said that the Magistrate likened the offence for which Myers is charged to that of armed robbery and theft as far as the court’s sentencing powers were concerned.

According to Ali-Hack, Magistrate Daly also expressed concerns about the maximum penalty that could be imposed by the Magistrate’s Court and effectively stated that the summary court is not able to punish adequately for the offence. But the DPP contended that Magistrate Daly’s decision engages Article 144 of the Constitution with the likely result that the case may not be tried within a reasonable time.

In arriving at her decision, the DPP contended that the Magistrate failed to consider that the High Court could impose no greater penalty than the Magistrate’s Court on any conviction for the offences charged and erroneously proceeded on the basis that the High Court could in certain circumstances impose a greater penalty than the Magistrate’s Court.
“The Learned Magistrate took into account matters Her Worship could not properly in law take into account, namely that on a trial by indictment before the High Court, the Judge could use aggravating matters disclosed by the offences to impose a penalty which was greater than that which could be imposed by the Magistrate on summary disposal,” the DPP argued.

The Senior Counsel submitted that the question of the adequacy of the punishment which could be imposed by either court was the substantial basis for the exercise of the Magistrate’s discretion. She argued further that the Magistrate failed to consider that the right to a fair hearing within a reasonable time is for the benefit of both the prosecutor and defence.

The DPP argued, too, that Magistrate Daly failed to consider and/or failed to take into account that the resources of the State would be better utilised by the expeditious hearing and determination of the charges against Myers. Against this backdrop, Ali-Hack contended that the “decision by Magistrate Daly offends Article 144 (1) of the Constitution which provides that all criminal cases should be afforded a fair hearing within a reasonable time.”

Meanwhile, special prosecutor Attorney-at-Law Donavan Rangiah in an affidavit in support of the DPP’s application pointed out that the criminal justice system functions slowly, especially as it relates to jury trials, and this is now worsened by the COVID-19 pandemic.
Rangiah said that there are presently over 350 matters awaiting trial in the Demerara High Court, and with the current pace of trials it is unlikely that the charges against Myers would be heard within the next four years. As such, the lawyer said he is satisfied that the penalty available to a Magistrate upon a conviction is a maximum of one year imprisonment and not the common law maximum.

Additionally, Rangiah said that it is accepted practice in Guyana that most criminal matters where the punishment is within the Magistrate’s range of punishment [except for those that cannot be heard summarily], be heard summarily.
Considering this, he argued that is it irrational and unreasonable for the Magistrate Court to conduct PIs for matters which can be dealt with summarily and punished adequately, and which the State wishes to proceed with summarily.

The prosecutor pointed out that in every previous instance in which the State has proffered a charge of misconduct in public office the matter was dealt with by way of a summary trial.

“There are other charges of misconduct in public office related to allegations arising out of the March 2020 elections and only recently the Chief Magistrate has ruled that she can adequately punish in the event of convictions. That some of the elections-related charges should be heard summarily and some have to be tried indictably would frustrate the administration of justice and leave significant matters of national importance unresolved for a long time,” his affidavit reads.

The more than 25 matters are currently before three Magistrates – Chief Magistrate Ann McLennan and Magistrates Sherdel Isaacs-Marcus and Leron Daly.

Lowenfield’s report claimed that the APNU/AFC coalition garnered 171,825 votes while the PPP/C gained 166,343 votes. How he arrived at those figures is still unknown.
The certified results from the recount exercise supervised by GECOM and a high-level team from the Caribbean Community (Caricom) pellucidly showed that the PPP/C won with 233,336 votes while the coalition garnered 217,920.

The recount exercise also proved that Mingo heavily inflated the figures in Region Four – Guyana’s largest voting District – in favour of the then caretaker APNU/AFC regime.