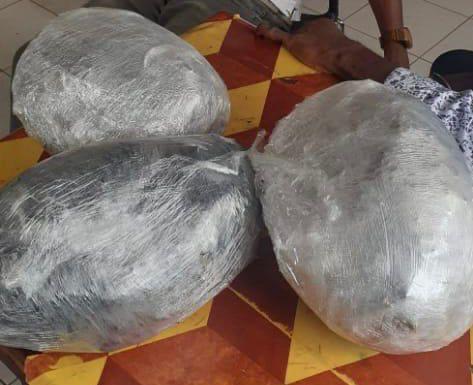 Two men have been taken into police custody after they were busted with some 15lbs of marijuana.

The bust was made at around 11:30hrs on Sunday along the Seafield Public Road, West Coast Demerara.

Reports are that a Police mobile patrol, acting on information received, stopped a minibus and escorted it to the Weldaad Police Station.

At the station, a search was conducted on a 44-year-old male passenger where three wrapped parcels containing leaves, seeds and stems suspected to be cannabis were found in his travelling bag which he had in his possession.

He was told of the offence, arrested and cautioned and admitted possession of the said suspected cannabis.

A further search was carried out in the minibus where a green and grey haversack was seen in the trunk belonging to a 23-year-old male passenger. That too contained three bulky parcels containing leaves, seeds and stems suspected to be cannabis were unearthed.

Similarly, that passenger was told of the allegation, arrested and cautioned and he denied possession of the said narcotics.

The suspected cannabis were weighed and those found in the first suspect’s possession amounted to be 3175 grams while the second set of cannabis weighed 3853 grams.

Both suspects are presently in custody as further investigations are underway.