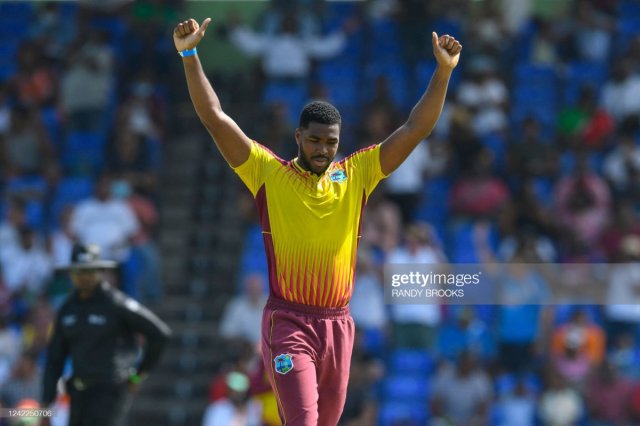 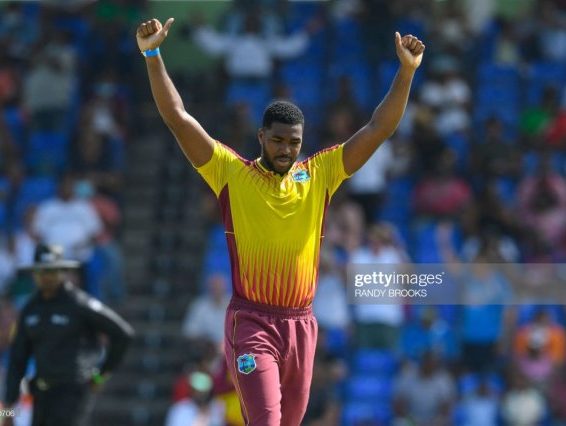 [ESPN Cricinfo] West Indies complicated a comfortable chase of 139, with a final-over no-ball by Avesh Khan turning out to be the trigger for their five-wicket win to level the five-match series against India. They took it deep as the visitors tightened the screws in the middle overs – at one stage, the hosts needed 75 off 72 balls with nine wickets in hand – with Devon Thomas capitalising on the free hit to slam a six, followed by a four to wrap up a nervous chase.

Earlier in the day, Obed McCoy achieved West Indies’ best bowling figures in T20Is – and the best against India by any side in the format – as the visitors provided another peak into the future by putting up an alarming display of their new-found T20 batting method, where they were willing to risk the big hits despite successive loss of wickets.

Brandon King, of West Indies, hits 4 during the second T20I match between West Indies and India at Warner Park in Basseterre, Saint Kitts and Nevis, on August 01, 2022. (Photo by Randy Brooks / AFP) (Photo by RANDY BROOKS/AFP via Getty Images)

Opener Brandon King then smashed 68 off 52 balls, and ensured he held one end up after West Indies were at a nervous 83 for 3 in the 13th over.

McCoy’s 6 for 17 pushed India back in the death overs, where he got four of his wickets after getting the first two inside the third over of the match. India crashed to 138 all out with two deliveries left in the innings after being 104 for 4 in the 14th over, with the scoring drying up considerably as wickets fell; just 75 runs came off the last 74 balls with the loss of wickets, as Hardik Pandya and Ravindra Jadeja were forced into a repair job after some fanatical firing by the top order.

McCoy masters the powerplay and the death overs

It all started with the first ball of the match: Rohit Sharma got a lifter outside off, which he fended to short third off the shoulder of the bat, with the extra bounce which McCoy gained turning out to be a decisive factor as the innings progressed. He bowled a wicket-maiden to start the match, mixing the back-of-a-lengths with the fuller ones to keep new batter Shreyas Iyer quiet over the next five balls.

In the third over, McCoy struck off the first ball. Inviting Suryakumar Yadav to drive at a full-length delivery bowled form wide of the crease and angled across the right-hander, he had the batter edging behind. Pant and Iyer did try taking McCoy on in the same over, but after two overs, his figures still read 2-1-10-2.

India were mellowed down by the time McCoy returned to bowl the 17th over in his second spell – they were 112 for 5 after a rollercoaster first half of the innings – but had Jadeja and an in-form Dinesh Karthik at the crease. That is when McCoy affected a change of pace, luring Jadeja to loft to long-on when the latter went in search of boundaries after a dry period.

Just five came off that over, and with all of India’s momentum sucked, McCoy struck three times in the 19th over to add to his tally. After getting Karthik caught at short fine leg, he spotted R Ashwin trying to get across, and slipped a full delivery outside off, which Ashwin skied to deep point while hitting against the breeze.

And a little bit of luck also went McCoy’s way when a hesitant review by Nicholas Pooran discovered Bhuvneshwar Kumar had tickled a tight, good length delivery to the wicketkeeper, thus rounding off a dream spell.

Five sixes – and just one four – in the powerplay even with three wickets down, and 56 on the board. This, despite the first over being a maiden.

Bazball fever caught India’s top four, who bashed at will despite losing wickets successively. By the end of the seventh over, India were 63 for 4, the run rate and the wickets both being on the higher side an unusual sight for India in T20Is. 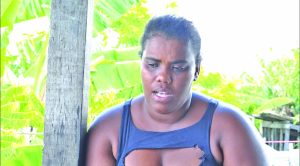 With no run on the board off the first eight deliveries, Suryakumar brought out the effortless loft over mid-off, playing with a high left elbow against Alzarri Joseph, a shot which Iyer emulated just three balls later, as India’s aggressive intent mingled with the short boundaries at Warner Park to start their innings on a thrilling note.

And while Suryakumar edged behind for 11 from six balls, Rishabh Pant flicked his second ball for six over fine leg. Next over, Pant swat-pulled for another six, while Joseph had Iyer caught behind when the ball took off from the pitch again.

Three balls later, Pandya hit what was the first four of the innings – off the 29th ball, by when four sixes had already been crashed – before hacking another six over deep point to start in a hurry like his partners.

The powerplay was done, as Pant welcomed Akeal Hosein with the treatment he usually reserves for Jack Leach, lapping him for four off the second ball of the seventh over, only to walk down next ball and mistime a heave to deep midwicket for 24 from only 12 deliveries.

India were 61 for 4 after 6.3 overs, when some calmness descended. Pandya and Jadeja added 43 off as many balls in a contrasting approach, as India looked to rebuild. But from 104 for 4 in the 14th over, the visitors crumbled to lose 6 for 34, folding up with two deliveries left in the innings.

Five minutes after the rescheduled toss time of 10am had passed, a further delay of 55 minutes was announced with a new revised start of 1.30pm local time (11pm IST).