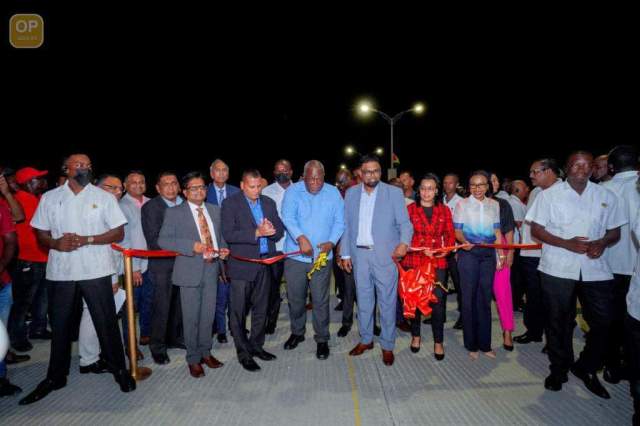 The much-anticipated Mandela-to-Eccles four-lane Highway was commissioned on Thursday evening and according to President Dr Irfaan Ali, similar developments can be expected across the country over the coming years.

“Development will come and it will come rapidly. To support that development requires rapid infrastructural transformation,” the Head of State related during his address to the gathering.

The President outlined his Government’s vision for the expansion and enhancement of Guyana’s roadways that will allow persons to travel from Berbice and have several alternative routes to take them to the East Bank Demerara (EBD) corridor as well as along the West Coast and West Bank of Demerara.

These, he noted, will be complemented by various industrial estates along the East Coast Demerara (ECD) corridor, modern hotels and hospitals, and Government centres that are all slated to be underway by the year 2025.
“What I explained to you is not dream or fairy but it is an introduction to Guyana 2025,” he posited.

The Mandela-to-Eccles highway was conceptualised by Dr Ali during his stint as Housing and Water Minister under the previous People’s Progressive Party/Civic (PPP/C) Government. However, it was noted that the project was left languishing over the five years under the previous A Partnership for National Unity/Alliance For Change (APNU/AFC) coalition regime.

The $2.6 billion four-lane road runs from Mandela Avenue all the way to Eccles, EBD, and works are currently ongoing on a second phase to further extend the road to Great Diamond, EBD.

Construction was executed by eight contractors and completed in less than one year. The road features an asphaltic and concrete round-about with reinforced concrete sidewalks. The four-lane roadway runs for 2.8 kilometres and includes parking lanes, 12 bridges, stones on the median, and 214 solar-powered lamps among others.

However, one of the most striking features of the new highway is its modern security system, which President Ali explained is aimed at preventing loss of lives along the new road.

This new security feature will be operational in three weeks’ time and will be able to track vehicles and drivers on the highway thus removing the need for Police Officers using the ‘speed guns’.

The new security system will be connected to the ‘safe country solution’ and the ‘safe city solution’. There will be a monthly printout of tickets against those delinquent road users and the document will be sent to their addresses.

Those persons will then be required to clear their tickets with the GRA and failure to do so would result in the non-renewal of their registration and road licence.

He added that the Government would soon be making the necessary adjustments to the relevant traffic laws to cater for the use of this system as well as putting in place new and stricter penalties for errant drivers.

“The adjustments in laws will come where necessary to activate the demerit system for drivers so that those who continuously abuse the roads will lose their licences,” he stated. 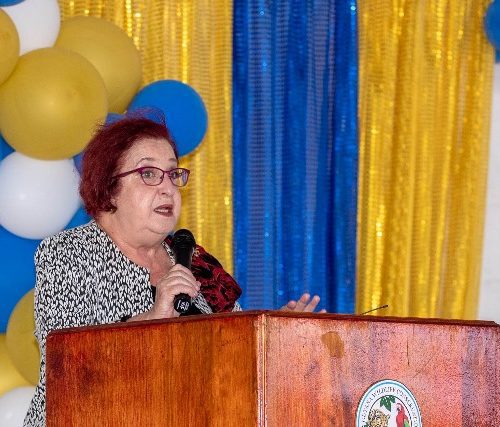 President Ali further disclosed that only recently a study found that the average truck was recorded doing 60 km/h at the roundabout, which has a 30 km/h limit. He described that finding as the “speed of death”.

Meanwhile, similar sentiments were expressed by other speakers during Thursday’s commissioning ceremony.

They included Housing and Water Minister Collin Croal, who pleaded with road users to be responsible.

“I wish to plead with all of you to help to take care of the country’s assets by using the road responsibly,” he stated.

According to Croal, this critical infrastructure will not only reduce travel time for residents along the East Bank corridor but will also increase property value in its surroundings as well as give birth to new housing schemes and commercial zones.

Minister with the Housing Ministry, Susan Rodrigues said, during her remarks, that in addition to benefiting people, the four-lane roadway served as the new paradigm shift in the way things would be done under the PPP/C Government.