Twenty-six-year-old Linden Fordyce also called ‘Blacka’ on One Mile, Wismar Linden is wanted by the police for the murder of 28-year-old Rosmarisf Revolledo Torres also called “Mary” who was shot dead during an altercation at Mowasie Landing on Friday.

It was reported that on the day in question, Torres’ sister, her two friends, and a male, Andrew, were consuming alcohol next to the deceased’s shop.

At the time, the suspect who also operates a shop in the area was engaged in a heated argument with his 18-year-old girlfriend. In trying to make peace, one of Torres’ Andrew went over to the suspect’s house and asked him to behave himself.

Torres also spoke with the suspect about his behaviour, but this angered him.

This resulted in a heated argument between Torres and the suspect. At the time of the argument, Torres was carrying a cutlass in her hands and she started to fire chops at the suspect but missed.

In retaliation, the suspect picked up several pieces of bricks and started to pelt Torres and the others.

Torres along with her 12-year-old daughter, sister, and two friends escaped in some bushes about 250 feet away from the landing.  The suspect reportedly climbed onto a motorcycle and went after them.

Police stated that Torres’s daughter told investigators that the suspect, who was armed with a suspected pump-action shotgun, discharged three rounds in their direction during which her mother and another woman, Eliannys Perozo, received injuries.

Her mother, she stated, fell on her back and became motionless. Torres’s sister reportedly made it back to the landing and raised an alarm. The matter was immediately reported to the Police via a 911 call. 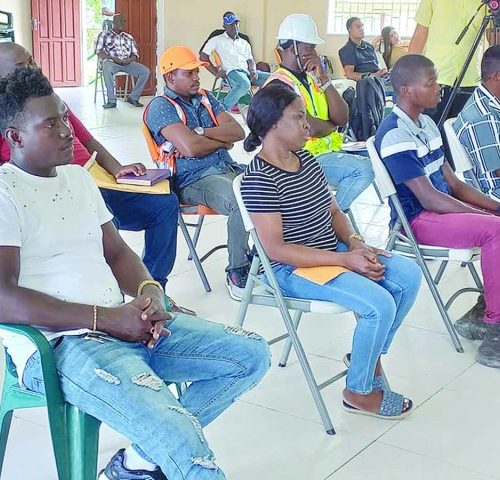 Farm to market road, 16 bridges for Buxton/Foulis: to be done by small contractors in community

Upon their arrival, Police ranks found Torres lying on her back with gunshot injuries to her upper left back, left ribs, and upper left thigh. On the hand, Perozo sustained a wound to her left side head, and three wounds to her right shoulder.

The scene was processed during which three pairs of slippers, a silver chain, three beer bottles, a small pair of scissors, and a red head tie were found.

Torres and Perozo were taken to the Mahdia District Hospital where Torres was pronounced dead. Perozo was treated and admitted as a patient in a stable condition.