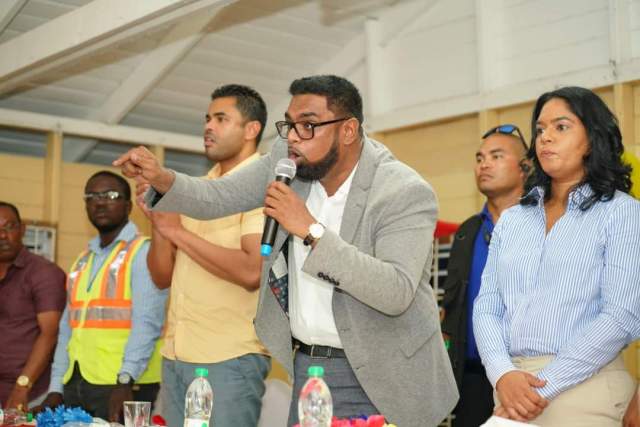 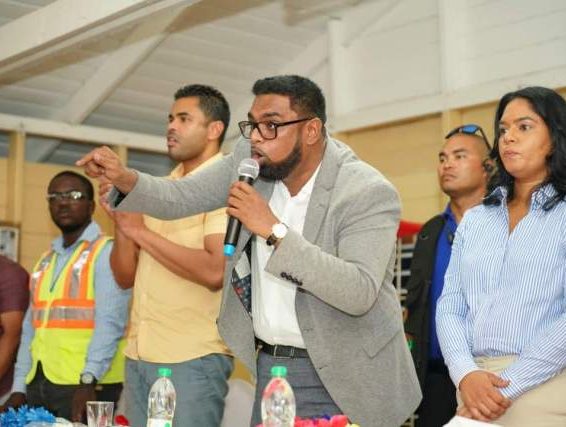 ‘Leave the politics out, let the people work with us’ – Pres Ali tells Mocha NDC Chair

Attempts by the Chair of Mocha Arcadia Neighbourhood Democratic Council (NDC) Rudolph Adams to politicise the apparent non-allocation of a $4 million grant for priority activities in the community was on Sunday dismissed by President Dr Irfaan Ali, who reminded that almost $200 million in road works along with other transformative projects are being done for residents there.

President Ali on Sunday led a high-level delegation to the community where he officially opened the $59 million newly-rehabilitated Burnham Boulevard roadway – an initiative which was embarked upon after he received a letter of complaint from a resident.

During the commissioning ceremony, President Ali announced that some $192 million will be expended on road works within the community.

Following the commissioning ceremony, the Head of State and his team of Ministers hosted a community meeting whereby residents had an opportunity to raise their respective concerns with the President.

When his turn came around, the NDC Chair raised a number of issues with President Ali, who diligently provided answers and explanations to the community leader’s concerns.

However, the NDC Chair continued to raise the matter of Central Government’s allocation of $4 million to various NDCs and Mocha Arcadia’s exclusion from this initiative.

In June 2021, the Local Government and Regional Development Ministry distributed grants valued at $4 million to several NDCs in Region Four (Demerara-Mahaica) to assist with issues in the respective neighbourhoods.

President Ali pointed out, however, that though Mocha Arcadia did not receive that allocation, the community has been benefitting in different ways.

“There are many NDCs that can tell you we did not invest $192 million in their community, we can be very idealistic and very selective about the type of arguments we want to make, I am working with everyone, the NDC but more importantly the people are coming along with me on this journey, because the people of this country require leadership.”

In this regard, President Ali highlighted that, “we are going to be working with the villagers in this NDC because they have been asking us to work with them to have them involved in the small contracts for the cleaning up of the community. What this NDC Chairman is not telling the community is that the Ministry of Agriculture is working with farmers to create drainage for over 100 acres of land…”

Though this was pointed out by the President, the NDC Chair made continuous attempts to discuss the matter of the $4 million allocation – trying to insinuate the an ‘APNU/AFC-controlled area’ was neglected for political reasons.

However, President Ali immediately interjected and there was a verbal exchange with the NDC Chairman.

“It is an insult for you to tell these people that their lives are controlled by the coalition. No one life is controlled by anyone but God, take that and take it to the bank and bank it!”

“I am here as the President of Guyana and I dare not take my eyes and pass these people and tell them their lives are controlled by the PPP Government.”

“Leave the politics out of this, the people of this country want us to lead, let the people work with us on the development of the people.”

Moreover, the NDC Chair had also asked for a bobcat to be presented to the community to assist with the booming housing drive. But President Ali indicated that this request seemed unnecessary.

“We’re presenting you with roads, drainage, agriculture land, recreational facilities, all of those things, after providing the bobcat, we might need to provide fuel…so let’s deal with the issues that are priority issues,” the Head of State asserted.

Meanwhile, earlier in his address to the residents, President Ali reiterated his message of building a “One Guyana” and encouraged residents to be independent thinkers and not be swayed by political persuasions.

“We can give everything you want, and still you will not be satisfied because someone is messing with you internally, mentally, psychologically…let us think for ourselves, let us advance our community first, our families first, our country first,” President Ali said.

“Let us not be bogged down with a narrative that tries to influence us mentally and psychologically,” he added.