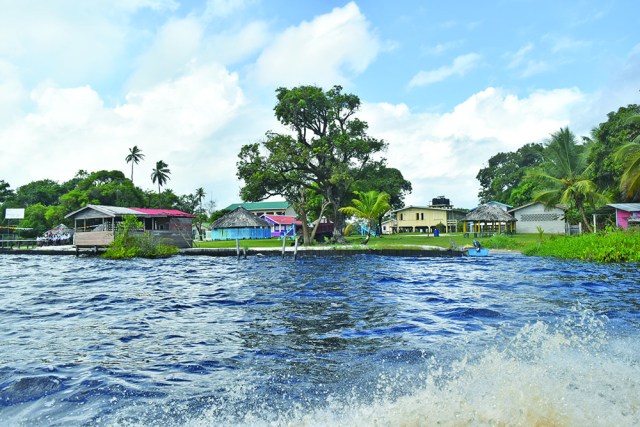 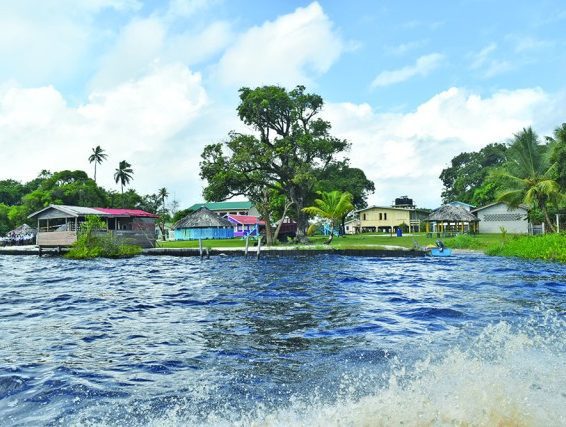 Guyana’s long history of slavery is often punctuated with revolt and resistance involving African slaves. However, a story that is not quite often told is that of an instance of Amerindian resistance which birthed one of Guyana’s most beautiful tourism destinations.

Situated on the Essequibo Coast, a trail break-off between Taymouth Manor and Alliance leads to this hidden paradise. Lined with vast, lush, green rice fields as a stark reminder of the county’s agricultural prowess, a red dirt road is arguably the focal point, as traversing vehicles bump and teeter along the rustic trail.

After several minutes of travel, the road opens up to a cluster of trees, poignant in the middle of which is a wooden landing, sturdy enough to take on the weight of all those who dare to make the trip. The landing shoots out briefly into the lake, where boats are docked and ready to take their tourists on their majestic expeditions. Or, for the faint at heart, the red dirt road continues in a semi-circle, around to the other side of the lake, where the brave-hearted boat passengers also meet.

At that Lake top location, visitors can take in the marvellous beauty that Capoey is. This is also the point at which most visitors spend their time when planning a trip to Capoey, and while beige-hued beaches and rainbow coloured benabs with thatched roofs may be enough for some, there is much more that this Lake village can offer to Guyana’s tourism product.

The story of Capoey is an interesting one, and it is safe to underscore that there isn’t any one story that sums up the history of this quaint village. In fact, according to Toshao Ralph Hendricks, the history of the area is rich, and waiting to be gobbled up by those fascinated with the combination of history and scenery.

“This place where you’re standing was once a plantation. The Amerindians were once slaves right here, and the lake wasn’t like this. There was a creek running straight down to the sea. So, whenever it dries, you see the embankments, I think cane was once planted here,” Toshao Hendricks told visitors, whilst standing on one of the very embankments he was describing.

Villagers served up fresh water coconuts, which are one of many fruits grown in the community

He continued his tale about his ancestors’ escape from slavery by explaining, “But we were very smart, we didn’t want to be slaves, so we got away. We went over this side. And the lake wasn’t like this, so when you reach over the opposite side, the moon starts to raise, so that’s how we got its name.”

Capoey, a Wapichan word meaning ‘Land of the Rising Moon’, was given as name to the village surrounding the vast lake, one of the largest in the Essequibo river, alongside Tapakuma and Mainstay. Although the village has Wapichan origins, there is also Arawak ancestry enshrined.

Hendricks disclosed why by stating, “At some time or the other, they said, there was a plague that wiped the entire Wapichan tribe out, and then we had an (inhabitation) of Arawaks, so it has a great history.”

The Mission, where most Capoey residents reside, and which houses its school, village office, bakery, library and sports ground, among other things, was founded by Missionaries in the 1900s. The villagers, while clinging to the Christian teachings, also hold on to the Indigenous practices. As a result, the community is proficient in hunting, farming, timber harvesting and traditional Amerindian craft-making.

The locals navigate the area by addressing various parts as Mission, top and point, and as one would expect, their chief mode of transportation is by boat. Taking into account all these characteristics, Toshao Hendricks is firm in his belief that Capoey can grow into a much larger tourist destination.

At present, visitors from across Guyana make the trip to spend a day on the beach, but Hendricks is looking to showcase or tell much more about his beloved Capoey. Based on this desire, the Toshao is working along with the Tourism Ministry and the Guyana Tourism Authority in order to have a guest house built, so visitors can stay overnight.

“It has a rich history. What you see here, you can see development here – resorts with many beaches going up right now, and the village itself is going into tourism, and we have some very famous stories, which we can’t tell within two minutes.”

As he stood on the edge of the beach, Hendricks pointed to different parts of the sprawling Lake Capoey and said, “On the opposite side, we have a second lake, Lake Calabash, and then that way, you see a lot of palm trees. That is more rich history, we call it Matilda Pond. That pond leads from Matilda straight into Pomona.”

However, to tell the story of Matilda, the Toshao opted to take his visitors out onto the lake, banked in a clump of ‘bizzy-bizzy’, where Guyana’s largest caiman (according to the villagers) is rumoured to reside, either for the scenery or for dramatic effect.

He began: “Matilda was an old lady, but she was not a PI man, she was a PI woman, so she know her stuff. She grew two granddaughters, and as children, they caught a little fish. They put it in a little pond, and they used to feed this fish every single day. The fish started to grow and grow, and they also keep on growing, but the fish keep on digging a pond all the time. Digging and digging and digging.

“Eventually, they hit puberty, and their grandmother told them, ‘Do not go to that pond at all’, cause she already know is what kind of fish.”

With his voice growing loud in excitement, the Toshao said, “When she went to the farm, the girls didn’t understand, but they went to bathe in this pond, so the fish just take them away. When Matilda come home, no grandchildren. She search all around, shout, no grandchildren.

“She realise what happen, so she start to smoke. She make black tobacco with weena and cackaralli bark, that is a big cigarette. She start to chant and sing and chant and sing, and eventually the grandchildren them come with the fish, but they can’t come out back from the water anymore,” Hendricks continued.

The Toshao paused to look around at his captivated audience, “She had a problem, she tried to bring them back, but she couldn’t get them back on the land anymore, because the fish was a ‘water mumma’. It was a ‘water mumma’ fish. So, what she did, because she love her grandchildren, she decide to go with them.

“So, what she did, she went and clean up her house and everything, make a next big tobacco, and start chanting on her bench, and the bench start jumping, going all the time to the pond. So, when it reach the pond now, Matilda gone. Disappear,” he said with a tone befitting the intriguing folklore.

“And they said that that pond comes straight out at Pomona, so that this is where it’s supposed to be. And if you go into the pond and you get the right track, you can come out till at Pomona. So, that’s a small legend of the Matilda Pond,” The Toshao concluded his story.

Enthralled by the ancient folklore was Tourism Minister Oneidge Walrond. After taking in all that the lake and village had to offer, Walrond again made a play for Guyanese to explore the destinations within their country.

“Guyana needs to be showcased. To showcase this beauty, to show to the rest of the people that this is what they’re missing out on. To encourage us to participate and sell Guyana for what it is. A lot of people don’t know, but when they come, they are so in awe,” Walrond said.

Touching on some of the aspects of Capoey that would need her Ministry’s attention, she added, “We know that we’re starting from scratch, and that there’re things that need to be done to build out, the roads have to be done. When we came here as cabinet a few months ago, the Toshao said the smaller roads they needed assistance with. So, it’s a process.”

While the Minister and her company were all fascinated with what Hendricks had to share, the thought that lingers is that there is so much more of Capoey left to be discovered, and of course many more stories to be told.

“I hope your experience here will tell you something. When you go back, you will tell your friends, your family, ‘Come back to Capoey and visit’,” Toshao Hendricks said with a smile. [First published in the Guyana Times]