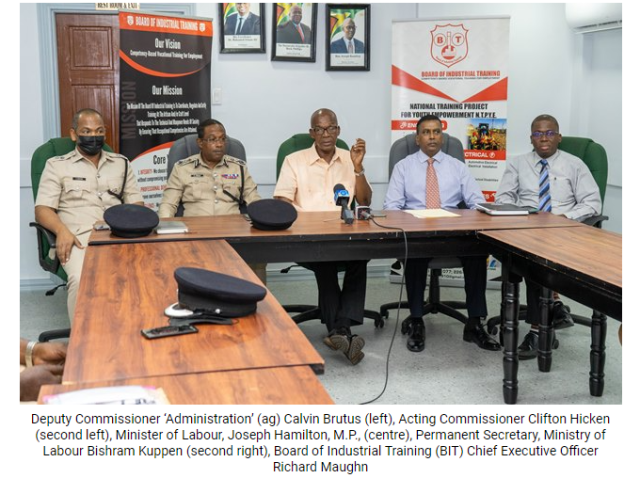 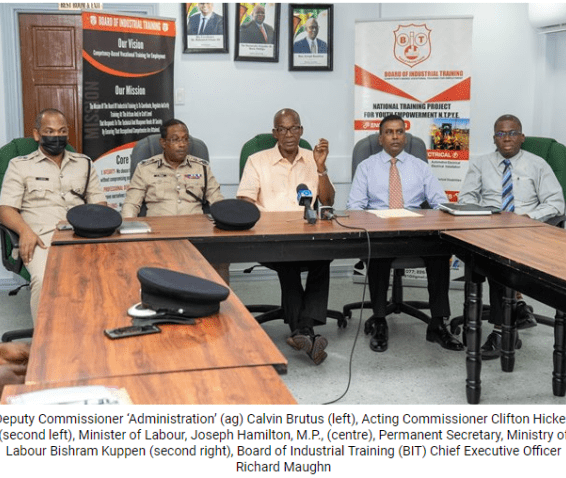 The Ministry of Labour and the Guyana Police Force (GPF) on Tuesday, signed two agreements aimed at offering training to youths in vulnerable communities and retired police personnel.

The latter training will prepare police personnel for life after the Police Force.

Minister Joseph Hamilton, in brief remarks, said that for the youths, the aim is to equip them with skills and knowledge to become employable or entrepreneurs. Hence, the Police Force’s presence is needed, as it has already established relationships with these communities to assist the Ministry in identifying their social issues.

A similar programme has been held in the Kaneville community which is located behind the Grove Housing Scheme on the East Bank Demerara.

Those who complete this training will then be given the opportunity to utilise the Central Recruitment and Manpower Agency.

Beyond training programmes, the second agreement would allow the Ministry’s Co-op Department to partner with the Police Force to strengthen the duties of its Co-operative Society to secure the members’ interests.

“It will deal with how the co-op department cooperate with the police as they have a co-op society or I should say a credit union and so that kind of relationship we want to develop going forward,” the Minister stated.

This long-term collaboration, the Minister noted, is in keeping with efforts to provide such training to citizens to create a skilled workforce to assist in the country’s development.

Acting Commissioner of Police, Clifton Hicken, said this partnership plays into the Force’s 2022-2026 strategic plan for a more skilled and professional organisation, which would play a greater role in community development.

“We attempt to use what is available to us in terms of skillset, and we call it vocational training skill. Whenever we go into the community…we are preparing them for the field of work and so this by itself will add value to the community,” he noted

He added that this initiative, “is going to change the concept of the press and stigma and so it will encourage youths to be focused on more important issues that they can be involved in that can develop Guyana.” 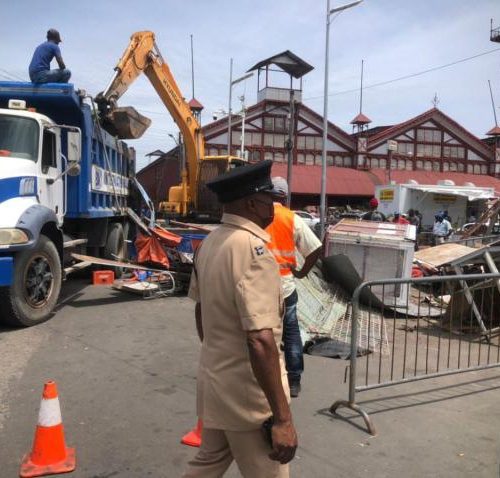 About 12 policing districts will play a role in this initiative.

The public will also be kept informed of which community will be benefitting from the training initiative via a monthly report.

A foundation will also be established to create a more transparent and sustained way for the youths to benefit. Funded by the private sector, it will comprise members of co-operative societies, and the media fraternity among other prominent community figures.

Mr. Hicken revealed that officers will also benefit from this training programmes to assist in the maintenance of their machinery.

Additionally, the Ministry is exploring options to provide Occupational Safety and Health training to officers to address work-related deaths and incidents.