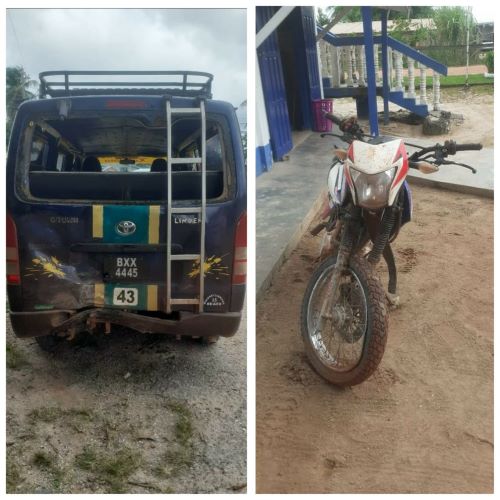 A motorcyclist is hospitalised with a fractured skull following an accident on the Kwakwani Trail, Upper Berbice River, involving his bike and a minibus earlier this morning.

The injured man has been identified as Glenton Lyte of Hururu Mission, Berbice River. A passenger of the minibus also received minor injures.

According to police reports, the incident occurred sometime around 04:30 hours today.

It was reported that minibus #BXX 4445 was proceeding north at a moderate speed on Kwakwani Trail and as the driver approached Bamboo Road, he put on his indicator to turn right into the said road.

As the driver was negotiating the right turn, he felt an impact at the rear of his minibus.

After of years of waiting, some citizens finally receive NIS pension

Corwin Hartman, who was a passenger seated in the rear seat of the said minibus received injuries about his body.

The driver of the said minibus picked up the driver of the motorcycle in an unconscious state, and along with the injured passenger, took them to the Kwakwani Hospital Complex where they were both seen and examined by a doctor on duty who treated and later transferred them to Linden Hospital Complex where the passenger was admitted a patient in a stable condition while the motorcyclist was further transferred to Georgetown Public Hospital in an unconscious condition suffering from a fractured skull.

The investigation is ongoing.