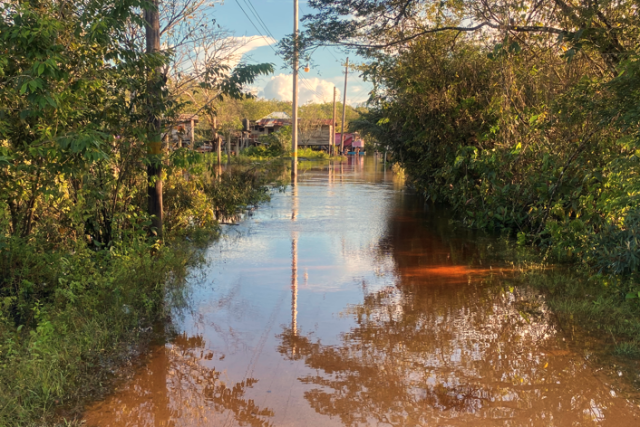 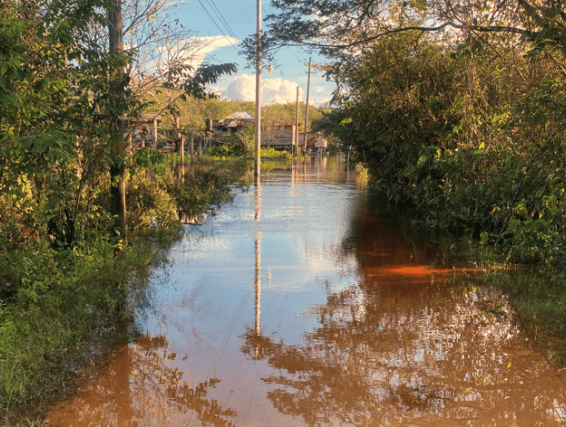 Residents of Kwakwani, Region Ten (Upper Demerara-Berbice) are battling another flood in the space of two months, due to the overtopping of the Berbice River as a result of the recent downpours.

On Tuesday, floodwaters had already risen three feet in some areas at Lamp Island, and some residents have begun making efforts to relocate to higher grounds. Meanwhile, the majority are monitoring the water levels closely on a daily basis.

Regional Vice Chairman of the Kwakwani Neighbourhood Democratic Council (KNDC), Cort Simeon, told this publication the KNDC is prepared to assist residents if they make the request to be evacuated, but, at the same time, he added that, having an immediate shelter may be challenging, since the schools which were previously used are back to normal teaching.

“We are not sure about shelters. The last time (in 2021) we used schools, but schools are now back in place,” he said.

Most importantly, the Vice Chairman noted, the KNDC is working closely with the Regional Democratic Council (RDC) and the Civil Defence Commission (CDC) to provide much-needed support, and to seek out alternatives to be used as shelters.

Kwakwani recorded its worst flood back in 2021, when 80 per cent of the residents of flood-prone areas had to be evacuated and placed in shelters, or with families who were on high lands.

Water levels were as high as between 12 and 15 feet in some areas, and many homes were submerged. High lands or lands that had never been impacted by floodwaters over the years were heavily flooded. Since then, water levels are yet to recede to their normal heights.

Life after the worst flood

While many people have returned home to rebuild their lives, there are a few who chose not to. “Since last year we move out from home, only our electrical appliances at home,” Dennese Mathews told this publication, adding that floodwaters had caused her home to be practically inundated.

Matthews, her husband and her three children, of Lamp Island, have since been residing at the ‘Old Fuel Bay’ (uphill at the entrance of Lamp Island), where she believes they are much safer in a small makeshift house. They operate a confectionery and grocery business as a means of providing for their daily needs. 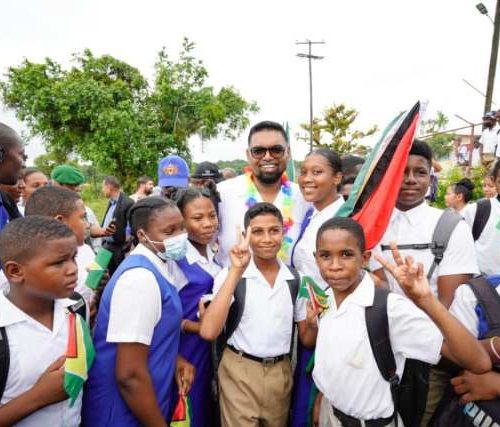 Immediate needs of Bartica schools to be addressed—President Ali

The woman, who is accustomed to ploughing the farm, has said her family are yet to return to their farmlands, as doing so is impossible with limited “dry weather” subsequently of 2021 floodwaters receding to date after losing tons of produce.

In addition, 32-year-old Sunita Fredricks, a mother of eight who also resides at Lamp Island, has said she has been preparing for this year’s flooding by cleaning a spot she has located on high grounds to relocate, but it has been somewhat challenging for her, as finance is her major setback.

Fredricks said although the water did not recede completely, she has been planting in discarded containers in an effort to sustain her family, but sadly, her flourishing crops are now underwater.

She and her family were the first to be accommodated at the shelter at the Kwakwani Primary School last year, as her home was submerged.

Meanwhile, with flooding being reported in several other areas in Region 10, including Rockstone, the CDC is urging persons to take all necessary precautions as the May/June heavy rainfall is expected to continue over the coming weeks.