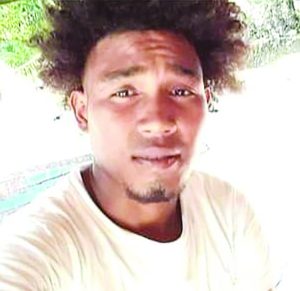 Twenty-four-year-old Christian Joseph, also known as “Son Son” who was wanted for allegedly setting fire to 22-year-old Sheldon Harry and his Venezuelan girlfriend during a row at Puruni Landing, Mazaruni River (Cuyuni-Mazaruni) was apprehended on Thursday.

Based on reports received, Joseph of Kitty, Georgetown was captured at about 04:00h at ‘Top Side’ Puruni, Region Seven (Cuyuni-Mazaruni).

Sheldon Harry and Gracey [left] and the suspect [right]He was escorted to the Bartica Police Station where is he expected to be questioned in relation to murder and attempted murder committed on Henry and his girlfriend which was committed on June 6.

It was reported that more than two weeks after the incident, Harry succumbed to his injuries while receiving medical attention at the Georgetown Public Hospital. His girlfriend was reportedly discharged after spending a few days in the medical facility.

It was reported that on the day in question, an argument erupted between Joseph and his girlfriend during which he threatened to harm her.

Harry reportedly attempted to calm him down but instead, the man left the camp and returned with a cutlass, and advanced toward his girlfriend. At that time, Harry intervened and this angered the suspect.

In retaliation, Joseph turned on Harry’s girlfriend and physically assaulted her. This, however, led to an argument between the two men. During the argument, Joseph reportedly left the camp but later returned with a bucket of gasoline and a piece of stick that was already alight. 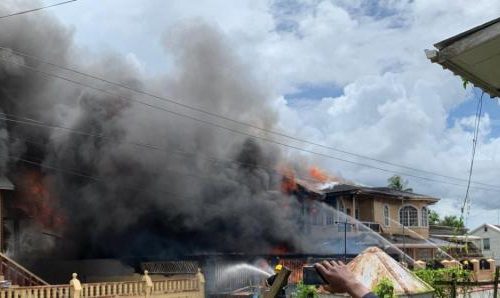 Upon seeing this, Harry and his girlfriend attempted to escape but Joseph went after them. He reportedly cornered them, dowsed them with the gasoline, and set them on fire.

After realizing what he had done, the suspect reportedly turned around and started to throw sand on Harry with the aim of putting out the blaze. However, after seeing the severity of his friend’s burns, he buckled from the scene.

Harry and his girlfriend – both sustaining burns about their bodies managed to make it to a pharmacy at the landing, where they were later transported to the hospital in the community and then medevacked to the Georgetown Public Hospital where they were admitted in a critical state.

The female sustained injuries to her hands, chest, neck, and side while Harry received second and third-degree burns on about 80 per cent of his body.