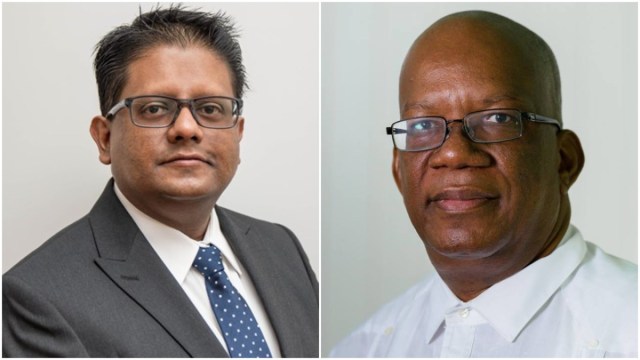 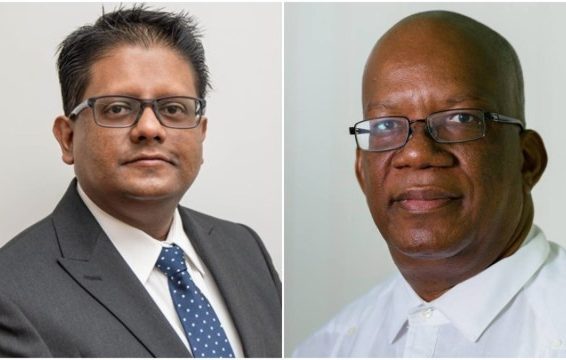 Jordan was “sleep-walking” as Finance Minister – Govt responds to “misrepresentations”

The attention of the Ministry of Finance has been drawn to a number of pronouncements made by former Minister of Finance Winston Jordan, during his increasingly frequent forays in the media in recent times. It is a matter of public record that Jordan has frequently described himself as a professional. Regrettably, his recent pronouncements reinforce the widely held and very credible view that he is at best a grossly incompetent professional and at worst a downright dishonest one.

Indeed, many of his pronouncements constitute a clear attempt to mislead the people of Guyana with blatant distortions and misrepresentation of facts. Alternatively, they indicate that he was sleep-walking through the last five years during which he was “the least impressive of all of the Finance Ministers since the first self-Government Administration at the beginning of 1950” in the words of Freddie Kissoon.

Mr Jordan is quoted in the November 8th Edition of the Kaieteur News as saying, “what I found to be astonishing was that the letter to the Chinese Ambassador, requesting the loan, was signed by a senior official of the Ministry of Finance and copied to the President, Vice President, the Senior Minister in the Office of the President with responsibility for Finance, among others… Section 58 (1) of the Fiscal Management and Accountability Act 2003 (FMAA) reposes in the Minister of Finance the sole authority to borrow on behalf of the Government of Guyana.”

In doing so, he sought to repeat an accusation he made previously that there is somehow something irregular about an official signing such letters instead of the Minister.
The Laws of Guyana are crystal clear. Only the Minister responsible for Finance can contract loans on behalf of the Government of Guyana. This is enshrined in the External Loans Act and it is reinforced in the FMAA. As a result, in practice, only the Finance Minister signs loan agreements on Guyana’s behalf. This has been in place since time immemorial, and has always been honoured, even during Jordan’s lacklustre tenure which was marked by repeated breaches and illegalities.

However, while the Finance Minister is the only authority empowered to sign loan agreements, it is routine practice for senior technical staff of the Ministry of Finance to communicate with donors and development partners throughout the project cycle, including at the earliest stages of mobilising resources to fund projects. Indeed, the Head of the Project Cycle Management Division, which division is charged with responsibility for resource mobilisation, has always been the lead Government interlocutor with development partners and has been engaged in communication with development partners on issues of resource mobilisation for many, many years.

Attached to this release are a number of examples of such letters in which this same official wrote donors – during Jordan’s tenure – requesting loan financing for several different projects.

For Mr Jordan to insinuate that there is something irregular about this, is a clear indication that he is either woefully unfamiliar with a well-established practice that continued under his tenure (the question of Jordan feigning ignorance of what was transpiring in his own Ministry and under his watch will be returned to shortly), or that he is aware of this practice but would still dishonestly seek to insinuate that something is irregular about it, in an obvious attempt to mislead those who don’t know otherwise.

The fact of the matter is that there is absolutely nothing irregular about the letter to which Jordan is referring, and he should be aware of this if he had any modicum of familiarity with the law and semblance of familiarity with a long-established practice in the Ministry.

In his most recent foray in the media, Jordan also attempted to give the impression that the APNU/AFC Government of which he was a part had crafted a superlative Natural Resources Fund (NRF) (letter in SN of November 8, 2021, under caption “The coalition sought an NRF of the highest calibre”). Here again, his letter is replete with brazen misrepresentations.

He asserts that “the NRF Act was the product of extensive national and international consultations”, but conveniently omitted to disclose that that Act was rushed through the National Assembly after his Government had already lost the No-Confidence Motion (NCM) and had therefore lost their mandate to govern. Well after the Government had fallen, in total disregard for the clear consequences that are constitutionally due to flow from a NCM, Jordan’s Government rushed in January 2019 to sneak the NRF Bill through Parliament with no Opposition participation and no Opposition input.

This is the single most important piece of legislation to have been enacted in many years, and the APNU/AFC Government saw nothing wrong with sneaking it through Parliament at a time when they had lost their mandate to govern, when they were widely regarded as an illegal and illegitimate Government, and without any Opposition input whatsoever. Yet, Mr Jordan now has the audacity to speak of “extensive national and international consultations”.

Mr Jordan then goes on to attempt to hide behind the reputations of two professionals from the Commonwealth Secretariat and two Ministry of Finance officials, in his attempt to assert the quality of the NRF Act. Without any disrespect intended to any of these four distinguished professionals, it is apposite to note how subject matter experts have assessed the same NRF Act.

Amongst the observations made by that assessment are the following:

* “The objectives and design of the NRF raise several issues. The fund on its own cannot achieve the objectives that have been set for it. The rigid withdrawal rules may do little to foster stabilisation or saving but may entail fiscal costs” (p. 270)
* “The formula for the maximum permissible withdrawal is among the most complex operational rules for a resource fund in the world. Its design departs from good practices”. (p. 271)
* “State-of-the-art advice based on international experience and good fiscal management principles emphasizes simplicity, flexibility, transparency, and close integration with the budget and public asset-liability management. The rule’s complexity may also conspire against fiscal transparency and public understanding.” (p. 271).

The irrefutable fact of the matter is that the NRF Act in its current formulation was a piece of legislation which was very poorly conceived, and was “rammed down the throats” of the nation during a period when the APNU/AFC was in a state of illegality and illegitimacy. While it must be recalled that this NRF Act (which Mr Jordan so proudly and presumptuously touts in his letter) was passed during a period that his Government was occupying an illegal period in office, it must also be noted that his letter serves as the most recent reminder of his Government’s prevarications that the law does not mean what it says and that 33 votes in the National Assembly are not greater than 32.

Jordan, also in his most recent letter, speaks of a burgeoning overdraft of the Consolidated Fund. It is a matter of public record that it is Jordan who ignored the advice of the International Monetary Fund as well as his own technical staff, and refused to address the rapid accumulation of the overdraft during his tenure. It is also a matter of public record that it is this PPP/C Government that has regularised that overdraft, securitising it with appropriate debt instruments, and putting in place arrangements to ensure that the fiscal operations of Government are adequately financed without recourse to re-accumulation of the overdraft. Despite this publicly known fact, Jordan soldiers on, continuing to repeat yet another falsehood.

Mr Jordan’s most recent misrepresentations are a reminder of the chronic behaviour he displayed throughout his tenure in office.

Even more astonishingly, Jordan famously denied any knowledge of the existence of the signing bonus, long after his own Ministry had requested in writing the opening of a special bank account to receive the funds. As if this were not enough, he would then stumble over one excuse after another trying clumsily to feign ignorance of the illegality he facilitated: firstly, that he knew nothing about the bonus, secondly that he thought it was a gift, and thirdly that the individual who negotiated the bonus (apparently by this time he knew who had negotiated it) had misled the APNU/AFC Government.

A Pattern of Behaviour

History is replete with examples of Winston Jordan trying to mislead the nation. It would be recalled that at one of his first sittings in Parliament in 2015, he attempted to mislead the nation by quoting incorrect debt numbers, a matter on which, after he was challenged on the accuracy of his statements, he would subsequently reluctantly apologise to the Assembly for the misinformation he was caught peddling redhandedly and for creating an erroneous impression.

The repetition of falsehoods and misrepresentations by Winston Jordan is a clear pattern of behaviour. It points clearly to either a complete dereliction of duty to the point where he apparently was unaware of everything, or a woeful lack of knowledge of established norms and practices, or a deliberate and sudden amnesia, or downright dishonesty in order to hoodwink the public and score cheap political points.

What is clear is that Winston Jordan has no reservations deploying all manner of misrepresentations as he seeks belatedly to acquire some semblance of relevance and as he desperately tries to repair the strikingly lacklustre mishap that his ministerial tenure constituted.

In the final analysis, these public pronouncements provide ample illustration that, contrary to his often-repeated self-proclamation as a professional, Winston Jordan has no hesitation to distort facts in order to mislead the nation.

It would appear that the APNU/AFC needs Winston Jordan to crawl out every now and then, to ramble on economic matters given the obvious and glaring void on their parliamentary benches. Sadly, for them, his occasional forays serve more to discredit them and reinforce their now unshakeable reputation for incompetence and dishonesty.