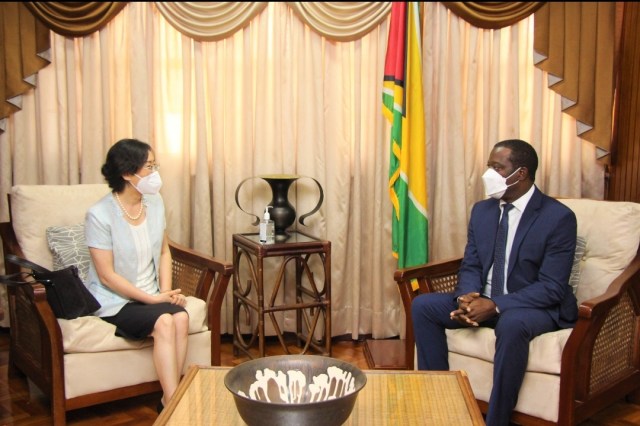 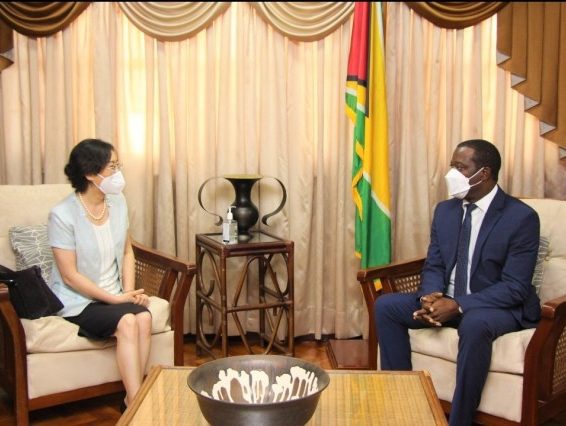 Minister Todd extended a warm welcome to the Ambassador and noted that her presence serves well for the continuity of Guyana-China relations. He highlighted that collaboration between Guyana and China continues to grow stronger and spoke of the significant contributions made by China to Guyana’s development agenda, especially in the public infrastructure sector.

In this regard, the Foreign Minister recalled China’s role in transformative projects in Guyana such as the Convention Centre, the airport expansion, construction of major roads and bridges among others.

The Chinese Ambassador conveyed greetings on behalf of His Excellency, Mr. Wang Yi, State Councilor and Foreign Minister of the People’s Republic of China and expressed her desire to continue the work towards further enhancing China-Guyana relations. Ambassador Guo Haiyan alluded to the upcoming Fiftieth (50th) Anniversary of Diplomatic Relations between Guyana and China and noted that the Chinese Embassy is planning to observe that momentous anniversary.

Minister Todd agreed that the commemoration also holds great meaning for the Government and the people of Guyana as it demonstrates deep friendship, growth in relations, and prospects for future cooperation between Guyana and China.

The Foreign Minister also commended China for its global outlook and its attention to developing countries. He expressed gratitude for China’s assistance towards addressing the COVID-19 pandemic, through the provision of personal protective equipment, ventilators, and other medical supplies.

The Minister noted that at the multilateral level, Guyana and China share common principles, including commitment to the rule of law, respect for sovereignty and territorial integrity and non-interference in internal affairs. Minister Todd also reiterated Guyana’s unswerving commitment to the One China Policy.

Both Minister Todd and the new Ambassador agreed that mechanisms such as the Joint Economic and Trade Committee and Joint Private Sector Council provide amicable avenues for advancing cooperation between Guyana and China. In addition, they agreed that such frameworks will facilitate the promotion of closer ties between the private sectors of Guyana and China, for the mutual benefit of both sides.

The Foreign Minister and the Ambassador agreed to continue working towards developing bilateral relations and cooperation for the benefit of the citizens of Guyana and China.

This meeting was the first between the Foreign Minister and the newly accredited Chinese Ambassador to Guyana, since she presented her credentials to President Dr Irfaan Ali, on October 29, 2021.